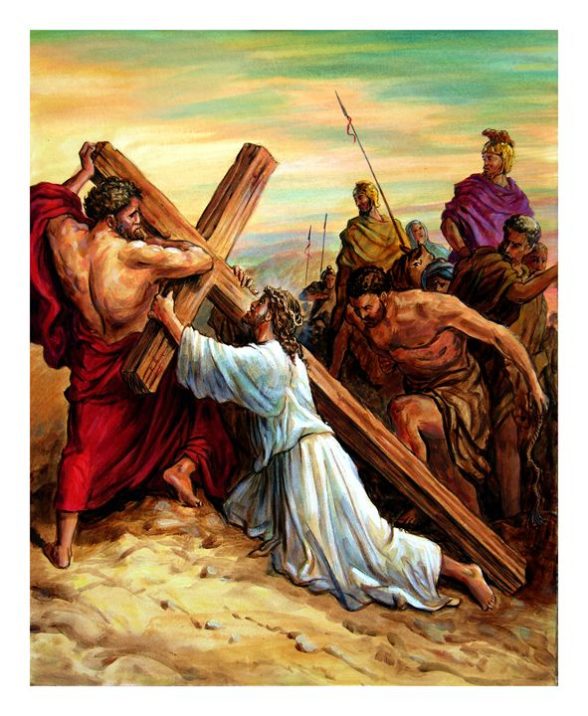 Over the years too many people have died without realizing God’s love in Christ. Does Jesus really love you, or are those just words?

They say that actions speak louder than words; perhaps reading about some actions will clarify this matter.

“For I received from the Lord that which I also delivered to you: that the Lord Jesus on the same night in which He was betrayed took bread; and when He had given thanks, He broke it and said, ‘Take, eat; this is My body which is broken for you; do this in remembrance of Me.’ In the same manner He also took the cup after supper, saying, ‘This cup is the new covenant in My blood. This do, as often as you drink it, in remembrance of Me.’ For as often as you eat this bread and drink this cup, you proclaim the Lord’s death till He comes.” 1 Corinthians 11:23-26.

Everything the Lord did from washing the disciples feet at supper through the first three hours on the cross was for others.

He was arrested at night bound rudely and led through the streets like a common criminal to an illegal trial, spat upon, beaten, and mocked; led before four different officials with power to release Him before sentence was reluctantly pronounced by Pilate who could find no fault in Him.

Flogged and beaten beyond recognition, beard pulled out, tired, and desperately thirsty, He was forced to drag His cross until His strength ran out.

“Just as many were astonished at you, so His visage was marred more than any man, and His form more than the sons of men…” Isaiah 52:14.

“He was oppressed and He was afflicted, yet He opened not His mouth; He was led as a lamb to the slaughter, and as a sheep before its shearers is silent, so He opened not his mouth.” Isaiah 53:7.

From nine to twelve o’clock He hung there in the heat of that spring day, and ministered to others.

Interceding for the malefactors who hung Him there; saying, Father forgive them for they know not what they do. He gave His mother into the care of His disciple John. And reassured one of the criminals that today he would be with Him in Paradise.

“Then Jesus said, ‘Father, forgive them, for they do not know what they do.’ And they divided His garments and cast lots. And the people stood looking on. But even the rulers with them sneered, saying, ‘He saved others; let Him save Himself if He is the Christ, the chosen of God.’” Luke 23:34-35.

“Then he [the repentant criminal] said to Jesus, ‘Lord, remember me when You come into Your kingdom.’ And Jesus said to him, ‘Assuredly, I say to you, today you will be with Me in Paradise.’” Luke 23:42-43.

Then the darkness fell from noon to three p.m. Man had done all he could do, it is here in the dark where Jesus became the offering for sin and God began to extract the terrible price of the sin of all mankind.

The sin offering is completely burned up; they took a body down from the cross, but they could not see what was done to the soul. It is toward the end of these three hours that Jesus cried out in anguish.

“My God, My God, why have You forsaken Me? Why are You so far from helping Me, and from the words of My groaning? O My God, I cry in the daytime, but You do not hear; and in the night season, and am not silent. But You are holy, who inhabit the praises of Israel. Our fathers trusted in You; they trusted, and You delivered them. They cried to You, and were delivered; they trusted in You, and were not ashamed.” Psalm 22:1-5.

Throughout Israel’s history righteous men called out to the Lord in time of trouble and He helped them; but to the cries of His Son, His only begotten Son, He remained afar off.

God did not help Jesus the only truly righteous Man because God loved us and His Son was paying for our sins.

“For God so loved the world that He gave His only begotten Son, that whoever believes in Him should not perish but have everlasting life.” John 3:16.

“But I am a worm, and no man; a reproach of men, and despised of the people. All those who see Me laugh Me to scorn; they shoot out the lip, they shake the head, saying, ‘He trusted in the Lord, let Him rescue Him; let Him deliver Him, since He delights in Him!’” Psalm 22:6-8.

The word for worm here is tola, a worm that when crushed gives off a red color that is used in the East for expensive clothes dyed scarlet. Scarlet literally means, “Splendor of a worm”. We will remember this when we are given white robes washed in the blood of the Lamb.

But as He hangs there He can hear the murmuring in the darkness and recalls the contempt of the crowd and their blasphemous words.

“But You are He who took Me out of the womb; You made Me trust when I was on My mother’s breasts. I was cast upon You from birth. From My mother’s womb You have been My God. Be not far from Me, for trouble is near; for there is none to help.” Psalm 22:9-11.

Jesus was ever God even from birth and He trusted His Father without ceasing from that time on; no man can say that.

“Many bulls have surrounded Me; strong bulls of Bashan have encircled Me. They gape at Me with their mouths, as a raging and roaring lion.” Psalm 22:12-13.

These strong bulls of Bashan are a clean animal used for the sin offering. These strong bulls are a picture of the religious leadership who should have welcomed the Messiah with open arms; instead, they surround Him, gape at Him, roar at Him viciously like a roaring lion waiting to devour Him.

“I am poured out like water, and all My bones are out of joint; My heart is like wax; it has melted within Me. My strength is dried up like a potsherd, and My tongue clings to My jaws; You have brought Me to the dust of death.” Psalm 22:14-15.

The agony of crucifixion is described as the Lord felt it. The horrific pain of hour after hour of hanging with His bones all out of joint, the maddening thirst, and the ebbing away of His bodily strength.

Vicious dogs who scavenged the streets represent the Gentiles. In this case they are Roman soldiers who surround Him as guards and as executioners they drove the nails through His hands and feet and gambled for His garments.

This was written about one thousand years earlier when crucifixion was rare and quite likely unknown to the writer, much less be able to describe it in detail. These are prophecies given by God.

“But You, O Lord, do not be far from Me; O My Strength, hasten to help Me! Deliver Me from the sword, My precious life from the power of the dog. Save Me from the lion’s mouth and from the horns of the wild oxen! You have answered Me.” Psalm 22:19-21.

Here Jesus calls upon the Father to deliver His precious life from the hounds of hell and Satan the ravening lion. Utterly dependent on His Father to rescue Him, Jesus commits Himself to Him. The proof of this is Jesus’ triumphant call at His resurrection, “You have answered Me.”

The ox (oxen) referred to here is actually the Aurochs an extinct, huge, wild ox, with broad, sharp horns. In ancient times men were executed by tying their hands and feet to these horns, the ox was then set free to batter the poor victim to death.

How cruel men can be, especially when goaded on by the demonic world, which were especially active during the Lord’s crucifixion.

Consider these aspects of the Lord’s death, when His glorious resurrection is celebrated this coming Easter Sunday.

Permit me one more thought before I close. New Years is the time when folks make their yearly resolutions, perhaps we could take this opportunity to make another resolution.

Let us resolve to seek the Lord daily in prayer, for those we love, for peace, revival, to give thanks, and especially for His return to take us all home.

“The effective, fervent prayer of a righteous man avails much.” James 5:16b.

Have a lovely Easter; and always remember that Jesus does love you.