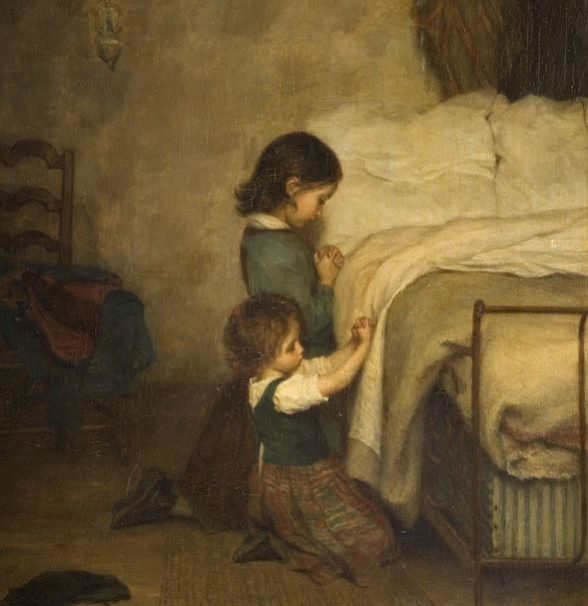 In Unfeigned Faith, Part 1 we examined the aspects of true faith and how to maintain it through the years, even increasing in it. The following verses show more on how to do this.

“Study to shew thyself approved unto God, a workman that needeth not to be ashamed, rightly dividing the word of truth.” 2 Timothy 2:15. King James Version.

“Rejoice always, pray without ceasing, in everything give thanks; for this is the will of God in Christ Jesus for you.” 1 Thessalonians 5:16-18.

“And let us consider one another in order to stir up love and good works, not forsaking the assembling of ourselves together [in church], as is the manner of some, but exhorting [encourage greatly] one another, and so much the more as you see the Day [the return of Christ] approaching.” Hebrews 10:24-25.

There are those however that do not continue to build their faith on the godly principles laid out in Scripture. And they soon suffer shipwreck in the treacherous seas far from the safe harbor of Jesus Christ.

“Nevertheless the solid foundation of God stands, having this seal: ‘The Lord knows those who are His,’ and, ‘Let everyone who names the name of Christ depart from iniquity.’ But in a great house there are not only vessels of gold and silver, but also of wood and clay, some for honor and some for dishonor. Therefore if anyone cleanses himself from the latter, he will be a vessel for honor, sanctified and useful for the Master, prepared for every good work.” 2 Timothy 2:19-21.

The first sentence (verse 19) of the above passage indicates to us that the Lord is speaking to Christians, and then verse twenty begins with the word “but”. God here tells all who name the name of Christ to depart from iniquity, but in such a great house, there are Christians both honorable and dishonorable.

Sad to say, this is an unpleasant fact and completely unnecessary since God empowers all to live godly in this world. Scripture here speaks of vessels for honor and some for dishonor.

How can this be if Paul really is referring to Christians? This is an impossible question to answer to everyone’s satisfaction.

Still there are some vessels of dishonor spoken of in Scripture.

First, make no mistake; God did not create anyone to be a vessel of dishonor, whether Christian or non-Christian.

King Saul of Israel is an excellent example of a vessel of dishonor. King Saul was a believer and is now in heaven. I feel it is a common mistake to think that Saul is in hell, and while the reasoning is sound enough, the character of God militates against this belief.

God, after many years of warning Israel not to take on the ways of the nations around them and to avoid ungodliness is certainly not going to put an unsaved king over a people called to be a kingdom of priests for His name (Exodus 19:5-6).

Saul was right before God in the beginning but over time his petty nature began to take over, self-centeredness was there all along, but it took the corruption of power to draw it out for all to see.

In time God allowed a vexing spirit to torment him, this was to show Saul to what depths of selfishness he had sunken to. Not through mean spiritedness on God’s part, but because Saul had opened the doors himself. It was God’s desire that Saul return to Him, and repent to cleanse himself of such things that he might become a vessel for honor.

Just think of it, a king having to cleanse himself to become a vessel for honor. No matter what your class, the question remains, what sort of vessel are you?

Do not look at your degrees, certificates, or the letters after your name, whether you are a clergyman, elder, or doctor, the issue is, are you self-centered or Christ-centered?

This is what it takes to become a vessel for honor, and God searches our hearts to bring these things out.

“I, the Lord, search the heart, I test the mind, even to give every man according to his ways, and according to the fruit of his doings.” Jeremiah 17:10.

As you can see what you say, and what you do can affect your life for good or bad.

King Solomon was the wisest of all men, with riches, possessions and power beyond imagination; he was surely the perfect vessel. Even with all this I do not believe that it was pride, power, or selfishness necessarily that caused his downfall, but rather lack of self-control.

Solomon was godly enough, though in time his many foreign wives led him astray. All that wisdom and our adversary the devil was still able to rob Solomon of his reward. Are you wiser than the wisest of men? Beware lest the devil deceive you and rob you too.

The Lord blessed King Uzziah mightily and he had much land (it says, for he loved the soil), great military power, and made many improvements in Israel.

“But when he was strong his heart was lifted up, to his destruction…” 2 Chronicles 26:16a.

The king decided to burn incense on the altar of incense in the temple of the Lord and as the priests were trying to usher him out leprosy broke out on his forehead, and he lived the rest of his life a leper.

“Pride goes before destruction, and a haughty spirit before a fall. Better to be of a humble spirit with the lowly, than to divide the spoil with the proud.” Proverbs 16:18-19.

We are taught in Proverbs that sometimes blessings and praise can be a greater test of character than curses and adversity.

“The crucible is for silver and the furnace for gold, and a man is tested by the praise accorded him”, Proverbs 27:21 New American Standard Bible.

This was a good king destroyed by believing his own press.

We too, even though we are nothing in power and prestige compared to this man, will be tested by the praises of those around us and by the most insignificant of successes. And I mean this whether you are the president of a huge corporation or running a small mailroom.

“Therefore, since all these things will be dissolved, what manner of persons ought you to be in holy conduct and godliness, looking for and hastening the coming of the day of God, because of which the heavens will be dissolved being on fire, and the elements will melt with fervent heat?” 2 Peter 3:11-12.

The great pyramids will be gone after thousands of years of standing against weather and time. All the great landmarks of mankind will cease to exist, even the Grand Canyon will cease and its majesty be forgotten. Of what have we to boast?

God gives us purpose and a heritage. Let us determine not to think more highly of ourselves than we ought.

Ananias and Sapphira a husband and wife in Acts chapter five, sold a piece of property and were to give the profit to the church, as many others were doing, however they decided to keep some of the money for themselves without telling the apostles. Peter confronted the husband and said the following.

“While it remained, was it not your own? And after it was sold, was it not in your own control? Why have you conceived this thing in your heart? You have not lied to men but to God”, Acts 5:4.

They sold their own property and it was theirs to keep the profits or give any portion to the church, but to avoid looking greedy they lied about the amount of money they received, thus lying to the Holy Spirit, for this, they lost their lives.

Greed made them an unclean vessel, and in this case, they lost their opportunity to cleanse themselves and become a vessel of honor.

“Be diligent to come to me quickly; for Demas has forsaken me, having loved this present world, and has departed for Thessalonica…” 2 Timothy 4:9-10.

Demas a clean vessel having become unclean and a picture of a hypocritical faith; the love of the world takes Demas down and cheats him of his reward. Scripture warns of this:

John tells us here that the world is passing away, the reality though, is that we will pass away much sooner than it does, this is certain. God refers to our life as being measured out in hand spans.

“Lord, make me to know my end, and what is the measure of my days, that I may know how frail I am. Indeed, You have made my days as handbreadths, and my age is as nothing before You; certainly every man at his best state is but vapor. Selah” Psalm 39:4-5.

Demas had forgotten all this and had given away his life for a mess of pottage (see Jacob and Esau in Genesis 25: 29-34).

Scripture, incidentally, has this to say about Esau.

“…lest there be any fornicator or profane person like Esau, who for one morsel of food sold his birthright. For you know that afterward, when he wanted to inherit the blessing, he was rejected, for he found no place for repentance, though he sought it diligently with tears.” Hebrews 12:16-17.

By despising his birthright, Esau also despised God, choosing the world and its pleasures rather than the blessings of God.

Esau has been dead some four thousand years, Demas, nearly two thousand years, the things they desired have long since perished and the worldly treasures they might have gained are far beyond their reach now.

While we vacillate between the world and a life for Christ, time runs through our fingers like water. Now is the time to decide whom you will serve, the handbreadth of your life becomes shorter by the second and there will be no redo. Do you have unfeigned faith?