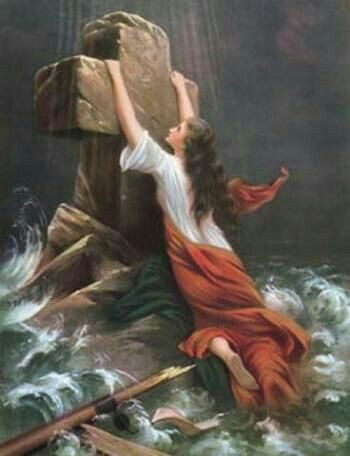 Psalm 91 is one of sixteen Psalms that are called Messianic Psalms; they are prophetic Psalms revealing the Messiah (Christ) to come. Psalms 2, 8, and 22 are three that you may know.

Psalm 91 is one of these Messianic psalms.

“Surely He shall deliver you from the snare of the fowler and from the perilous pestilence.” Psalm 91:3.

Phishing is a good example of the snare of the fowler. In computer language, phishing is a scam to get on-line users to divulge personal information, such as passwords, banking information, or anything confidential that may assist the one phishing (as in, fishing, to bait the hook to victimize someone) in robbing you.

A malicious hell bound sinner will send the victim a very official looking e-mail from some trusted institution, requesting personal details such as, pin numbers, credit card information, or social security number in an effort to rob you.

The notice may be worded in this manner, “There has been a certain sum of money withdrawn from your account at a foreign location. If this was not you, please click onto our website so we can gain the information we will need to investigate this fraud.”

Once you do that, they will request the information they need to steal your identity, or simply to clean out your account.

It is even possible that your computer may be ransacked for the information it contains.

Because these notices are meant to make a person fearful, the immediate response is to click onto the website.

Do not do that, contact your bank or whoever supposedly notified you and verify the information you were given, and deal with your bank or institution directly.

At the same time be sure to tell the institution you do business with of the false notification so they can start a real investigation.

Remember, if you do not do something, someone else will be violated by these vile persons.

Scripture tells us that we are to love our neighbor as ourselves; crime will decrease when it is reported and investigated.

I am not an expert on these things, so you should really investigate phishing and other scams on your own to know how to handle it right.

This is “the snare of the fowler”; a fowler is a hunter of birds and the snare is the trap, and the fowl does not usually come out well; God guards those who cling to Him as their refuge and fortress.

Beware though, phishing is not the only thing that may be considered a snare; an ambush in warfare is much like a snare.

An ambush at work comes when someone wants your position or is jealous of you, or they may just hate you; if they are cunning enough they may ensnare you.

Evil men ensnare innocent young ladies and very often vulnerable older women and violate or impoverish them. The seductress ensnares the husband and destroys his marriage.

Worldly philosophies or religions ensnare naïve young men and women leading them into a life of hopelessness, and an eternity in hell.

The desire for riches ensnares the greedy and ruins their life, and the lives of others who may be ensnared by them.

“Deliver me, O Lord, from evil men; preserve me from violent men, who plan evil things in their hearts; they continually gather together for war. They sharpen their tongues like a serpent; the poison of asps is under their lips. Selah. Keep me, O Lord, from the hands of the wicked; preserve me from violent men, who have purposed to make my steps stumble. The proud have hidden a snare for me, and cords; they have spread a net by the wayside; they have set traps for me. Selah.” Psalm 140:1-5.

Israel continually followed after idolatrous religions, leading God to say this of them:

“A man who flatters his neighbor spreads a net for his feet.” Proverbs 29:5.

“The fear of man brings a snare, but whoever trusts in the Lord shall be safe.” Proverbs 29:25.

“…the perilous pestilence.” Psalm 91:3b, the King James renders this the “noisome pestilence”. Noisome means ruin or fall, with the emphasis on calamity, destruction.

So perilous or noisome is calamitous or destructive pestilence. With one other interpretation giving it as a deadly pestilence, and a pestilence is a plague, all quite ominous.

“For thus says the Lord God: ‘How much more it shall be when I send My four severe judgments on Jerusalem – the sword and famine and wild beasts and pestilence – to cut off man and beast from it?’” Ezekiel 14:21.

We see these four judgments in many places in the world; war in the Middle East, famine in North Korea, wild beasts in India, and AIDS, and bird flu are or have been pandemic in various places.

Plagues, by the way follow famine because starvation and poor sanitation go together. Can you think of any place where all four of these judgments of God exist at once?

Do you believe that God judges the world today? Do the godly perish with the ungodly? Often they do. Is there a refuge?

“He shall cover you with His feathers, and under His wings you shall take refuge; His truth shall be your shield and buckler. You shall not be afraid of the terror by night, nor of the arrow that flies by day, nor of the pestilence that walks in darkness, nor of the destruction that lays waste at noonday.” Psalm 91:4-6.

Do you believe this? Are you nodding your head without realizing the power of this statement?

Do you believe in the God who created the heavens and the earth, and His Son of Whom Scripture tells us.

There is a force that holds atoms together and science does not know what that force is, yet if it were released the atom would explode.

Everything is made of atoms.

Both Christians and many of those who believe in God believe in a God that is powerful, yet few seem truly to believe that God is capable of taking care of them on a day to day basis.

That is not what this psalm says is it? Let us not forget that God is telling us that it is possible to dwell near His heart, in His bosom. That indicates the desire for an intimate relationship on His part.

“A thousand may fall at your side, and ten thousand at your right hand; but it shall not come near you. Only with your eyes shall you look, and see the reward of the wicked.” Psalm 91:7-8.

For thousands of years many soldiers have grasped on to this promise. Even today, from WW II to Korea, Viet Nam, Afghanistan, Iraq, and other deployments, you can speak to men who have narrowly escaped death in miraculous ways; their testimonies glorify God.

This promise becomes even more important to us in the violent climate in which we live today. Terrorism, crime, racial violence, and violent mentally unbalanced men, are a constant fear which plagues our society today.

Jesus tells us that the day is coming when men’s hearts will fail them.

“…there will be signs in the sun, in the moon, and in the stars; and on the earth distress of nations, with perplexity, the sea and the waves roaring; men’s hearts failing them from fear and the expectation of those things which are coming on the earth, for the powers of heaven will be shaken.” Luke 21:25-26.

If you have not fled to the “…secret place of the Most High [El Elyon]” Psalm 91:1a, do so while there is yet time.

“Because you have made the Lord [Yahweh], who is my refuge, even the Most High [El Elyon], your habitation, no evil shall befall you, nor shall any plague come near your dwelling; for He shall give His angels charge over you, to keep you in all your ways. They shall bear you up in their hands, lest you dash your foot against a stone. You shall tread upon the lion and the cobra, the young lion and the serpent you shall trample underfoot.” Psalm 91:9-13.

This is a particularly well known passage because it is the one misquoted by Satan in his temptation of Christ.

“Then the devil took Him up into the holy city, set Him on the pinnacle of the temple, and said to Him, ‘If You are the Son of God, throw Yourself down. For it is written: “He shall give His angels charge concerning you,” and, “In their hands they shall bear you up, lest you dash your foot against a stone.” ’ Jesus said to him, ‘It is written again, “You shall not tempt the Lord Your God.’ ” ” Matthew 4:5-7.

“Then he brought Him to Jerusalem, set Him on the pinnacle of the temple, and said to Him, ‘If You are the Son of God, throw Yourself down from here. For it is written: “He shall give His angels charge over You, to keep You,” and, “In their hands they shall bear You up, lest You dash Your foot against a stone.” ’ And Jesus answered and said to him, ‘It has been said, “You shall not tempt the Lord your God.’ ” ” Luke 4:9-12.

“For He shall give His angels charge over you, to keep you in all your ways. They shall bear you up in their hands, lest you dash your foot against a stone.”

Satan omitted the words “…in all Your ways”, the meaning of these four words indicates that since Jesus did all the things that God told Him to do, omitting “in all Your ways”, would be a blank check, “His angels have charge over You, no matter what You do”.

A small thing, but Satan’s errors come in small things. Do not let anyone quote Scripture to you without confirming it with Scripture on your own.

However, no matter how one interprets the omission of these four words, the Lord’s response tells us something unmistakable, both passages give His answer to Satan as, “You shall not tempt the Lord your God.”

To tempt God is to put Him to the test, to put him in a position where He must act. If Jesus were to cast Himself off the pinnacle of the temple, God would have had to rescue Him, as the statement, “They shall bear You up in their hands…” shows, this would have been a sin.

While Jesus would have achieved rock star status with those at the temple who witnessed His rescue by angels, a sinful savior cannot be the sinless sacrifice for sin, and we would all be destined for hell.

This too is a caution for the Christian, these verses are for us, but we must never forget those words, “in all your ways”. A backslidden Christian is not being righteous in all their ways, so they cannot claim them without tempting God.

It is true that God is merciful and may overrule in grace and the slothful or backslidden Christian may be spared a terrible consequence for their actions.

But it is better to live as a righteous servant than risk dying an unknown beggar.

The more you look at Jesus, the more you have to stare in amazement at His strength of character.

One last thing you should know about the temptation is that when Satan says, “If You are the Son of God”, it is not a question, it is a statement, Satan knew Jesus was the Son of God.

The godly man or woman can also claim these verses 9-13 and they often have; there are stories of missionaries who have had close calls with lions and cobras and have been miraculously protected.

Day to day Christians have been protected in horrendous car wrecks, have missed doomed airliners, and been rescued from murderers.

Countless books could be written about Christians who have dwelt in the secret place of the Most High and felt peace in the midst of chaos, and it is available to all of us.

Do you believe this?