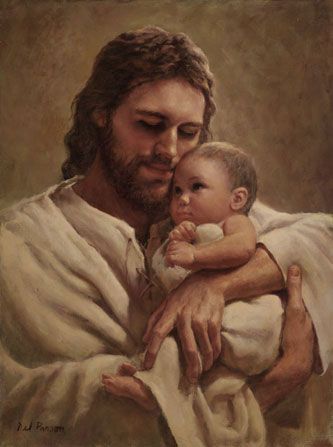 A number of years ago a friend, in complete despair jumped off of a bridge. The reason for his anguish was that his baby had died sometime earlier.

This in itself would be reason enough for most people, but the primary reason was he was convinced that his infant was in hell.

Today as a Christian this man knows better, however he suffered grievous bodily injuries and even though many years have passed he still has internal problems flare up which become life threatening; all that for nothing.

To all of you who have lost babies, parents, brothers, sisters, or best friends; this message is for you.

Limbo, specifically Limbo of Infants, even though it is not a doctrine of the Catholic Church is still believed on by many in the church.

Limbo is the belief that if an infant dies in original sin before infant baptism, they will not enter heaven, but rather go into a state on the edge of hell where it is unlikely that the child will enter heaven, ever.

This state of limbo can either be one of comfortable bliss or one of the mildest of eternal punishment, but they will not see the face of God.

Recent efforts have been made by the church to modify this doctrine to include the intent of the mother to baptize the child upon birth. Her intentions however were thwarted by the little one’s death; yet intent constitutes baptism.

Others change this state to one of bliss with the entry to heaven dependent on the mercy of God. There is not one word or hint of Limbo of any kind in the Bible.

There is a Protestant doctrine called predestination that states that God has created some folks to go to hell and some to go to heaven. They do not have a choice in the matter, though they are punished for not choosing salvation in Christ.

Infants too find themselves condemned to hell since they died before trusting Christ as their savior, the death being confirmation that they were not selected by God to go to heaven.

Why do people who claim to serve a good God continually accuse Him of doing evil?

There are some, who wear a bracelet with the letters WWJD, What Would Jesus Do? Rather than take the word of religious groups who see Scripture from a view tainted with their own prejudices, let us see what would Jesus do.

The most enlightening dialogue on this subject comes when the disciples ask Jesus a question. Jesus not only answers their question but He weaves in another thought which is often overlooked.

This answer is two-fold, “unless you are converted” and “become as little children”.

The first phrase about being converted means to change ones mind, or turn from ones course of conduct; to turn from rejecting Jesus as Messiah and put their trust in Him.

The second phrase, “and become as little children”, is a reference to the humble childlike faith little children have in their parents and which should be the same humble faith the Christian should have in Jesus.

“As you therefore have received Christ Jesus the Lord, so walk in Him…” Colossians 2:6.

So why do they have to be converted? The reference is not to them, but to anyone who wishes to enter the kingdom of heaven. You must be converted to be saved.

“Repent therefore and be converted, that your sins may be blotted out, so that times of refreshing may come from the presence of the Lord, and that He may send Jesus Christ, who was preached to you before, whom heaven must receive until the times of restoration of all things, which God has spoken by the mouth of all His holy prophets since the world began.” Acts 3:19-21.

The “times of refreshing” and the “times of restoration of all things” are a reference to the kingdom of heaven, wherein those who humble themselves as little children are the greatest.

“And it shall come to pass that whoever calls on the name of the Lord shall be saved.” Acts 2:21.

John the Baptist said this of Jesus.

“The Father loves the Son, and has given all things into His hand. He who believes in the Son has everlasting life; and he who does not believe the Son shall not see life, but the wrath of God abides on him.” John 3:35-36.

Having answered the question of who is the greatest in the kingdom of heaven, the Lord goes on to discuss the importance of little children.

He does this, I believe, because children do not have a voice and can be abused, killed, or exploited as they so often are today; so no less a heavyweight than God Himself tells of His love for these little ones and warns of the horror that faces those who cause them to stumble.

The world needs to take this to heart and to realize that even though they may hate God, children are the future.

“And whoever receives one little child like this in My name receives Me.” Matthew 18:5.

Some have interpreted the word child or little one as meaning any Christian particularly new/weak Christians, who are indeed termed as babes in Christ or children of God in other places.

I have no problem with that. But that is not the meaning of this passage, “a text apart from its context is a pretext”.

The very word He is using throughout this passage refers to, an infant, little boy or girl, children; it is the same word used of the young child Jesus in Matthew 2:11.

The Lord used this same word for child when He referred to the little girl He raised from the dead in Mark 5:35-43; the child was twelve years old. Those who receive a little child in Jesus’ name receive Him, there can be no greater blessing.

“But whoever causes one of these little ones who believe in Me to sin, it would be better for him if a millstone were hung around his neck, and he were drowned in the depth of the sea.” Matthew 18:6.

The key phrase here is, “these little ones who believe in Me”, children are innocent and will believe in God if you teach them, so in a sense they believe in Jesus as He states above.

Children are covered by the shed blood of Christ until they reach an age when they can willfully reject Him. This is confirmed by the following statement of John the Baptist.

“The next day John saw Jesus coming toward him, and said, ‘Behold! The Lamb of God who takes away the sin of the world!’” John 1:29.

If you take the above statement and couple it with the Book of Life as mentioned in Exodus and Revelation it should all become clear to you.

“Then Moses returned to the Lord and said, ‘Oh, these people have sinned a great sin, and have made for themselves a god of gold! Yet now, if You will forgive their sin – but if not, I pray, blot me out of Your book which You have written.’ And the Lord said to Moses, ‘Whoever has sinned against Me, I will blot him out of My book.’” Exodus 32:31-33.

“And anyone not found written in the Book of Life was cast into the lake of fire.” Revelation 20:15.

The Book of Life was written before time began and it has the name of every soul conceived, including yours and mine; and the blood of the Lamb of God has taken away the sin of everyone named in the book.

Every person who rejects God and Christ as his savior for the last time is erased from that book and the payment for their sin reverts back to the sinner.

The unborn, infants, toddlers and children are far too naïve to make such an important decision, as a result their names are retained in the book upon their death.