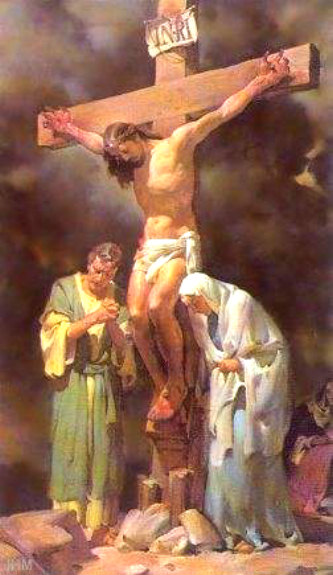 “And whoever receives one little child like this in My name receives Me. But whoever causes one of these little ones who believe in Me to sin, it would be better for him if a millstone were hung around his neck, and he were drowned in the depth of the sea.” Matthew 18:5-6.

Woe to those who cause these little ones to sin, and there are those who do so with great glee.

The atheist who raises his child to hate God, the pedophile who murders children’s souls, godless academia who teach children a philosophy of despair; song writers and movie producers who glorify immorality, violence and godlessness. You are being fitted for a millstone.

Mothers and fathers who manipulate their children to hate the other parent; fathers it is understandable that the acrimony of divorce has made you bitter at your wife, but your children are innocent of any wrongdoing between the spouses.

Yet, Satan will always make sure that the child will feel responsible for the divorce.

As for the millstone, many wonder if this is an upper millstone or a lower one, perhaps to gauge the weight or size of it; the real issue though is it is a millstone!

Hung about the neck, that means that the malefactor sinks head first, so instead of looking up at blue water, they face down toward the frigid inky black depths. And the terrifying question arises, “Will I drown or be crushed in the dark abyss?”

Is Jesus an alarmist? Actually, no, He says here that “it would be better for him if a millstone were hung around his neck”, better for him, if this is the better, what is the worst?

Just how bad can hell and the lake of fire be? What would it be worth to someone to avoid it?

In the first two sentences above the Lord shows that He is practical enough to know that the world is going to do what it wants in spite of the consequences.

Even so, He does not discount the costs. It does not matter if everyone is doing it; hell fire still awaits them. Jesus points out what it would be worth to avoid this awful fate, cut off your hand or leg, put out your eye, whatever is making you sin rid yourself of it.

The meaning is, whatever it is that is keeping you from accepting Christ as your savior cast it off, it is not worth it, these are all just temporal things that will disappear in time.

People have made huge sacrifices for Christ; their social status, they have given up stardom, lost lucrative business positions and political appointments, gone from being society matrons to being considered common rabble.

Many are disowned and disinherited, parents may consider their Christian children dead, and many millions more are and were persecuted, robbed of their worldly goods, tortured, and murdered.

Is this any different than cutting your limbs off or blinding yourself, consider the cost and weigh it against an eternity in the lake of fire.

“Take heed that you do not despise one of these little ones, for I say to you that in heaven their angels always see the face of My Father who is in heaven.” Matthew 18:10.

Folks make the mistake of thinking that just because they do not see the recompense of the wicked that it does not happen, not so, not so at all.

It is not for us to see everything, but we can know this, God has angels watching the innocents. And if He has gone to such lengths to care for them, be assured that the punishment of the evil doer will overtake, terrify and devour him as surely as the sun will rise tomorrow.

“The face of the Lord is against those who do evil, to cut off the remembrance of them from the earth.” Psalm34:16.

“For the eyes of the Lord are on the righteous, and his ears are open to their prayers; but the face of the Lord is against those who do evil.” 1 Peter 3:12.

The power of this one statement should not be overlooked since it goes all the way back to the Garden of Eden. When Adam disobeyed God the curse came upon all mankind and all became lost, everyone, no exceptions.

“Of every tree of the garden you may freely eat; but of the tree of the knowledge of good and evil you shall not eat, for in the day that you eat of it you shall surely die.” Genesis 2:16b-17.

The death that God was speaking of here is spiritual death, eternal separation from God; and this death was passed down to all of Adam’s descendants, this includes children.

“Therefore as through one man’s offense judgment came to all men, resulting in condemnation, even so through one Man’s righteous act the free gift came to all men, resulting in justification of life. For as by one man’s disobedience many were made sinners, so also by one Man’s obedience many will be made righteous.” Romans 5:18-19.

To sum up the above, Christ’s sacrifice on the cross not only saves all who will accept Him as savior today, but the blood of Christ erased the curse of sin which was upon all the Old Testament saints who trusted in God, including infants and children.

This is the meaning of His statement, “For the Son of Man has come to save that which was lost.”

“What do you think? If a man has a hundred sheep, and one of them goes astray, does he not leave the ninety-nine and go to the mountains to seek the one that is straying? And if he should find it, assuredly, I say to you, he rejoices more over that sheep than over the ninety-nine that did not go astray. Even so it is not the will of your Father who is in heaven that one of these little ones should perish.” Matthew 18:12-14.

This lost sheep is one that has wandered from the fold, and it is the good shepherd that seeks him and brings him back to the fold.

“Even so it is not the will of your Father who is in heaven that one of these little ones should perish.” Matthew 18:14.

Jesus further illustrated His love for children and God’s acceptance of them as follows.

“Then little children were brought to Him that He might put His hands on them and pray, but the disciples rebuked them. But Jesus said, ‘Let the little children come to Me, and do not forbid them; for of such is the kingdom of heaven.’” Matthew 19:13-14.

The New American Standard Bible makes the Lord’s reply even stronger, “…Let the children alone, and do not hinder them from coming to Me; for the kingdom of heaven belongs to such as these.”

The kingdom of heaven belongs to these little ones.

Notice the attitude of the disciples, they rebuke them; this is the way mankind views children, they are not important, yet Christ says that the kingdom of heaven is made up of such and belongs to them.

For those who are grieving, it is impossible to say anything that will stop that instantly other than what my aunt said when my father died, “Time heals all wounds”.

I did not understand that then, but now 63 years later, I do. To those grieving for a child or children, Scripture is clear, they are with Jesus. Do not allow man made fables or so called theology that is not based on Scripture to embitter you or bring you to grief.

There is another important principle to consider here and that is the doctrine of eternal security.

Like the teachings of limbo and children being elected to go to hell, there are those who believe that after you accept Christ as your savior it is possible to lose your salvation.

This too is a false concept and such belief cheapens the shed blood of Jesus Christ, God’s Son.

A question, when Christ died for your sins, how many of them were in the future?

The answer is, all of them! If all of them were in the future, then which one will make you lose your salvation?

“For God so loved the world that He gave His only begotten Son, that whoever believes in Him should not perish but have everlasting life” John 3:16.

The phrase, “should not perish but have everlasting life” is present tense, whoever believes has everlasting life right now; not, they will get it if they keep the rules.

“For by one Spirit we were all baptized into one body – whether Jews or Greeks, whether slaves or free – and have all been made to drink into one Spirit.” 1 Corinthians 12:13.

Speaking of salvation in Christ Scripture says this.

“In Him you also trusted, after you heard the word of truth, the gospel of your salvation; in whom also, having believed, you were sealed with the Holy Spirit of promise, who is the guarantee of our inheritance until the redemption of the purchased possession, to the praise of His glory.” Ephesians 1:13-14.

There are many more examples of the eternal security of the believer in Scripture, if you still have doubts, please study your Bible, you will find them.

I bring up eternal security for all of those who are grieving for a sister, brother, parent, or best friend. Remember this, just because you do not know whether your loved one had accepted Christ before their death it does not automatically mean they are in hell.

You have not been with them every minute of their life, nor do you have any inkling of what they were thinking at the time of death; for this reason you have no idea of what their eternal destiny is.

As long as one is alive there is hope, and at some time a Sunday school teacher or childhood friend, even a stranger may have brought them the life giving message completely without your knowing.

Even an atheist or a cult member may have been saved as a child and you would never know.

Do not make the same mistake as those who teach that a child is in limbo, or those who think that they are in hell.

Do not consign anyone to hell without knowing all the facts!

Even the Christian son of atheist Madalyn Murray O’Hare hopes that in the moments before being murdered she accepted Christ as her Savior.

We cannot know for sure until we enter heaven ourselves. For this reason, do not reject Christ just because you think a loved one is in hell; you will be making a tragic mistake.

“In this the love of God was manifested toward us, that God has sent His only begotten Son into the world, that we might live through Him. In this is love, not that we loved God, but that He loved us and sent His Son to be the propitiation [complete payment] for our sins.” 1 John 4:9-10.