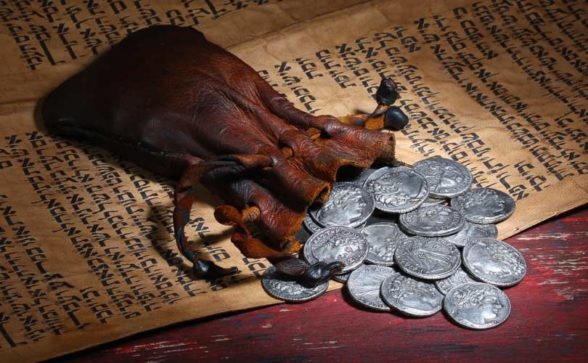 “Now as they heard these things, He [Jesus] spoke another parable, because He was near Jerusalem and because they thought the kingdom of God would appear immediately.” Luke 19:11.

Luke chapter 19 above begins with the salvation of a chief tax collector named Zacchaeus, and from verse 11 through 27 it contains the parable we will discuss here; after which it continues with Jesus’ triumphal entry into Jerusalem and ends with His driving out the money changers in the temple.

The followers of the Lord had all been taught that when Messiah would come, He would seat Himself as King of Israel and over all the nations of the earth.

There are Old Testament prophecies which indicate this, along with prophecies of a suffering Messiah. Men, however, prefer a hero to a sufferer and elected to teach the heroic Christ, which He is and will be upon His return.

“He was oppressed and He was afflicted, yet He opened not His mouth; He was led as a lamb to the slaughter, and as a sheep before its shearers is silent, so He opened not His mouth, He was taken from prison and from judgment, and who will declare His generation? For He was cut off from the land of the living; for the transgressions of My people He was stricken. And they made His grave with the wicked – but with the rich at His death, because He had done no violence, nor was any deceit in His mouth. Yet it pleased the Lord to bruise Him; He has put Him to grief. When You make His soul an offering for sin, He shall see His seed, He shall prolong His days, and the pleasure of the Lord shall prosper in His hand. He shall see the labor of His soul, and be satisfied. By His knowledge My righteous Servant shall justify many, for He shall bear their iniquities.” Isaiah 53:7-11.

The heroic Messiah was the mindset of the twelve disciples as well and was often reflected in their questions and comments.

This is also the main reason given in the opening verse for the following parable, though it teaches a great deal more.

“Therefore He said: ‘A certain nobleman went into a far country to receive for himself a kingdom and to return. So he called ten of his servants, delivered to them ten minas, and said to them, “Do business till I come.” But his citizens hated him, and sent a delegation after him, saying, “We will not have this man to reign over us.”’” Luke 19:12-14.

This parable is about Jesus, so the nobleman is He, the far country He travels to is heaven.

“But this Man, after He had offered one sacrifice for sins forever, sat down at the right hand of God, from that time waiting till His enemies are made His footstool. For by one offering He has perfected forever those who are being sanctified [set apart].” Hebrews 10:12-13.

Indeed, He has also already received a kingdom just as He reported to His disciples after His resurrection from the dead.

“When they saw Him, they worshiped Him; but some doubted [Thomas, John 20:24-29]. And Jesus came and spoke to them, saying, ‘All authority has been given to Me in heaven and on earth. Go therefore and make disciples of all the nations, baptizing them in the name of the Father and of the Son and of the Holy Spirit, teaching them to observe all things that I have commanded you; and lo, I am with you always, even to the end of the age.’ Amen”. Matthew 28:17-20.

Not only do we find that Jesus was to go to a far country; He said He would return sometime, which He had stated on numerous occasions.

“For the Lord Himself will descend from heaven with a shout, with the voice of an archangel, and with the trumpet of God. And the dead in Christ will rise first. Then we who are alive and remain shall be caught up together with them in the clouds to meet the Lord in the air. And thus we shall always be with the Lord. Therefore comfort one another with these words.” 1 Thessalonians 4:16-18.

When the nobleman left for his journey he entrusted certain of his servants with money to invest. According to one commentator, this was not an uncommon practice back then.

“So he called ten of his servants, delivered to them ten minas, and said to them, ‘Do business till I come.’” Luke 19:13.

Each of these ten servants received one mina, the equivalent of three months wages.

This parable should not be confused with the one in Matthew 25:13-30 wherein the master of the house gave the servants a number of talents.

Though it is difficult to determine what the weight of a talent is, we do know that it is a measurement of gold or silver which can be from 58 to 80 pounds, with some guesses of 120 pounds. Whatever the weight is it is thought to be a consistent even number, and a weight that an able bodied man can carry.

Whatever it may be, and no matter what age you live in, gold or silver has always been worth a great deal. Notice the fluctuation in just three years as seen below.

I give this information for those who might want to compare the two parables. One other difference between the two is the Matthew 25 parable is given in Jerusalem, and Luke 19 takes place about 18 miles away in Jericho.

Once he had entrusted the money to his servants he left on his journey, his citizens who hated him sent a delegation after him.

“But his citizens hated him, and sent a delegation after him, saying, ‘We will not have this man to reign over us.’” Luke 19:14.

This nobleman is Jesus and the citizens who sent the delegation are the men and women of His own nation, Israel.

While this is a parable, it is still about Jesus, and relates to future things for both His disciples at the time and to His followers today.

Remember this, parables do not have to stand on all fours like a table, rather some parts of a parable may not have anything to do with its interpretation, but have been added to flesh out its meaning.

“And so it was that when he returned, having received the kingdom, he then commanded these servants, to whom he had given the money, to be called to him, that he might know how much every man had gained by trading.” Luke 19:15.

The servants in this parable are Christians, not unbelievers. Christians will give an account of themselves before the judgment seat of Christ.

‘For none of us lives to himself, and no one dies to himself. For if we live, we live to the Lord; and if we die, we die to the Lord. Therefore, whether we live or die, we are the Lord’s. For to this end Christ died and rose and lived again, that He might be Lord of both the dead and the living. But why do you judge your brother? Or why do you show contempt for your brother? For we shall all stand before the judgment seat of Christ. For it is written: ‘As I live, says the Lord, every knee shall bow to Me, and every tongue shall confess to God.’ So then each of us shall give account of himself to God.” Romans 14:7-12.

However, those who have rejected Christ will stand before the great white throne at the end of time and have the charges against them read to them. The Christ rejecters will then be cast into the lake of fire which burns forever and forever, Revelation 20:10-15.

“And I saw the dead, small and great, standing before God. And books were opened. And another book was opened, which is the Book of Life. And the dead were judged according to their works, by the things which were written in the books. The sea gave up the dead who were in it, and Death and Hades delivered up the dead who were in them. And they were judged, each one according to his works. Then Death and Hades were cast into the lake of fire. This is the second death. And anyone not found written in the Book of Life was cast into the lake of fire.” Revelation 20:12-15.