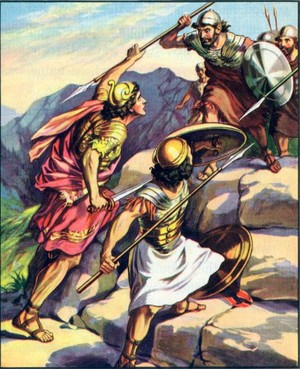 “Then Jonathan [King Saul’s son] said to the young man who bore his armor, ‘Come, let us go over to the garrison of these uncircumcised; it may be that the Lord will work for us. For nothing restrains the Lord from saving by many or by few.’ So his armorbearer said to him, ‘Do all that is in your heart. Go then; here I am with you, according to your heart.’ Then Jonathan said, ‘Very well, let us cross over to these men, and we will show ourselves to them.’” 1 Samuel 14:6-8.

“A meditation of David, which he sang to the Lord concerning the words of Cush, a Benjamite.” Psalm 7:1a.

These words are a preamble to Psalm 7 and not part of the psalm itself. The person known as Cush the Benjamite cannot be definitely identified. Some say it may be King Saul himself since his father’s name was Kish which may have been changed to Cush a name for his son Saul.

Charles Ryrie reckons Cush to be the name of an unknown henchman of King Saul who threatened David’s life during the period when Saul was pursuing David in an attempt to kill him. Whatever the case may be, it is apparent that the words in the opening verses indicate a serious threat to David’s life.

“O Lord My God, in You I put my trust; save me from all those who persecute me; and deliver me, lest they tear me like a lion, rending me in pieces, while there is none to deliver.” Psalm 7:1-2.

If you have read one or all of the four gospels (Matthew, Mark, Luke and John) you would certainly recognize that Jesus must have uttered this prayer often.

In the end though, when God gave Him over to ungodly men to be crucified for the sin of the world, being torn by a lion would have been more humane.

But David’s cry in this psalm is for us too, this is why the passages from 1 Samuel have been added to this post, to show that with God, all things are possible, not just for the super saints, but for all Christians.

“Jesus said to him, ‘If you can believe, all things are possible to him who believes.’” Mark 9:23.

“Now to Him who is able to do exceedingly abundantly above all that we ask or think, according to the power that works in us…” Ephesians 3:20.

Many of you are in distress of some sort or another, whether a marriage, problems at work, or the lack of work, some may even fear for your lives. These are things you can take to the Lord in prayer.

However, as this psalm will teach us, we must come to God with clean hands and a pure heart. Not perfection mind you, none of us is perfect.

Even though the Christian is seen as sinless in Christ, they still have to turn from sin in their lives and confess all known sin to God. It is then we can pray confidently.

“Where do wars and fights come from among you [Christians]? Do they not come from your desires for pleasure that war in your members? You lust and do not have. You murder [in your heart] and covet and cannot obtain. You fight and war. Yet you do not have because you do not ask. You ask and do not receive, because you ask amiss, that you may spend it on your pleasures. Adulterers and adulteresses [Christians who are unfaithful to God]! Do you not know that friendship with the world is enmity with God? Whoever therefore wants to be a friend of the world makes himself an enemy of God. Or do you think that the Scripture says in vain, ‘The Spirit who dwells in us yearns jealously’?” James 4:1-5.

David goes on now to confess his clear conscience of any wrongdoing, appealing to God who knows his heart and putting himself at God’s mercy.

“O Lord my God, if I have done this: If there is iniquity in my hands, if I have repaid evil to him who was at peace with me, or have plundered my enemy without cause, let the enemy pursue me and overtake me; yes, let him trample my life to the earth, and lay my honor in the dust. Selah.” Psalm 7:3-5.

The Lord Jesus could say the same things about Himself, as we can see from the glimpses of the heart of Christ in the garden of Gethsemane, and from the cross in Psalm 69.

“Save Me, O God! For the waters have come up to my neck. I sink in deep mire, where there is no standing; I have come into deep waters, where the floods overflow me. I am weary with my crying; my throat is dry; my eyes fail while I wait for my God. Those who hate me without a cause are more than the hairs of my head; they are mighty who would destroy me, being my enemies wrongfully; though I have stolen nothing, I still must restore it.” Psalm 69:1-4.

The last phrase, “…though I have stolen nothing, I still must restore it” is a reference to Jesus’ payment for sin even though He never sinned.

“For He made Him who knew no sin to be sin for us, that we might become the righteousness of God in Him.” 2 Corinthians 5:21.

“…if there is iniquity in my hands” Psalm 7:3b; David has this to say about confession and iniquity.

“Blessed is the man to whom the Lord does not impute iniquity, and in whose spirit there is no deceit. When I kept silent, my bones grew old through my groaning all the day long. For day and night Your hand was heavy upon me; my vitality was turned into the drought of summer. Selah. I acknowledged my sin to You, and my iniquity I have not hidden. I said, ‘I will confess my transgressions to the Lord,’ and You forgave the iniquity of my sin. Selah. For this cause everyone who is godly shall pray to You in a time when You may be found; surely in a flood of great waters they shall not come near him. You are my hiding place; You shall preserve me from trouble; You shall surround me with songs of deliverance. Selah.” Psalm 32:2-7.

Notice how unconfessed sin became a sickness to David; is it possible that some of the troubles that come upon us are just God trying to get us to confess the sins that we are trying to cover up?

“…if I have repaid evil to him who was at peace with me” Psalm 7:4a; this may be easier to do than one would suspect.

Have you ever known someone who was cut off on the freeway by another car and said, “He can’t do that to me!” and then they proceeded to cut that car off in retaliation, perhaps even with an obscene gesture?

What if the driver of the other car was innocent? Perhaps they swerved to avoid an accident, misjudged the other cars speed, did not see him, or just had a stupid moment that they instantly regretted. Only God knows the other drivers motivations.

Did the man who decided to retaliate, repay with evil to someone who was at peace with them? In cases like this Christians need to remember that vengeance belongs to the Lord and not to us. We sin when we judge another without all the facts.

“…or have plundered my enemy without cause” Psalm 7:4b, it seems like we should be able to plunder our enemies anytime we get the chance, before they do it to us, is this not so?

It was Saul’s intent to kill David, yet on two occasions David had the opportunity to kill him and did not do so, 1 Samuel chapters 24 and 26. David’s actions were actually in keeping with the Law of Moses.

“If you meet your enemy’s ox or his donkey going astray, you shall surely bring it back to him again. If you see the donkey of one who hates you lying under its burden, and you would refrain from helping it, you shall surely help him with it.” Exodus 23:4-5.

Just think, if someone sees their enemy’s animal straying, they are not to say in their heart, “Well, no one knows I’ve seen it; why should I help this fool?” God sees and He returns such evil upon their own head.

This is not just Old Testament law; Jesus rephrased it and tells us to do the same.

“You have heard that it was said, ‘You shall love your neighbor and hate your enemy.’ But I say to you, love your enemies, bless those who curse you, do good to those who hate you, and pray for those who spitefully use you and persecute you, that you may be sons of your Father in heaven; for He makes His sun rise on the evil and on the good, and sends rain on the just and on the unjust.” Matthew 5:43-45.

The Apostle Paul expands on this considerably in his letter to the Romans.

“Repay no one evil for evil. Have regard for good things in the sight of all men. If it is possible, as much as depends on you, live peaceably with all men. Beloved, do not avenge yourselves, but rather give place to wrath; for it is written, ‘Vengeance is Mine, I will repay,’ says the Lord. Therefore ‘If your enemy is hungry, feed him; if he is thirsty, give him a drink; for in so doing you will heap coals of fire on his head.’ Do not be overcome by evil, but overcome evil with good.” Romans 12:17-21.

David was so confident of his innocence of the sins that he had brought up in this psalm that he even called what would amount to a curse down upon himself.

“Let the enemy pursue me and overtake me; yes, let him trample my life to the earth, and lay my honor in the dust. Selah [pause, or consider carefully]” Psalm 7:5.

End of part one of Psalm 7, God My Trust.