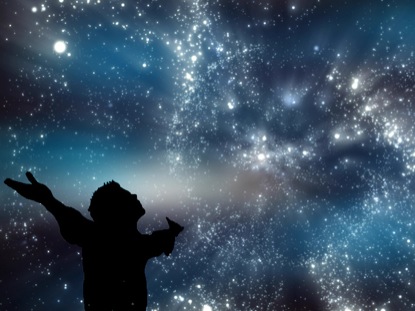 “O Lord, our Lord, how excellent is Your name in all the earth, who have set Your glory above the heavens! Out of the mouths of babes and nursing infants You have ordained strength, because of Your enemies, that You may silence the enemy and the avenger.” Psalm 8:1-2.

“When I consider Your heavens, the work of Your fingers, the moon and the stars, which You have ordained, what is man that You are mindful of him, and the son of man that You visit him?” Psalm 8:3-4.

Since this psalm was written by King David, one can only imagine the years he spent as a shepherd lying under the stars and looking up at the immensity of the heavens and wondering this very thing; what is man that You even think about him?

The word he uses for man here is enosh, meaning frail man, sickly man. Modern man does not think on these terms, but we are frail especially when we are faced with earthquakes, tsunamis, hurricanes, tornadoes, any such things as this which highlight our frailness.

Many of us have surely thought the same things while on a camping trip, or at a school camp.

Some think that when God created everything He just wound the clock and wandered off somewhere, perhaps to do another project.

When you consider the apparent randomness of life, this is an easy thing to do. However, God did not create us to hate or to ignore, but to love.

The fact is that God is dealing with individuals, each as though they were the only one on earth. And when you consider that He is dealing with about 7,500,000,000 (7.5 billion) souls on earth, all at once, it becomes easier to see how confusing it is for the casual onlooker.

The best way to see how un-random God’s dealings with the whole world are is to focus on what He has done in your own life, and the lives of your loved ones. If you look beyond this and perhaps a few of your friends the picture becomes too large to comprehend.

Give God the benefit of the doubt, rather than say that He is uninterested in our lives, say that He is working, in love, within your life and many different lives, in countless and diverse ways.

“How precious also are Your thoughts to me, O God! How great is the sum of them! If I should count them, they would be more in number than the sand; when I awake, I am still with You.” Psalm 139:17-18.

Humanists like to think that man is the measure of all things, yet they die of cancer, heart attacks, and auto accidents daily.

Still, they go on about not needing a crutch like God. God is not a crutch; He is life support for both the unbeliever and the Christian.

“For You have made him a little lower than the angels, and You have crowned him with glory and honor.” Psalm 8:5.

You will find some translations which render this first phrase as, “For You have made him a little lower than God”. The reason for this is that the Hebrew word Elohim can be translated as angels or God, depending on the context.

Another reason for this is that Psalm 8:4-6 is quoted in the book of Hebrews in the New Testament which is written in Greek; and the writer translates the word as angels in Hebrews 2:7 and 9.

“You made him a little lower than the angels; You crowned him with glory and honor, and set him over the works of Your hands.” Hebrews 2:7.

“But we see Jesus, who was made a little lower than the angels, for the suffering of death crowned with glory and honor, that He, by the grace of God, might taste death for everyone.” Hebrews 2:9.

Since this psalm is all about Jesus, we also see that this man who is made a little lower than the angels is Jesus the Messiah/Christ.

Think about this though, God has given us a status as a little lower than the angels; this raises us far out of the senseless muck of despair that the evolutionists have put us into.

It is not right that we are compared to something which evolved from space garbage that a UFO left behind after visiting earth, as some cynical theorists teach.

It is not right that we are said to be part of lower animals and brute beasts.

Nor is it right that we are supposedly descendants of monkeys and apes which God created to function as part of our earth’s ecosystem.

Man is an eternal being and animals are not, this is an unbridgeable chasm between the two.

Man was given stewardship of the earth and all that is in it, and he has failed miserably with his greed and callous abuse; destruction of the land, cruelty to one another, and to the animals.

“For You have made him a little lower than the angels, and You have crowned him with glory and honor. You have made him to have dominion over the works of Your hands; You have put all things under his feet, all sheep and oxen – even the beasts of the field, the birds of the air, and the fish of the sea that pass through the paths of the seas.” Psalm 8:5-8.

Though the average person may not realize this, these words are not allegorical or legend. God literally gave our first parents, Adam and Eve, dominion over everything listed above.

However all was lost in the Garden of Eden when they were led to sin by eating of the fruit of the tree of the knowledge of good and evil, see Genesis chapter 3.

“Then God said, ‘Let Us make man in Our image, according to Our likeness; let them have dominion over the fish of the sea, over the birds of the air, and over the cattle, over all the earth and over every creeping thing that creeps on the earth.’” Genesis 1:26.

“Then God blessed them, and God said to them, ‘Be fruitful and multiply; fill the earth and subdue it; have dominion over the fish of the sea, over the birds of the air, and over every living thing that moves on the earth.’” Genesis 1:28.

But, as we see today, all things are neither under man’s feet nor in subjection to him. But we see Jesus, as it is pointed out in the book of Hebrews.

In the first and second chapters of Hebrews God makes the point that Jesus Christ (who is God the Son) has a station far above angels, and that all things have been given into His hand.

We also see in these passages that angels will not be in charge of the earth during the millennium, Jesus Christ will. This is where we shall pick up the narrative.

“For He [God] has not put the world to come [millennial earth], of which we speak, in subjection to angels. But one testified in a certain place, saying: ‘What is man that You are mindful of him, or the son of man that You take care of him? You have made him a little lower than the angels; You have crowned him with glory and honor, and set him over the works of Your hands. You have put all things in subjection under his feet.’ For in that He put all in subjection under him, He left nothing that is not put under him. But now we do not yet see all things put under him. But we see Jesus, who was made a little lower than the angels, for the suffering of death crowned with glory and honor, that He, by the grace of God, might taste death for everyone.” Hebrews 2:5-9.

“And [Jesus, God the Son] being found in appearance as a man, He humbled Himself and became obedient to the point of death, even the death of the cross.” Philippians 2:8.

It was at the cross that Christ made atonement for all of the sins of mankind, and anyone who wants their sins which separate them from God wiped out has only to reach out to Christ and ask and it will be given to them.

It was also at the cross that Christ took back from Satan what mankind lost to him in the Garden of Eden. Jesus has the power to take what He wants because it belongs to Him as Creator, instead He has taken back what was given to Adam and Eve legally at the cross, and by beating the devil at his own game in the temptation in the wilderness [Matthew 4:1-11]; vindicating God before angels and mankind.

Psalm 8 very appropriately ends with the same words it started with and adds an exclamation mark.

We have in these last three psalms, 6-8, seen a progression which links them together in the following manner.

Psalm 6, posted on 7-15-20 shows us the anguish of David as he considers the evil around him and the sinfulness of his own actions. But when David confesses his sins to God he finds that fellowship with God is restored and his enemies are turned back.

Psalm 7, posted on 7-18-20 and 7-21-20 David faces the terrors of sinful men who seek to destroy him and shows that by walking with God and turning away from all known sin, he is able to call upon the Lord and trust in Him to rescue him.

Psalm 8 posted on 7-25-20 and on 7-28-20 is all about the only sinless man, Christ Jesus, who, in spite of His sinless life and righteous prayers, suffers through and beyond all the terrors that David faced.

Jesus vindicated God before men and angels (both good and evil fallen ones); He took back the deed to the earth from Satan, and saved all who will call upon Him in truth from an eternity in the lake of fire.

And Jesus is coming back to rule this earth in righteousness, something that is utterly dead in this world today.