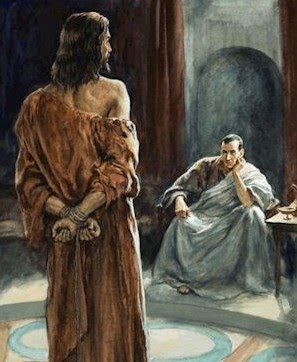 “Every way of a man is right in his own eyes, but the Lord weighs the hearts.” Proverbs 21:2.

Adam and Eve’s son Cain chose to come to God in his own way, while his brother Abel did the will of God.

“And in the process of time it came to pass that Cain brought an offering of the fruit of the ground to the Lord. Abel also brought of the firstlings of his flock and of their fat. And the Lord respected Abel and his offering, but He did not respect Cain and his offering. And Cain was very angry, and his countenance fell.” Genesis 4:3-5.

So when Cain saw that God had accepted Abel’s offering of a sacrifice from the flock, and rejected his own offering of the fruit of the ground he became angry.

That is when God Himself preached the very first sermon ever given, and that to a man He knew would reject it.

“So the Lord said to Cain, ‘Why are you angry? And why has your countenance fallen? If you do well, will you not be accepted? And if you do not do well, sin lies at the door. And its desire is for you, but you should rule over it.’” Genesis 4:6-7.

The result of this sermon preached by God did nothing to change Cain’s heart and he went out and murdered his brother.

“Then the Lord said to Cain, ‘Where is Abel your brother?’ He said, ‘I do not know. Am I my brother’s keeper?’ And He said, ‘What have you done? The voice of your brother’s blood cries out to Me from the ground. So now you are cursed from the earth, which has opened its mouth to receive your brother’s blood from your hand. When you till the ground, it shall no longer yield its strength to you. A fugitive and a vagabond you shall be on the earth.’ And Cain said to the Lord, ‘My punishment is greater than I can bear!’” Genesis 4:9-13.

Cain’s choice was to do things in his own selfish way. As a result, Cain has been sitting in hell for about 6,000 years awaiting Judgment Day. Cain will wait at least another thousand years before he is cast into the lake of fire.

The Pharaoh of the exodus of Moses’ day refused repeatedly to grant the Israelites permission to go into the wilderness to sacrifice to God.

The Egyptians endured ten of the most horrendous plagues to happen from then, to this the present day.

It was the tenth one which was the death of the firstborn of every Egyptian family, when they were released.

Even then Pharaoh and his army pursued them to the Red Sea. Did Pharaoh make a choice? Did he know that he was dealing with the God of all creation, or was this just another god of which there were many?

The third plague brought upon the Egyptians was that of lice on man and beast. Pharaoh’s magicians were doing pretty good duplicating some of the works of Moses by sorcery, but they could not produce the lice.

“Now the magicians so worked with their enchantments to bring forth lice, but they could not. So there were lice on man and beast. Then the magicians said to Pharaoh, ‘This is the finger of God.’ But Pharaoh’s heart grew hard, and he did not heed them, just as the Lord had said.” Exodus 8:18-19.

The magicians differentiated between gods and the God of creation when they spoke to Pharaoh about the source of these plagues.

He knowingly chose to defy and blaspheme the God of all creation.

It was Pharaoh’s choice to reject God back around 1440 B.C. and he has been writhing in hell for about 3,400 years now.

The Pharisees were quite correct to question Jesus’ credentials when He presented Himself as their Messiah. But after He gave overwhelming evidence that He was indeed the Messiah they had a choice.

“But although He had done so many signs [attesting miracles] before them, they did not believe in Him…” John 12:37.

“Then one was brought to Him who was demon-possessed, blind and mute; and He healed him, so that the blind and mute man both spoke and saw. And all the multitudes were amazed and said, ‘Could this be the Son of David [Messiah]?’ Now when the Pharisees heard it they said, ‘This fellow does not cast out demons except by Beelzebub, the ruler of the demons.’” Matthew 12:22-24.

It was bad enough that the Pharisees misled the folks who were beginning to believe in Christ, but to equate Jesus the Creator with the ruler of the demons was disgraceful. Yet they were not done sinking in their own filth.

When Jesus had raised Lazarus, a man who had been dead four days, some of the witnesses to this marvel went and told the Pharisees.

“Then the chief priests and the Pharisees gathered a council and said, ‘What shall we do? For this Man works many signs. If we let Him alone like this, everyone will believe in Him, and the Romans will come and take away both our place and nation.’” John 11:47-48.

The Pharisees made a choice, in spite of tremendous evidence that Jesus was the promised Messiah who conformed to numerous Old Testament prophecies. The Pharisees, chief priests, and many civic leaders have been in misery in hell for about 2,000 years now.

The communist and the atheist have a choice every morning they wake up.

“The heavens declare the glory of God; and the firmament shows His handiwork. Day unto day utters speech, and night unto night reveals knowledge. There is no speech nor language where their voice is not heard. Their line has gone out through all the earth, and their words to the end of the world. In them He has set a tabernacle for the sun, which is like a bridegroom coming out of his chamber, and rejoices like a strong man to run its race. Its rising is from one end of heaven, and its circuit to the other end; and there is nothing hidden from its heat.” Psalm 19:1-6.

“The fool has said in his heart, ‘There is no God.’ They are corrupt, they have done abominable works, there is none who does good.” Psalm 14:1.

The evolutionist has a choice, but they are willfully blind.

“For the wrath of God is revealed from heaven against all ungodliness and unrighteousness of men, who suppress the truth in unrighteousness, because what may be known of God is manifest in them, for God has shown it to them. For since the creation of the world His invisible attributes are clearly seen, being understood by the things that are made, even His eternal power and Godhead, so that they are without excuse, because, although they knew God, they did not glorify Him as God, nor were thankful, but became futile in their thoughts, and their foolish hearts were darkened. Professing to be wise, they became fools…” Romans 1:18-22.

The rich and the greedy who crave more even to the point of oppressing the poor have a choice because death overtakes all men.

“Do not be afraid when one becomes rich, when the glory of his house is increased; for when he dies he shall carry nothing away; his glory shall not descend after him. Though while he lives he blesses himself (for men will praise you when you do well for yourself), he shall go to the generation of his fathers; they shall never see light. A man who is in honor, yet does not understand, is like the beasts that perish.” Psalm 49:16-20.

The earth dweller who has settled down and identified with the world’s commerce, religious system, and meaningless amusements has a choice because they know there is an end of life on earth.

“As for man, his days are like grass; as a flower of the field, so he flourishes. For the wind passes over it, and it is gone, and its place remembers it no more.” Psalm 103:15-16.

Heaven is a choice, not a door prize; choose life.

“Most assuredly, I say to you, he who believes in Me has everlasting life.” John 6:47.