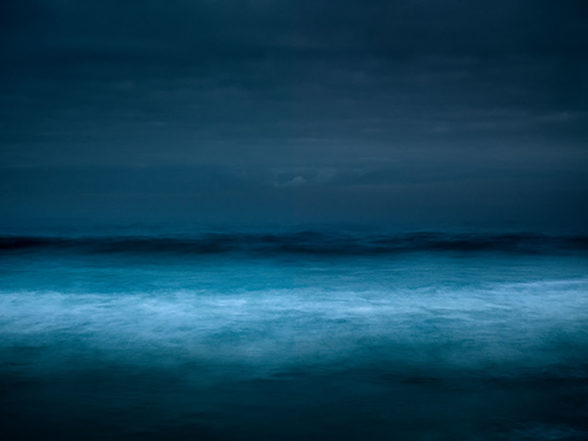 This is one of the more difficult passages in Scripture. The words “firmament in the midst of the waters” makes absolutely no sense to anyone who picks up a Bible for the first time and tries to read it.

Before we are done, we are going to at least have a good understanding of these verses.

If you will recall, we started out in a scary place, sitting in a small boat bobbing around in an almost suffocating, pitch black, impenetrable fog, when the words, “Let there be light” dispelled the darkness and a faint warm light filtered through the fog.

We are still in that boat my friends, but just remain seated and watch what God does next.

Thus far we have an idea of what the waters above and the waters below mean – the earth had been judged, and the chaos that remained was a world completely submerged in water and in place of atmosphere there was a fog so dense that light could not penetrate it. Yet now there is a faint glow and we are about to experience the second day of God’s re-creation.

“Let there be a firmament in the midst of the waters”, what is a firmament? Firmament comes from a word meaning to “beat out and to spread out”, that is no help, it may describe an action but it does not convey what happened very well.

The word itself has the idea of a vault or hemisphere supporting the clouds above. J. Vernon McGee simplifies it this way, the word firmament means “air spaces”, what we call atmosphere.

Let us see how this plays out. You are still seated in your little boat, relieved that at least that you can see light all around you. Now something else starts to happen, the entire fog begins to lift straight up all around you. Slowly at first, then faster as it moves higher, it begins to recede into the heaven above.

Five feet at first, then fifty, then a thousand, and then thousands of feet; you begin to look around now and there is nothing but open sea and absolutely clear skies as far as the eye can see. It really does not matter how far you can see, there is no land.

Does this lifting sound like firmament which means, to spread out, to beat out?

Breathe in, the air is as pure as anything you might have imagined (the oxygen content was actually greater before the flood) and better than anything we experience anywhere today.

Look down into the clear blue water; are you thirsty, dip your glass in and drink the best water you have ever tasted, no heavy metals, chemicals, and not so much as an amoeba.

There is nothing living in this water, go for a swim, the only danger to you is that you could drown, there are no sharks, giant squid, or any other monsters of the deep to swallow you up. It is best to stay in the boat though, for there is more to come.

“And God called the firmament Heaven. So the evening and the morning were the second day.” Genesis 1:8.

Many of you are aware that there are three places called heaven and the same Hebrew word may be used to describe them, but just as the English word heaven can mean one of three things, it all depends on the context of the sentence or statement.

“Our spaceship will soar into heaven to the moon.”

“See the beautiful birds as they soar through heaven.”

There are three heavens, the atmosphere where the birds fly, starry outer space where the astronauts go, and the third heaven where God is seated with Christ at His right hand. God created all of the heavens and everything in them.

“In the beginning God created the heavens and the earth.” Genesis 1:1.

“All things were made through Him [Jesus Christ], and without Him nothing was made that was made.” John 1:3.

As we have seen God created the atmospheric heaven to separate the waters from the waters, this is again referred to in Genesis 1:20.

“Then God said, ‘Let the waters abound with an abundance of living creatures, and let birds fly above the earth across the face of the firmament of the heavens.’” Genesis 1:20.

David wrote a beautiful Psalm which mentions the stars of heaven, outer space.

“When I consider Your heavens, the work of Your fingers, the moon and the stars, which You have ordained…” Psalm 8:3.

You will notice none of these things just happened; God is given credit for the creation of everything including the third heaven, the heaven of heavens.

“…he was caught up into Paradise and heard inexpressible words, which it is not lawful for a man to utter.” 2 Corinthians 12:4.

“Therefore know this day, and consider it in your heart, that the Lord Himself is God in heaven above and on the earth beneath; there is no other.” Deuteronomy 4:39.

Finally that the heaven spoken of in this instance is the atmospheric heaven above us and not part of the other two, Scripture narrows it down.

Now the waters which were below heaven covered the earth, and we will hear more about this on day three. The important thing here is that these waters will soon become the oceans that we are familiar with.

It is one reason folks tended to live longer, hundreds of years longer in fact, before the flood.

Let us take this canopy theory a bit further; remember, this is all speculation because all we have are the Scripture passages we have been studying here for our proof text, and while there are other hints given throughout the Bible, this is pretty much it.

Did you know that at a depth of 3280 feet the ocean is completely dark, no light penetrates that deep? How deep do you suppose the fog (if that is what it could be called) was that completely covered the earth?

Is it possible that the fog was so dense or so deep (deeper than 3280 feet?) that we might not have been able to survive in our little boat, either drowning or suffocating?

What we do know is that this water mass began to rise until it was perhaps thousands of feet into the air. As it did so it would have expanded outward like a balloon expands as air is blown into it. As it moved outward it would have shrunk from a thickness of a few thousand feet to perhaps hundreds.

Bear in mind that God had brought in a supernatural light to illuminate the world as He made these changes, that is why those in the boat can see things so clearly now.

Whatever the case may be, Scripture has given us a basic framework to work from and for anyone who is still interested in what happened there are many good books on the subject.

No one has to just accept my views or anyone else’s if they have reservations.

“Your mercy, O Lord, is in the heavens, and Your faithfulness reaches to the clouds. Your righteousness is like the great mountains; Your judgments are a great deep; O Lord, You preserve man and beast. How precious is Your lovingkindness, O God! Therefore the children of men put their trust under the shadow of Your wings. They are abundantly satisfied with the fullness of Your house, and You give them drink from the river of Your pleasures. For with You is the fountain of life; in Your light we see light.” Psalm 36:5-9.