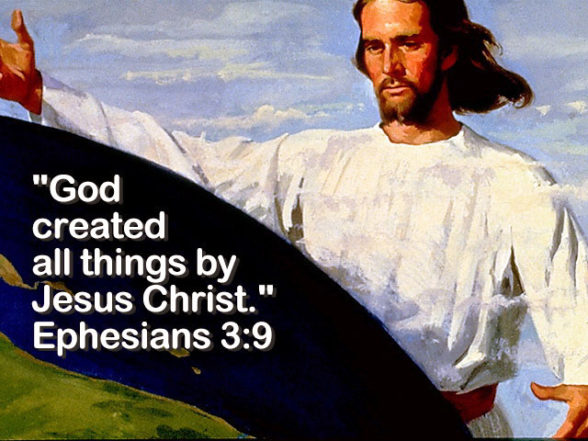 The term rendered “Word” above is translated from the Greek, Logos, which means word.

The use of the word Logos was best explained by H. A. Ironside in his book “Addresses on the Gospel of John”, Loizeaux Brothers Inc. publishers.

He wrote that the writings of the philosopher Plato were well circulated in John’s time, so it was common knowledge that Plato, speaking of life’s many mysteries had hoped a “Word” a Logos from God would come down and answer these questions.

God’s response to this was to send us Jesus Christ the Word, the answer to Plato’s, and our questions. It says of Jesus.

“For in Him dwells all the fullness of the Godhead bodily; and you are complete in Him, who is the head of all principality and power.” Colossians 2:9-10.

Just as our parents were there in the beginning before we were conceived, it is obvious that they were there before our beginning. And so Christ was eternally with God before the birth of creation.

But there is more, not only was Christ (the Word) there before the beginning, with God, it says, “…the Word was God”. This is an extremely important point; everything hangs on the deity of Christ.

If Christ is not God then He could not be the perfect sacrifice for sin, if this be so, then we are still hell-bound sinners.

Christians can relax, He is God, and Scripture makes this quite plain both here and in the rest of the Bible.

Satan though, will not cease attacking Christ’s deity, despite the Bible’s clear teaching; he still has his cults and liberal theologians clucking over us and saying, “You poor dear children, you just do not understand the nuances of Scripture, but we can help you.”

“But you, beloved, remember the words which were spoken before by the apostles of our Lord Jesus Christ: how they told you that there would be mockers in the last time who would walk according to their own ungodly lusts. These are sensual persons, who cause divisions, not having the Spirit.” Jude 17-19.

But the word of God is true.

“…Indeed, let God be true but every man a liar. As it is written: ‘That You [God] may be justified in Your [God] words, and may overcome when You [God] are judged.’” Romans 3:4b.

Satan has even corrupted Scripture. The Jehovah’s Witnesses’, “New World Translation of the Bible”, which untrained men have perverted to fit their theology; has twisted John 1:1, by adding an “a” to that verse. “In the beginning was the word, and the word was with God, and the word was a god.”

Do not overlook such things, it is often the small lies that drag the unsuspecting off to hell.

“God, who at various times and in different ways spoke in time past to the fathers by the prophets, has in these last days spoken to us by His Son, whom He has appointed heir of all things, through whom also He made the worlds; who being the brightness of His glory and the express image of His person, and upholding all things by the word of His power, when He had by Himself purged our sins, sat down at the right hand of the Majesty on high…” Hebrews 1:1-3.

In this we have Christ as Savior, His deity, His revelation of God the Father as the Word, and His portrayal as Creator of all things.

“All things were made through Him, and without Him nothing was made that was made.” John 1:3.

Christ who is co-equal with God the Father and God the Holy Spirit, took part in the creation of everything, “…without Him nothing was made that was made.”

We see this in the book of Genesis, where, as H. A. Ironside said, the Father planned, the Word spoke, and the Spirit executed the counsel of the Godhead.

“In the beginning God created the heavens and the earth. The earth was without form, and void; and darkness was on the face of the deep. And the Spirit of God was hovering over the face of the waters. Then God said, ‘Let there be light’; and there was light.” Genesis 1:1-3.

Here we have God, Elohim, the name of the creator God, which is also plural, allowing for the entire trinity. The Spirit of God hovered over the waters, and the Word spoke, “Let there be light”.

“To me, who am less than the least of all the saints, this grace was given, that I should preach among the Gentiles the unsearchable riches of Christ, and to make all people see what is the fellowship of the mystery, which from the beginning of the ages has been hidden in God who created all things through Jesus Christ…” Ephesians 3:8-9.

This meshes with John 1:3, which tells us that, “All things were made through Him…” and then expands that statement with, “…without Him nothing was made that was made.” This is pretty exclusive, if Christ were a created being, it would be pretty hard to create everything that was created and be created Himself.

In fact the New American Standard Version puts it this way, “And He is before all things, and in Him all things hold together…” Colossians 1:17.

Science tells us that all things are made up of atoms, which are the smallest particle, and these are made up of even smaller particles, verifying Paul’s statement:

Atoms consist of a nucleus made of protons which are positively charged and neutrons which have no charge; around this center the negatively charged electrons whirl around at tremendous speed.

Visually, this would resemble a diagram of our solar system with the sun in the center. Looking again at the nucleus, we find a curiosity, if like charges repel each other, and the nucleus has only positive protons and an equal number of neutrons which have no charge, what keeps the nucleus from exploding? The answer is in Colossians 1:17 above, “…in Him all things hold together”.

If Christ holds the very fabric of creation together, the power of Jesus Christ becomes all the more astounding when we consider that as Jesus was dining with friends, speaking to the multitudes, or even nailed to the cross and yielding up His spirit there, He was holding all things together by His power.

“For since the creation of the world His invisible attributes are clearly seen, being understood by the things that are made, even His eternal power and Godhead, so that they are without excuse, because, although they knew God, they did not glorify Him as God, nor were thankful, but became futile in their thoughts, and their foolish hearts were darkened. Professing to be wise, they became fools…” Romans 1:20-22.

In the Beginning taken from godisrevealed.com updated on 5-17-17