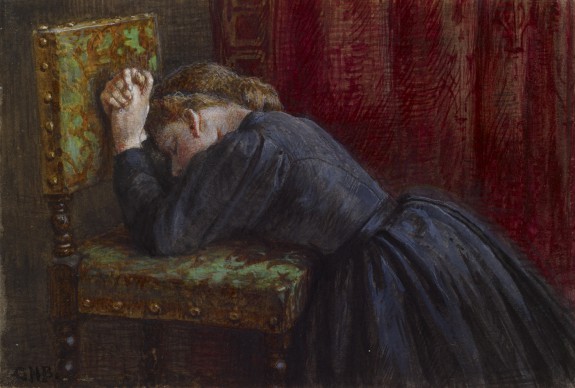 “Continue earnestly in prayer, being vigilant in it with thanksgiving…” Colossians 4:2.

It is interesting to note that the word “earnestly” is left out of the old King James Version, which is the version that you may have before you right now, here is how it reads.

“Continue in prayer, and watch in the same with thanksgiving…” Colossians 4:2.

There is absolutely nothing wrong with this translation. The advantage of the first quote from the New King James Version is that it expands the meaning of the verse to better comprehend the force of it.

According to Vine’s Expository Dictionary and Thayer’s Lexicon (I do not know Greek); the word “continue” comes from the word proskartereo that according to Vine’s has two definitions which are, pros, meaning towards and kartereo, meaning to be strong. Together the definition (in context) is to give constant attention to, to be steadfast, to endure, persevere, hence, “continue earnestly”.

And Vine’s adds, “Continuing in prayer with others” as the meaning, which underscores the need of corporate prayer. However, in my opinion, we should not restrict it to just this meaning because this sort of prayer should be continually in use by the individual.

So without minimizing the need for prayer meetings in every church every week or less, this verse will be taken to mean individual prayer, you and I, whenever we pray.

“Continue earnestly in prayer, being vigilant in it…” Colossians 4:2.

Returning to our resources, the word “vigilant” means to be watchful in; to employ meticulous care in a matter.

In other words vigilant prayer is prayer that is made carefully while wide awake. It is true that prayer can be defined as talking to God; yet at the same time consideration should be given as to what is being requested and to whom we are speaking.

“You ask and do not receive, because you ask amiss, that you may spend it on your pleasures.” James 4:3.

Many of us ask amiss or do not receive because we have not made a clean break with the world’s system. The following strong words reflect God’s position on worldliness.

“Therefore submit to God. Resist the devil and he will flee from you. Draw near to God and He will draw near to you. Cleanse your hands, you sinners; and purify your hearts, you double-minded. Lament and mourn and weep! Let your laughter be turned to mourning and your joy to gloom. Humble yourselves in the sight of the Lord, and He will lift you up.” James 4:7-10.

Cleanse your hands both by turning from known sin and by confessing your sins to God.

A double-minded man is someone who waffles between the things of this world and living in a godly manner. A choice must be made if anyone wants to have a successful prayer life; and really, to have a peaceful Christian life here on earth.

A good example of this is, if a person wants to, they can hang around a sports bar, drinking and betting with someone they meet there. Soon enough they begin to really like this person and care for their eternal destiny. How will they tell them about Christ?

For that matter if they have a wife and children, they are robbing them by not being with them in their spare time. What will their family think when he speaks of Jesus to them?

Then suddenly the worldly Christian’s house of cards comes tumbling down. This is why friendship with the world is enmity with God; because the world system is at enmity with Him.

“Lament and mourn and weep! Let your laughter be turned to mourning…” James 4:9a.

Laughter is a good thing in its proper setting but this is a reference to frivolous laughter over crude humor or the world’s ideas about entertainment.

We are not told to be dour prune faces here but filthy jokes and amusement at the misfortunes of someone else are certainly no laughing matter.

The more a person turns away from the world’s ways, the more success they will have in their prayer requests.

All Christians are called saints; not just those who have been elevated by the Catholic Church. All saints are not goody two shoes; we are all a work in progress which will take time, usually a lifetime.

We are also told to be vigilant in our prayer life; to bring our requests thoughtfully to Him expecting an answer, which just may not happen right away, in which case, keep asking until He tells you no or answers it.

H.A. Ironside once said that the reason we have prayer is to know that we are dealing with a living God who hears and answers us. If this is so, then we can expect prayer to be answered; but they never will be if they are never made.

I might add, if you find that you are a backslidden Christian or just not a very good one, ask anyway!

“Ask, and it will be given to you; seek and you will find; knock, and it will be opened to you. For everyone who asks receives, and he who seeks finds, and to him who knocks it will be opened. Or what man is there among you who, if his son asks for bread, will give him a stone? Or if he asks for a fish, will he give him a serpent? If you then, being evil, know how to give good gifts to your children, how much more will your Father who is in heaven give good things to those who ask Him!” Matthew 7:7-11.

Ask persistently, seek diligently, knock repeatedly; God wants to build persistence, diligence, and steadfast endurance into our lives. He is not deaf; He wants us to be strong men and women, adults.

Life does not consist of dropping out into a world that we wish existed, whether alcohol, drugs, or some other form of mind numbing amusement.

There are folks out there who escape the reality of this world by amassing power and riches to themselves, and in gaining control; they are gratified in a parasitic way by sucking the life out of their victims.

This is called the sin nature and is the reason for murders, thefts, tribal conflicts, slavery, global wars, Nazism, communism, socialism, liberalism, and all of the assorted dictators in the world today. Often the only thing that keeps them from reaching their goal is persistent, diligent, steadfast Christians.

Give constant attention to steadfast, enduring, vigilant prayer, and it should be added, as it is in other places, unceasing prayer.

“But the end of all things is at hand; therefore be serious and watchful in your prayers.” 1 Peter 4:7.

“…being vigilant in it with thanksgiving…” Colossians 4:2b.

Like any parent, God appreciates a thankful heart, in fact the words thanks, thankful, etc. is used six times in this letter. If you appreciate it when someone thanks you for something, realize that God feels the same way. And His blessings are constantly lavished upon you.

No matter what your circumstances are right now, think of something to be thankful for, no matter how pitifully small. In time you will begin to realize that you are indeed being blessed almost continually.

“…meanwhile praying also for us, that God would open to us a door for the word, to speak the mystery [hidden truth] of Christ, for which I am also in chains, that I may make it manifest, as I ought to speak.” Colossians 4:3-4.

One thing that it is easy to forget is that successful Christian evangelistic programs, whether, Billy Graham, Luis Palau, or Greg Laurie (put your favorite in here) all need constant prayer.

God is blessing them with success, why would they need constant prayer?

The answer to that is Satan, the adversary; he too is diligent, constantly undermining the work of God’s servants, creating conflicts, confusion, innuendo, and bringing continuous pressure from governments, and ungodly men who want to destroy them. This is truly serious warfare.

It is true that God could crush the opposition to His programs like so many cockroaches, but that is not how He works. God could carry out all of His plans by directly taking the gospel to every person on earth and allow them to choose or reject Him.

But, that is not how He has chosen to work. He created angels and gave them specific jobs. He created them with a free will, and unfortunately for many of them, they decided to follow the chief of liars Satan.

These fallen angels have gone from being God’s servants to being His tools for taking worthless pieces of metal and creating masterpieces of art.

He might simply have dumped all of these tools into the lake of fire created for them, but then the worthless pieces of metal would have remained the same, no longer worthless in Christ, but still just chunks of metal.

Without fire, the forge is useless.

In fact without adversity the world might be filled with even more self-centered, arrogant and unloving people who do not need Christ than it is today.

God has chosen to work through weak mankind, giving us the privilege of being a part of His plans.

“For it is the God who commanded light to shine out of darkness who has shone in our hearts to give the light of the knowledge of the glory of God in the face of Jesus Christ. But we have this treasure in earthen vessels, that the excellence of the power may be of God and not of us.” 2 Corinthians 4:6-7.

It is time to pick up our weapons of warfare, prayer and God’s word and face the enemy head on, without flinching without turning back. It is later than you think and the time of the end is drawing near.

“For though we walk in the flesh, we do not war according to the flesh. For the weapons of our warfare are not carnal but mighty in God for pulling down strongholds, casting down arguments and every high thing that exalts itself against the knowledge of God, bringing every thought into captivity to the obedience of Christ…” 2 Corinthians 10:3-5.

“Put on the whole armor of God, that you may be able to stand against the wiles of the devil. For we do not wrestle against flesh and blood, but against principalities, against powers, against the rulers of the darkness of this age, against spiritual hosts of wickedness in the heavenly places.” Ephesians 6:11-12.

When viewed in this manner, it is easy to see why the Apostle Paul would ask for prayer on his behalf. God wanted the Colossians to pray for, even this mighty man of God, and He wants us to pray for those the Holy Spirit brings to our own minds, as well as our families and ourselves.

You, yes, you have tremendous power in Christ, use it. Do not think, oh, I am a nobody in a nowhere place, doing a nothing job, you can be the most powerful man or woman on earth if you will just pick up your weapons and start praying with all diligence.