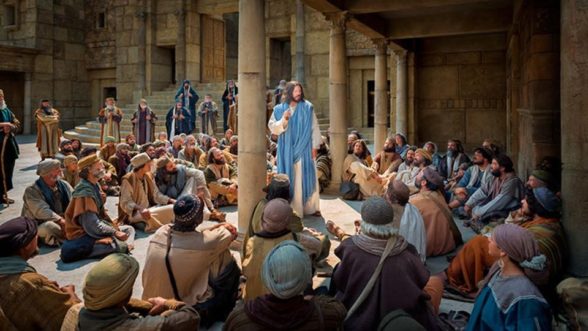 “Then some of them from Jerusalem said, ‘Is this not He whom they seek to kill? But look! He speaks boldly, and they say nothing to Him. Do the rulers know indeed that this is truly the Christ? However, we know where this Man is from; but when the Christ comes, no one knows where He is from.’” John 7:25-27.

As seen earlier in this chapter the folks who were from Jerusalem and those from the outlying regions had different opinions. In verse 20, those from out of town said to Jesus.

Whereas, those from Jerusalem acknowledged that the religious leaders were out to kill Him.

One thing they all seemed to agree upon is where Jesus was from. So sure were they that they did not bother to ask the Lord where He was born; having assumed that just because He was from Nazareth that was His birthplace.

In critical matters it is important to investigate carefully, assumptions made on what someone says at the water cooler, sound bites, rumors and innuendos, can adversely affect your life.

The note in my study Bible says that one of the popular beliefs about the Messiah was that He would be a mysterious person coming out of nowhere.

This may have been the thinking of some here. However, shortly thereafter, those from this group and perhaps others stated the following.

“Others said, ‘This is the Christ,’ but some said, ‘Will the Christ come out of Galilee? Has not the Scripture said that the Christ comes from the seed of David and from the town of Bethlehem, where David was?’ So there was a division among the people because of Him.” John 7:41-43.

Sorry to say, Jesus always causes division, nothing can be done about that. Again, it must be noted that Christians have never ever been commanded to persecute, condemn, or kill folks who reject Christ.

We do see a healthy aspect to this argument, Scripture seems to be being quoted, or at least consulted. Christ cannot be discussed outside of Scripture. There is a good reason for this; the Bible is the only definitive word on Jesus Christ.

“Every word of God is pure; He is a shield to those who put their trust in Him. Do not add to His words, lest He reprove you, and you be found a liar.” Proverbs 30:5.

While there are letters, and manuscripts, and archaeology to consult, they are nothing more than man’s research or his words; they may corroborate but they are not God’s words.

The same goes for anything that contradicts what is taught of Christ in Scripture.

“I marvel that you are turning away so soon from Him who called you in the grace of Christ, to a different gospel, which is not another; but there are some who trouble you and want to pervert the gospel of Christ. But even if we, or an angel from heaven, preach any other gospel to you than what we have preached to you, let him be accursed. As we have said before, so now I say again, if anyone preaches any other gospel to you than what you have received, let him be accursed.” Galatians 1:6-9.

Having gotten a little ahead of the narrative here, it is necessary to return to the original discussion.

Jesus, having done many attesting miracles, far more than mentioned in this gospel, feeding the 5000 and the 4000 by this time, and having made it plain that He is representing Himself as the Son of God; why would the question arise; no one knows where the Christ comes from?

The obvious answer would be; He is from God. Indeed, it is the intent of the Lord’s next statement to bring out this thought.

As far as the Lord’s having said where He was from, it was clear to the people of Jerusalem that He was claiming to be God. Below is part of the account of the healing at the pool of Bethesda.

“Therefore the Jews sought all the more to kill Him, because He not only broke the Sabbath, but also said that God was His Father, making Himself equal with God.” John 5:18.

And to those who were from outside Jerusalem, many of whom may have been present at the feeding of the 5000; His claims were as being from heaven.

People do not come down from heaven, our existence begins at conception. Only Christ the eternal preexistent one could claim not only to come from heaven, but that God is His Father and He has seen Him physically.

“No one has ascended to heaven but He who came down from heaven, that is, the Son of Man who is in heaven.” John 3:13.

“Who has ascended into heaven, or descended? Who has gathered the wind in His fists? Who has bound the waters in a garment? Who has established all the ends of the earth? What is His name, and what is His Son’s name, if you know?” Proverbs 30:4.

How do you judge a man’s character, is it not by weighing his words, his actions, and the testimony of those who know him? Jesus later throws down a challenge.

In another place He speaks of actions and deeds.

“…What comes out of a man, that defiles a man. For from within, out of the heart of men, proceed evil thoughts, adulteries, fornications, murders, thefts, covetousness, wickedness, deceit, licentiousness, an evil eye, blasphemy, pride, foolishness. All these evil things come from within and defile a man.” Mark 7:20-23.

“Do not judge according to appearance, but judge with righteous judgment.” John 7:24.

Within His reply to the Jews who could not figure out where the Christ would come from, Jesus makes a tragic statement.

The Jews not only did not recognize their own Messiah, they did not know their God.