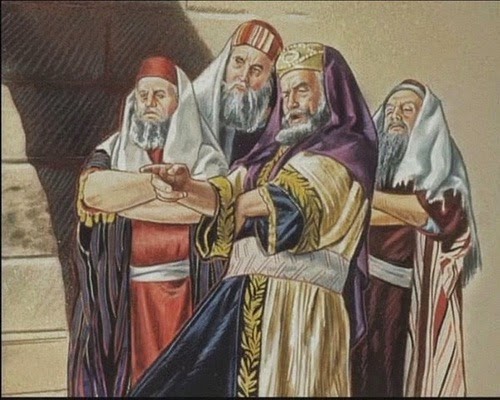 “Come now, you rich, weep and howl for your miseries that are coming upon you! Your riches are corrupted, and your garments are moth-eaten. Your gold and silver are corroded, and their corrosion will be a witness against you and will eat your flesh like fire. You have heaped up treasure in the last days.” James 5:1-3.

For a proper view of this passage and those to follow, a few things should be examined. Many expositors reckon that the reason for the rich to weep and howl for the miseries about to come upon them is that Jerusalem was to be sacked by Titus and the Roman legions in 70 A. D.

Indeed this did happen within about twenty years after the circulation of this epistle in 45 to 50 A.D. At which time the rich were plundered by both the Roman soldiers and opportunists within their own ranks.

However since this letter is addressed, “To the twelve tribes which are scattered abroad…” it is more likely that those being addressed are not just the rich who were alive at the time of the writing of this letter before 70 A.D. but for the greedy rich of all time.

The rich men referred to here are not the same ones as the rich mentioned in chapter one, for the Christian rich are not despicable as those described here.

Nor are they just the ungodly rich in the world, they are also the rich who profess to be Christians but they are not.

Their very actions show that they have no relationship with Christ at all.

“Beware of false prophets, who come to you in sheep’s clothing, but inwardly they are ravenous wolves. You will know them by their fruits. Do men gather grapes from thornbushes or figs from thistles?” Matthew 7:15-16.

This is true of the false prophet and it is true of false Christians.

The miseries that are coming upon them are either that of dying and finding themselves in hell, or it could be a reference to being cast into the lake of fire at the end of time.

The witness against them will be their very riches, which have rotted and the garments which have become moth-eaten. The indication is that these things were squirreled away and decayed from disuse, neither the rich man nor the needy had the benefit of these things, so great was this person’s stinginess.

The same may be said of their gold and silver which became corroded from being hidden rather than put to good use.

This miserliness will come back to haunt the rich in the lake of fire where their conscience will have been awakened to all their sins.

“Behold, these are the ungodly, who are always at ease; they increase in riches.” Psalm 73:12.

“Surely You set them in slippery places; You cast them down to destruction. Oh, how they are brought to desolation, as in a moment! They are utterly consumed with terrors. As a dream when one awakes, so, Lord, when You awake, You shall despise their image.” Psalm 73:18-20.

What a horrifying thought, the ungodly may be walking down the street, at a party, or in bed and suddenly they are, “…brought to desolation, as in a moment! They are utterly consumed with terrors. As a dream when one awakes…”

Death suddenly takes the ungodly and they awake in hell. The torment of hell becomes the eternal reality and life becomes a distant dream!

At the same time oddly enough God seems to awaken and He “despise[s] their image.” The time of God’s grace is past and having rejected His Son Jesus Christ as their Savior they now fall under the wrath of God.

“He who believes in the Son [Jesus Christ] has everlasting life; and he who does not believe the Son shall not see life, but the wrath of God abides on him.” John 3:36.

“Or do you despise the riches of His goodness, forbearance, and longsuffering, not knowing that the goodness of God leads you to repentance? But in accordance with your hardness and your impenitent heart you are treasuring up for yourself wrath in the day of wrath and revelation of the righteous judgment of God [judgment day], who ‘will render to each one according to his deeds’…” Romans 2:4-6.

“Indeed the wages of the laborers who mowed your fields, which you kept back by fraud, cry out; and the cries of the reapers have reached the ears of the Lord of Sabaoth [Hosts].” James 5:4.

This is the true wickedness, even though the rich man has hoarded more than enough silver and gold, he still withholds payment to those whose only income is by the sweat of their backs; even though these are the folks who have done much of the work to make him rich.

God does hear the cries of the oppressed and every sin is taken note of. This is something that the rich man will pay in full on judgment day and throughout eternity in the lake of fire.

“You have lived on the earth in pleasure and luxury; you have fattened your hearts as in a day of slaughter. You have condemned, you have murdered the just; he does not resist you. James 5:5-6.

This is a different kind of rich man, he is not a miser as described in verses 2 and 3, rather he lives a wanton, sumptuous life filled with every pleasure and living a life of constant feasting.

“There was a certain rich man who was clothed in purple and fine linen and fared sumptuously every day. But there was a certain beggar named Lazarus, full of sores, who was laid at his gate, desiring to be fed with the crumbs which fell from the rich man’s table. Moreover the dogs came and licked his sores. So it was that the beggar died, and was carried by the angels to Abraham’s bosom [paradise]. The rich man also died and was buried [and in hell]. Luke 16:19-22.

As with perhaps all rich men his desire is for more, and being self-centered, he has no problem seizing the property and goods of those unable to defend themselves.

It says, “…you have murdered the just”, this could be literally, as has happened often throughout the ages; money, especially if it is a large sum is enough to kill for.

Murdering the just can also be accomplished by dragging them into court and taking their livelihood away from them, while they are powerless to stop him.

“So [King] Ahab spoke to Naboth, saying, ‘Give me your vineyard, that I may have it for a vegetable garden, because it is near, next to my house; and for it I will give you a vineyard better than it. Or, if it seems good to you, I will give you its worth in money.’ And Naboth said to Ahab, ‘The Lord forbid that I should give the inheritance of my fathers to you!’” I Kings 21:2-3.

“And she [Jezebel, King Ahab’s wife] wrote in the letters, saying, ‘Proclaim a fast, and seat Naboth with high honor among the people; and seat two men, scoundrels, before him to bear witness against him, saying, “You have blasphemed God and the king.’ Then take him out, and stone him [with his family, II Kings 9:26], that he may die.’” I Kings 21:9-10.

And guess what, Ahab took possession of Naboth’s vineyard after murdering him and his family, see II Kings 9:21-26. There is more interesting information in I Kings 21. Please read it, it is just like reading a novel.

“Do not fret because of evildoers, nor be envious of the workers of iniquity. For they shall soon be cut down like the grass, and wither as the green herb.” Psalm 37:1-2.

“The name of the Lord is a strong tower; the righteous run to it and are safe. The rich man’s wealth is his strong city, and like a high wall in his own esteem.” Proverbs 18:10-11.

“For the eyes of the Lord run to and fro throughout the whole earth, to show Himself strong on behalf of those whose heart is loyal to Him.” II Chronicles 16:9a.