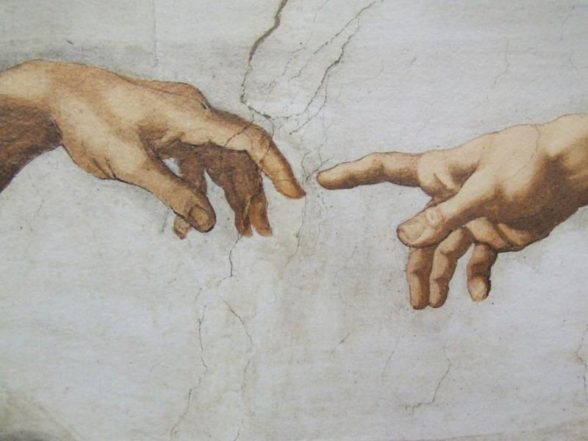 I think of a mirror with darkened glass, like those you might see in restaurants or some hotels. These darkly tinted mirrors are not so much meant to reflect you as they are to give a certain ambiance to the usually low lighted area where they are installed.

Ordinary mirrors today do give a good representation of the person looking into them, but the ancient mirrors were of polished metal and not very good in comparison to those of today.

It is God’s intent to look into our eyes and see Jesus and this is some of the reason for the mirror analogy. When a Christian looks into what can only be described as a dark mirror, they see Jesus, and Jesus is the exact representation of the Father.

“God, who at various times and in different ways spoke in time past to the fathers by the prophets, has in these last days spoken to us by His Son, whom He has appointed heir of all things, through whom also He made the worlds; who being the brightness of His glory and the express image of His person, and upholding all things by the word of His power, when He had by Himself purged our sins, sat down at the right hand of the Majesty on high…” Hebrews 1:1-3.

God has predestined the Christian to be conformed to the image of His son.

“For whom He foreknew, He also predestined to be conformed to the image of His Son, that He might be the firstborn among many brethren.” Romans 8:29.

Though we see Jesus in the most obscure manner as we gaze into the mirror, which is the Scriptures, we cannot see ourselves very clearly, only that which we reflect as our lives are changed by life and the word of God.

Our image, as seen by God, always begins with this.

“For He made Him who knew no sin to be sin for us, that we might become the righteousness of God in Him.” 2 Corinthians 5:21.

Even though we are seen as righteous in Christ Jesus that is not our outward state, so the process of conforming us to the meek and holy image of Christ goes on continually throughout our lives.

“And we know that all things work together for good to those who love God, to those who are the called according to His purpose.” Romans 8:28.

Strangely enough, the more we look into this dark mirror, God’s word, the more we are transformed into the image of the obscure reflection we see of Jesus.

The word dimly, or darkly in the King James Version, has the meaning of an enigma, or dark sayings. Which tells us that Scripture can only give us a dim view of who God is, what is true holiness, or even what heaven, angels, hell, or eternity are truly like.

“Beloved, now we are children of God; and it has not yet been revealed what we shall be, but we know that when He is revealed, we shall be like Him, for we shall see Him as He is. And everyone who has this hope in Him purifies himself, just as He is pure.” 1 John 3:2-3.

“But as it is written: ‘Eye has not seen, nor ear heard, nor have entered into the heart of man the things which God has prepared for those who love Him.’ But God has revealed them to us through His Spirit. For the Spirit searches all things, yes, the deep things of God. For what man knows the things of a man except the spirit of the man which is in him? Even so no one knows the things of God except the Spirit of God. Now we have received, not the spirit of the world, but the Spirit who is from God, that we might know the things that have been freely given to us by God.” 1 Corinthians 2:9-12.

Though we can see very little of the enormity of who God is, we can see a very great deal of the things we need to know in this life through God’s Holy Spirit. It is He who will reveal much to the trusting heart who wants to learn more of God.

In fact it has been said that the Bible does not tell us everything there is to know, but it tells us everything we need to know.

“But we all, with unveiled face, beholding as in a mirror the glory of the Lord, are being transformed into the same image from glory to glory, just as by the Spirit of the Lord.” 2 Corinthians 3:18.

The veil is a veil of blindness which is upon the children of Israel to this day (Exodus 34:27-35), but for the Christian the veil is taken away and we can see more clearly the glory of the Lord as we gaze into the Scriptures.

The interesting thing is that as we gaze into the Scriptures we are being transformed into the image of Christ through the actions of the Holy Spirit.

“For it is the God who commanded light to shine out of darkness who has shone in our hearts to give the light of the knowledge of the glory of God in the face of Jesus Christ.” 2 Corinthians 4:6.

God has shown us through His Son exactly who He is, as shown earlier in the quote from Hebrews 1:1-3. God gives the knowledge of who He is so we may become conformed to the same image.

This is not so we would become gods; rather it is so we will in all our ways exhibit the character of children of God, which we are in Christ.

“He was in the world, and the world was made through Him, and the world did not know Him. He came to His own, and His own did not receive Him. But as many as received Him, to them He gave the right to become children of God, even to those who believe in His name…” John 1:10-12.

It is for this reason we are urged to put on the new man which we actually are in Christ Jesus.

“…if indeed you have heard Him [Jesus] and have been taught by Him, as the truth is in Jesus: that you put off, concerning your former conduct, the old man which grows corrupt according to the deceitful lusts, and be renewed in the spirit of your mind, and that you put on the new man which was created according to God, in righteousness and true holiness.” Ephesians 4:21-24.

When we look into this dim mirror, this enigma, we can see only as we study diligently, the things that words can only describe inadequately.

“Now this I say, brethren, that flesh and blood cannot inherit the kingdom of God; nor does corruption inherit incorruption. Behold, I tell you a mystery: We shall not all sleep [die], but we shall all be changed – in a moment, in the twinkling of an eye, at the last trumpet. For the trumpet will sound, and the dead will be raised incorruptible, and we shall be changed. For this corruptible must put on incorruption, and this mortal must put on immortality. So when this corruptible has put on incorruption, and this mortal has put on immortality, then shall be brought to pass the saying that is written: ‘Death is swallowed up in victory.’” 1 Corinthians 15:50-54.

The Apostle John fell down as a dead man at the feet of the risen, glorified Christ when He appeared to him on the island of Patmos, see Revelation chapter one.

This is the same John who laid his head on the breast of Jesus during the Last Supper just before the arrest of the Lord (John 13:21-26).

The Apostle Paul was given a vision of the third heaven, which is where God resides, and the man who wrote most of the New Testament even with this little glimpse still came away amazed.

Two men stood on the edge of eternity and were changed forever by what they saw. They could only testify these things to us just as the Apostle Peter did when he recalled his experience on the mount of transfiguration (Matthew 17:1-13).

“For we did not follow cunningly devised fables when we made known to you the power and coming of our Lord Jesus Christ, but were eyewitnesses of His majesty. For He received from God the Father honor and glory when such a voice came to Him from the Excellent Glory: ‘This is My beloved Son, in whom I am well pleased.’ And we heard this voice which came from heaven when we were with Him on the holy mountain.” 2 Peter 1:16-18.

Soon all who have put their trust in Jesus will stand face to face with Him and with God the Father and the inexpressible will become known to us.

Any Christian knows far more than an unbeliever, but it is our job to learn as much as possible.

“Of all the afflictions that burden the human race, there is not one, whether spiritual or bodily, that cannot be healed by the Holy Scriptures.” John Chrysostom, 349-407.

“For if anyone is a hearer of the word and not a doer, he is like a man observing his natural face in a mirror; for he observes himself, goes away, and immediately forgets what kind of man he was. But he who looks into the perfect law of liberty and continues in it, and is not a forgetful hearer but a doer of the work, this one will be blessed in what he does.” James 1:23-24.

“Be diligent to present yourself approved to God, a worker who does not need to be ashamed, rightly dividing the word of truth.” 2 Timothy 2:15.

Or as the King James Version renders the above verse:

“Study to shew thyself approved unto God, a workman that needeth not to be ashamed, rightly dividing the word of truth.” 2 Timothy 2:15, KJV.

Christians are indeed workmen, workmen in God’s fields and the more we know of Him, the more successful we will be in the fields that God has given us. Nevertheless the right understanding of Scripture helps us too, not only in life but also in the life to come.

“For we are His workmanship, created in Christ Jesus for good works, which God prepared beforehand that we should walk in them.” Ephesians 2:10.

As 1 Corinthians 13:12b says, “Now I know in part…” but the things we know in part can be small or great. “…but then I shall know just as I also am known”, God’s greatness will suddenly become so immense that we will wonder that the whole universe can contain Him.

Hold on to these things no matter what, because they are true and the rewards are great.

“So we are always confident, knowing that while we are at home in the body we are absent from the Lord. For we walk by faith, not by sight. We are confident, yes, well pleased rather to be absent from the body and to be present with the Lord. Therefore we make it our aim, whether present or absent, to be well pleasing to Him.” 2 Corinthians 5:6-9.

“Finally then, brethren, we request and exhort you in the Lord Jesus that, as you received from us instruction as to how you ought to walk [conduct yourselves] and please God (just as you actually do walk), that you may excel still more.” 1 Thessalonians 4:1, NASB.

“Now to Him who is able to keep you from stumbling, and to present you faultless before the presence of His glory with exceeding joy, to God our Savior, who alone is wise, be glory and majesty, dominion and power, both now and forever. Amen.” Jude 24-25.