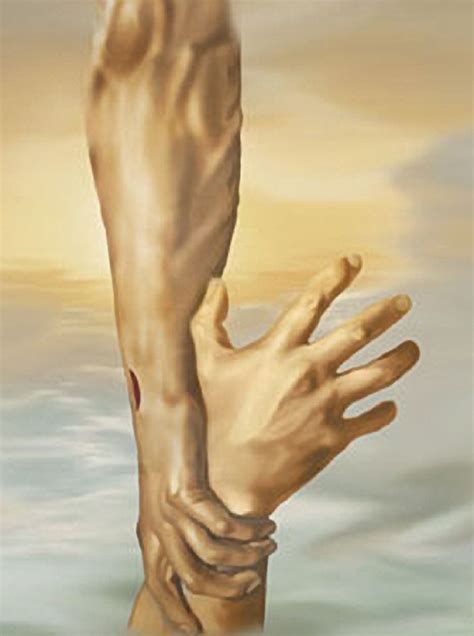 “In this the love of God was manifested [revealed] toward us, that God has sent His only begotten Son into the world, that we might live through Him. In this is love, not that we loved God, but that He loved us and sent His Son to be the propitiation for our sins.” 1 John 4:9-10.

It is important to look at the above verse and see it not as a jumble of sentimental words, but what it actually is, the word of God, and the only way to eternal life.

It is possible to read the Bible and not really read it, just as it is easy to listen to a sermon and not really hear what it says about God. When He spoke Jesus would often call out:

This inattention to detail is the cause of much confusion over the character of God, and just as confusion is the cause of wars and the separation of great friendships and marriages; it becomes important to hear, really hear, what is being said in all these areas.

Confusion about God is just as crippling or deadly as it is with wars and relationships. For the Christian such misconceptions can lead to a loss of many blessings.

You cannot know God’s will without a minimal understanding of Him. The following scenarios will clarify this thought.

The entirely false reasoning of the average person perceives God and His provision for salvation in this manner.

God created Adam and Eve and put them in the Garden of Eden so that they could live a happy life. They then reason that this was working out pretty well, until the Devil came along and got Adam and Eve to sin.

Once God ejected them from the garden, He realized that He would have to come up with a plan to save them. God then decided to have a Son and have him show people how to live a good life and get to heaven.

Once again, the Devil came along and destroyed God’s plan by having His Son Jesus crucified. So now men are left on their own to live by the rules that Jesus gave us during his short life, and if we are lucky, we will go to heaven.

As noted above this reasoning is entirely false, oddly enough though the thinking of many Christians is not too different from this.

Christian thought will go something like this. God has a perfect will and a permissive will. When He put Adam and Eve in the Garden of Eden, it was His perfect will that they enjoy His fellowship and live there forever.

This was thwarted by the Devil who caused them to sin and brought them under a curse. Fortunately, it was also God’s will that they should multiply and fill the earth. It then became necessary for God to send His Son into the world that He might die for sin.

There is a grain of truth in this line of thought, but it does not adequately demonstrate the omniscience of God nor does it show the entire monstrosity of sin.

There really was no chance of God’s perfect will being done in the garden, not if He wanted to allow us the use of our own free will.

To create humans under these circumstances would be like having a long slide that reaches from heaven to hell, and every child born would be put on that slide in heaven and they would just slip straight into hell.

We were created to glorify God, just how would that glorify Him? The Bible calls Jesus:

“…the Lamb slain from the foundation of the world.” Revelation 13:8.

Salvation is not an afterthought; it was planned in the counsels of God before the world was.

This certainly gives new meaning to God’s omniscience, His all knowing. It also tells us a great deal about the treachery of sin; remember our parents were put under a curse because they ate a piece of fruit!

God was not being nitpicky here, this was a grave offense. It is impossible for us to conceive of a God so holy that a, so-called little white lie is an offense that would cause us to be banished from His presence for eternity.

This was the cause of God’s problem, God wanted us, but He could not have sin in His presence. The shed blood of Christ Jesus is the answer to that problem, and in Him we are pure and undefiled, as if we had never sinned.

“For God so loved the world that He gave His only begotten Son, that whoever believes in Him should not perish but have everlasting life. For God did not send His Son into the world to condemn the world, but that the world through Him might be saved. He who believes in Him is not condemned; but he who does not believe is condemned already, because he has not believed in the name of the only begotten Son of God.” John 3:16-18.

All this worked out before the world was created! This theme becomes ever more striking when we look in the book of Romans.

There it is the power of God for salvation is the gospel of Christ. The gospel (or good news) is that Christ died for our sins; He was buried, and He rose again on the third day.

There is power in no other, neither in smoothness of words or in intellectual arguments, but in Christ alone.

Here too the righteousness of God is revealed, He did not just create us to go into everlasting hell, but He rescued us when we were utterly helpless.

Long ago He knew your name and your sins were laid on Jesus, everything has been taken care of, and by faith we receive the gift of God’s righteousness, and “…from faith to faith…” Romans 1:17, we live our lives in Christ and continue to reveal the righteousness of God.

Notice though that the gospel is the power of God, not of man. I would like to suggest that the omnipotent infinitely all-powerful God would be powerless to save us without the shed blood of the perfect Lamb of God.

This too is corroborated by Scripture.

“Nor is there salvation in any other, for there is no other name under heaven given among men by which we must be saved.” Acts 4:12.

God’s righteousness can be shown in two ways, judgment, or salvation through Christ’s finished work on the cross. God is love He wants to show His righteousness in salvation but many refuse and will see only judgment.

“But now the righteousness of God apart from the law is revealed, being witnessed by the Law and the Prophets, even the righteousness of God which is through faith in Jesus Christ to all and on all who believe. For there is no difference; for all have sinned and fall short of the glory of God, being justified freely by His grace through the redemption that is in Christ Jesus, whom God set forth to be a propitiation [full payment] by His blood, through faith, to demonstrate His righteousness, because in His forbearance God had passed over the sins that were previously committed, to demonstrate at the present time His righteousness, that He might be just and the justifier of the one who has faith in Jesus.” Romans 3:21-26.

The law was not given to help us work our way to heaven, it was given to give us a glimpse of the character of God.

“Therefore by the deeds of the law no flesh will be justified in His sight, for by the law is the knowledge of sin.” Romans 3:20.

How is this knowledge of sin? When you realize that the law shows us who God is, and that in order to come into His presence you will have to have the same characteristics that God has, you begin to understand the hopelessness of our existence.

Sin, by the way, means to miss the mark, and the law shows how widely we have missed it.

This was the downfall of the Jews, they thought that they needed to keep the law, and when they compared themselves with the pagans around them, and even among themselves they looked good.

There is, by the way, a lot of this sort of thinking among men today which gives folks a false sense of security as though they were righteous enough to merit eternity in heaven.

Sin though is a deceitful thing, while men were careful in one area; they would unknowingly fail in another.

The rich young ruler is a good example; this man came before Jesus and asked Him, “Good Teacher, what shall I do to inherit eternal life?”

Jesus said to him, you know the commandments, and He named off the last five of the ten.

The young man responded to this by saying, “All these things I have kept from my youth.”

“So when Jesus heard these things, He said to him, ‘You still lack one thing. Sell all that you have and distribute to the poor, and you will have treasure in heaven; and come, follow Me.’” Luke 18:22.

At this, the young man became very sorrowful for he was very rich; see Luke 18:18-25. This is an odd conversation until you realize that the Lord had put His finger on the rich man’s problem.

He was righteous in his own eyes, “All these I have kept from my youth.” Yet he was guilty of offense in another area.

Sin is very tricky; it can make us feel righteous when we are not. God tells us.

God wants Christians to stretch toward the mark of the high calling of Christ, but no matter how hard one tries, we must not think that we have arrived.

The last thing this world needs is Christians with an over-blown opinion of themselves. When we examine our walk, we must always remember the rich young ruler, and leave the boasting to the Pharisees.

“But God forbid that I should boast except in the cross of our Lord Jesus Christ, by whom the world has been crucified to me, and I to the world.” Galatians 6:14.

“If anyone has ears to hear, let him hear.” And He said to them, “Take heed what you hear. With the same measure you use, it will be measured to you; and to you who hear, more will be given. For whoever has, to him more will be given; but whoever does not have, even what he has will be taken away from him.” Mark 4:23-25.