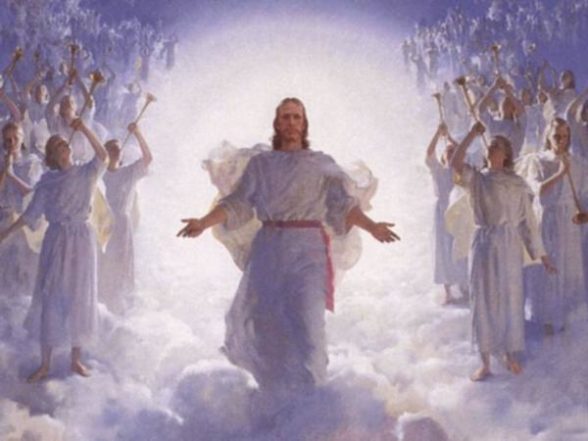 “And to the angel of the church in Sardis write, ‘These things says He who has the seven Spirits of God and the seven stars: ‘I know your works, that you have a name that you are alive, but you are dead.’” Revelation 3:1.

As a reminder, the book of Revelation which contains these letters to the seven churches was written about 90 A.D. long before almost all of the following events occurred.

Hopefully this will save you some confusion when you read the dates given here and elsewhere in the other letters.

The name Sardis means, “those escaping” or “renovation”, the city itself was noted for its wool and carpet industry.

It was the ancient capital of Lydia, where the Imperial cult was strong, and one of the richest cities in the world with a beautiful palace, until a devastating earthquake destroyed it, in 17 A.D.

Assisted by the Emperor Tiberius the city was rebuilt and lasted until completely destroyed in 1402 A.D. by Tamerlane, it was never rebuilt.

Tamerlane 1336-1405, also known as Timur the Lame, was one of the most brutal of conquerors who took most of Syria, and Turkey which is where this city is located.

It might be added that this man and his armies slaughtered an estimated 17 million people, about 5% of the world’s population at that time.

Calling himself the “Sword of Islam”, he conquered Iraq, Iran, Afghanistan, Pakistan, and the north west portion of India, to name a few.

Extremely cruel, he murdered 90,000 people in Baghdad alone, as well as killing many Christians wherever he went. He slaughtered Hindus in Pakistan and massacred the inhabitants of Delhi India in the name of Islam.

Timur the Lame even killed other Muslims with the excuse, that they were bad Muslims. Islam has always spread by wars and threats to “Convert or die!”

The period in church history that Sardis represents is the Reformation about 1517-1750 A.D.

There are numerous churches that escaped the tyranny and the egregious errors of the Catholic Church at that time.

These Reformation churches still exist, so the admonitions in this letter apply even today.

You may well be familiar with a few of these names, the Church of England, the Lutheran Church, the Presbyterian Church, and the Dutch Reformed Church.

“Those escaping” is a good name for this period, for there were many others beside the above groups such as the Waldensians, Lollards, Bohemian Brethren, and the Moravians.

The last two came from the teachings of John Huss who was burned at the stake by the Catholic Church for his beliefs.

The Moravians were strong on missionary work. Some of these groups were in turn persecuted for their beliefs by the Reformation churches.

Men like Martin Luther, Ulrich Zwingli, and Desiderius Erasmus also came out of the dark ages and should be accorded the respect they deserve.

Even today the Reformation is considered one of the greatest successes in Christian history, “I know your works, that you have a name that you are alive, but you are dead”.

Dead? Jesus says they are dead, how can this be? The answer comes from His description of Himself, “He who has the seven Spirits of God and the seven stars”.

The seven Spirits suggests the fullness and wisdom of the Holy Spirit, Jesus has this and it makes Him fully capable of heading the church through the Spirit.

The seven stars which represent the leadership (angels/messengers) in the church are mentioned only twice in the letters to the seven churches.

Until we come to the church of Laodicea where He says, “Behold, I stand at the door and knock” Revelation 3:20a. In Ephesus the Lord had a leadership wholly dedicated to Him, they were in His right hand.

Moving on to Sardis fourteen hundred years later we have a leadership who gave lip service to Christ but He could only say He had them (the seven stars). When we arrive at the church of Laodicea we find the Lord so far out that He stands at the door and knocks!

It cannot be denied that the Holy Spirit did a mighty work to end the murderous tyranny of the church of the dark ages and to lead many, including Martin Luther, to salvation.

In Luther’s case, after much anguish of soul (even to the point of saying that he hated God), the Spirit led Luther to the meaning of these verses:

No Hail Marys, no good deeds, no visiting the Pope or a priest for salvation, no crawling over crushed glass, no works, just receiving a free gift from God by faith.

With this realization the idea is destroyed that a priest can forgive sins, even the scribes and the Pharisees had enough sense to see this.

“When Jesus saw their faith, He said to the paralytic, ‘Son, your sins are forgiven you.’ But some of the scribes were sitting there and reasoning in their hearts, ‘Why does this Man speak blasphemies like this? Who can forgive sins but God alone?’” Mark 2:5-7.

Of the many unbiblical doctrines that the Spirit of God began to destroy through His word, one very important doctrine ignored by the churches stands out as true, the priesthood of the believer.

“…you [all who have accepted Christ as their Savior] also, as living stones, are being built up a spiritual house, a holy priesthood, to offer up spiritual sacrifices acceptable to God through Jesus Christ.” 1 Peter 2:5.

“But you are a chosen generation, a royal priesthood, a holy nation, His own special people, that you may proclaim the praises of Him who called you out of darkness into His marvelous light; who once were not a people but are now the people of God, who had not obtained mercy but now have obtained mercy.” 1 Peter 2:9-10.

As a priest you are equal to the Pope, bishops, priests, monks, and so on, in the eyes of God. And as a priest God has given you the ability to read and understand the Bible on your own without the Pope, the Church, even a Reformation Church interpreting it for you.

With this priesthood come an authority, dignity, purpose and a responsibility to represent the Lord Jesus Christ with a reverence for your position in Christ.

This does not mean that you have to walk around with a scowl on your face pointing a finger; that is what the hypocrites do.

Rather, enjoy life and show the love of God by your words and actions, heeding at all times the Spirit’s hand on your life. Who knows, maybe some folks will see Jesus and be drawn to Him.

“Be watchful, and strengthen the things which remain, that are ready to die, for I have not found your works perfect [finished or complete] before God.” Revelation 3:2.

As to why a movement such as the Reformation should suddenly fail, one might ask the same question Paul asked the Galatians.

“You ran well. Who hindered you from obeying the truth? This persuasion does not come from Him who calls you. ‘A little leaven leavens the whole lump.’” Galatians 5:7-9.

The condensed version and all that really needs to be said is that Reformation leaders failed to rely on the Holy Spirit for wisdom (leading to doctrinal error) and to have Christ as the head of the church in truth.

Having come out of a thousand years of error in the church it was difficult to dispense with the old ways entirely, for instance the unbiblical practice of infant baptism was not discontinued nor was the practice of sprinkling.

Though the priesthood of the believer is preached, the church is still made up of laymen and clergy. These men were not watchful and did not strengthen the doctrines that they tried so hard to birth.

Instead when political turmoil in the form of a Peasant’s Revolt in 1524-1525 threatened peace, Luther decided that government control of religion was necessary to maintain law and order.

As a result different countries had state religions such as Lutheranism in Germany and Calvinism in Switzerland and in many cases the required religion might vary from district to district.

This meant that if you were born in or moved to a Catholic district your religion was Catholic, while across the line it may be Lutheranism and if you wanted to be Lutheran, you had to move to that district.

There was also the very real possibility that one would be persecuted, imprisoned or put to death if they tried to practice their chosen denomination in any other church district!

This in turn means that ungodly men could rise to the top of a church and have control over the doctrines of Christ’s churches. Does any of this sound familiar?

In Revelation 3:2 earlier the church of Sardis was told by the Lord Jesus to, “Be watchful…”, something which every Christian should do continually because Satan our constant untiring adversary ever waits to deceive us.

“Be sober, be vigilant; because your adversary the devil walks about like a roaring lion, seeking whom he may devour. Resist him, steadfast in the faith, knowing that the same sufferings are experienced by your brotherhood in the world.” 1 Peter 5:8-9.

Verse 2 also states, “and strengthen the things which remain, that are ready to die…” it is important to understand, fortify, and teach Bible doctrine and to keep it pure.

Test those who come into the church with a new revelation on Scripture.

The Lord Jesus gives the church at Sardis essentially the same advice that He gave to Ephesus, remember, repent, return.

“Remember therefore from where you have fallen; repent and do the first works…” Revelation 2:5a.

“Remember therefore how you have received and heard; hold fast and repent.” Revelation 3:3a.

How did Sardis receive? They received by learning of God’s grace in salvation, they were no longer under the thumb of a church with dead rules, but free in Christ through His shed blood on the cross.

“For by grace you have been saved through faith, and that not of yourselves; it it’s the gift of God, not of works, lest anyone should boast.” Ephesians 2:8-9.

Jesus is warning the church that the study and keeping of the Scriptures is extremely important.

Not only the Old and New Testaments but there is a need to understand prophecy because it gives the signs of Christ’s return to rapture all Christians out of the world.

Without this knowledge Christians may not prepare themselves to meet the Lord in the air.

What might one be doing when they are raptured out of the world? Committing adultery, telling coarse jokes to their unsaved friends at work or in a bar, or verbally abusing their spouse or unsaved children?

Or perhaps one might find themselves sitting alone in a church which emptied in the blink of an eye?

Prophecy is very important; it can make the difference between life and an eternity in hell.

“And now, little children, abide in Him [Jesus], that when He appears, we may have confidence and not be ashamed before Him at His coming.” 1 John 2:28.