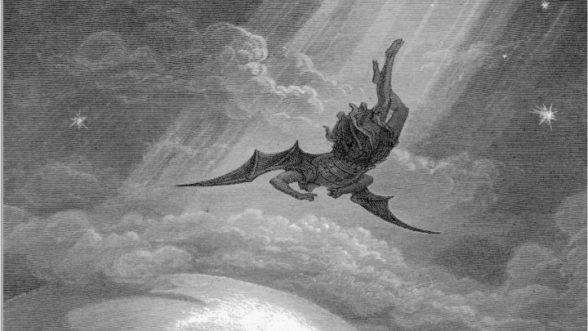 The three posts published 8-9-22, 8-12-22 and 8-15-22 covered Revelation 12:1-6. The first five verses briefly gave a history of Israel’s travail in bringing forth the Messiah including; His birth, death, and resurrection.

There is a gap between the historical narrative of verses 1 through 5 and that of verse 6, a gap of about two thousand years which takes us to Israel in the second half of the tribulation.

At this point verse 7 describes a scene which will take place far above the earth.

Before continuing let us do a bit of a review.

By the end of Revelation chapter nine six of seven trumpets had been sounded and an army of 200 million demon horsemen had been let loose to kill one third of mankind.

Yet, in spite of all this, men still do not repent of their murders, sorceries, sexual immorality, or their thefts. The account of this judgment ends here and does not pick up again until chapter 16.

Chapter 10 began with an angel who held a little scroll which the Apostle John was told to eat. This scroll represents the word of God and more specifically His prophecies.

There is more in this chapter than that, however, in a nutshell, John is being told that this book is not finished yet, and that he must prophesy about many more things.

Beginning with 10 through chapters 11 to 14, we are told of the things that happen in the middle of the tribulation. This is a hard thing to conceive because these prophecies are spread across five chapters, so we tend to get lost in the details.

If you have seen the “Lord of the Rings” movie trilogy you may be able to visualize this. In the first movie there are nine friends setting out on a quest.

By the end of the movie one is lost, one is dead, two have been kidnapped, two others, Frodo and Samwise, are headed in one direction and three, Aragorn, Legolas, and Gimli chase the kidnappers.

This “Fellowship of the Ring” is at times broken apart even more and is not completely reunited again until the end of the third movie. The genius of the movies is that all of these individuals are shown in separate chapters yet working within the same time frames.

This is like the middle of the tribulation, in a sense, the eye of the hurricane though many horrifying events are taking place yet within the same time frame.

Revelation chapter 11 reveals to us that the ancient Jewish temple will be rebuilt and speaks of the complete domination of Israel by the Gentiles in the second half of the tribulation.

After the death of the witnesses, their resurrection and ascension into heaven it is announced that:

“The second woe is past. Behold, the third woe is coming quickly.” Revelation 11:14.

The second woe of the three prophesied, began in chapter 9, and is the pestilence of the 200 million demon army, meaning that this judgment which began with the sixth trumpet blast is finished in mid-tribulation.

Revelation 11:15 is the sounding of the seventh trumpet announcing the third, worst, and last woe which consists of the 7 bowl judgments soon to be poured out.

There is rejoicing in heaven, not because of the horrific judgments to come, but because it will soon be over and the Lord Jesus Christ will reign.

Chapter 12 which, as we have seen, deals with Israel will be taken up again shortly. Chapter 13 gives a more detailed description of the beast and his prophet along with more mid-tribulation happenings, including the giving of the number 666.

Chapter 14 reveals a number of other powerful and pivotal events. While chapter 15 builds up to the third woe, the pouring out of the bowls of the wrath of God.

With this we finally begin moving away from the middle of the tribulation into the last half. Chapter 16 describes the pouring out of the seven bowls of wrath.

Let us now return to our study of Revelation 12 beginning with verse 7.

Some expositors feel that the term war indicates that this is an ongoing conflict, since war is made up of a series of skirmishes, like our own Civil War, or World War II.

There is an interesting account given by an angel sent from God to Daniel the prophet that indicates that there are not only hierarchies but tensions between fallen angels and the angels of God.

“Then he [an angel from God] said to me, ‘Do not fear, Daniel, for from the first day that you set your heart to understand, and to humble yourself before your God, your words were heard; and I have come because of your words. But the prince of the kingdom of Persia withstood me twenty-one days; and behold, Michael [means “who is like God”, an archangel], one of the chief princes, came to help me, for I had been left alone there with the kings of Persia [fallen angels].’” Daniel 10:12-13.

However, all Scripture tells us is that, “war broke out in heaven”, so while you might want to run with this thought, it may not be wise to be too dogmatic.

The most important part of this statement is that the war is in heaven, and this you need to understand. There are three heavens spoken of in the Bible and it is necessary to know which is which.

The word for heaven in both the Hebrew and the Greek is the same for all, so the usage of the word is important.

“Then God said, ‘Let the waters abound with an abundance of living creatures, and let birds fly above the earth across the face of the firmament [expanse] of the heavens.’” Genesis 1:20.

“When I consider Your heavens, the work of Your fingers, the moon and the stars, which You have ordained, what is man that You are mindful of him, and the son of man that You visit him?” Psalm 8:3-4.

The heaven referred to in Psalm 8 is not the third heaven where God resides, rather it is the second heaven which we know as outer space, and it may even be limited to our solar system.

God cannot have evil in His presence.

“[believers who]…were stoned, they were sawn in two, were tempted, were slain with the sword. They wandered about in sheepskins and goatskins, being destitute, afflicted, tormented – of whom the world was not worthy. They wandered in deserts and mountains, in dens and caves of the earth.” Hebrews 11:37-38.

These saints will not walk the streets of gold in heaven and have some smirking fallen angel, who may even have been responsible for their torment, walk past them.

Satan does have access to God, as seen here.

“Now there was a day when the sons of God came to present themselves before the Lord, and Satan also came among them.” Job 1:6.

And in Revelation 12:10 it says that Satan accuses the brethren before God day and night.

However the place where he presents himself before the Lord is more likely to be in what might be called a judicial location like the following.

“…mount of the congregation on the farthest sides of the north…” Isaiah 14:13.

Satan made reference to this location in his rebellious heart, indicating that it is an important place not in heaven proper.

“For you [Satan] have said in your heart: ‘I will ascend into heaven, I will exalt my throne above the stars [angels] of God; I will also sit on the mount of the congregation on the farthest sides of the north; I will ascend above the heights of the clouds, I will be like the Most High.’ Yet you shall be brought down to Sheol [hell], to the lowest depths of the Pit.” Isaiah 14:13-15.

And it says that “they did not prevail”, the marginal in my Bible for prevail says, “were not strong enough”; no surprise there. If you can imagine an enemy trying to use a soap bubble to smother a hydrogen bomb, then you have an idea of how this battle will play out.