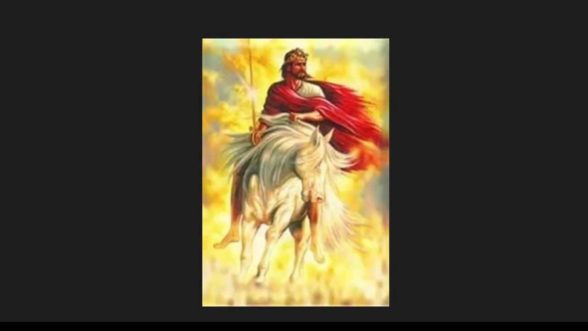 “Then a voice came from the throne, saying, ‘Praise our God, all you His servants and those who fear Him, both small and great!’ And I heard, as it were the voice of a great multitude, as the sound of many waters and as the sound of mighty thunderings, saying, ‘Alleluia! For the Lord God Omnipotent reigns!’ Let us be glad and rejoice and give Him glory, for the marriage of the Lamb has come, and His wife has made herself ready. And to her it was granted to be arrayed in fine linen, clean and bright, for the fine linen is the righteous acts of the saints. Then he said to me, ‘Write: “Blessed are those who are called to the marriage supper of the Lamb!”’ And he said to me, ‘These are the true sayings of God.’ And I fell at his feet to worship him. But he said to me, ‘See that you do not do that! I am your fellow servant, and of your brethren who have the testimony of Jesus. Worship God! For the testimony of Jesus is the spirit of prophecy.’” Revelation 19:5-10.

“Then I saw heaven opened, and behold, a white horse. And He who sat on him was called Faithful and True, and in righteousness He judges and makes war. His eyes were like a flame of fire, and on His head were many crowns. He had a name written that no one knew except Himself. He was clothed with a robe dipped in blood, and His name is called The Word of God. And the armies in heaven, clothed in fine linen, white and clean, followed Him on white horses. Now out of His mouth goes a sharp sword, that with it He should strike the nations. And He Himself will rule them with a rod of iron. He Himself treads the winepress of the fierceness and wrath of Almighty God. And He has on His robe and on His thigh a name written: KING OF KINGS AND LORD OF LORDS.” Revelation 19:11-16.

The above has been retained for context.

“Then I saw an angel standing in the sun; and he cried with a loud voice, saying to all the birds that fly in the midst of heaven, ‘Come and gather together for the supper of the great God, that you may eat the flesh of kings, the flesh of captains, the flesh of mighty men, the flesh of horses and of those who sit on them, and the flesh of all people, free and slave, both small and great.’” Revelation 19:17-18.

What an ignominious end, to have their dead bodies lying rotting, covered with flies and ravenous carrion eaters. All who have the mark of the beast were warned in no uncertain terms of the horrors to befall them.

“Then a third angel followed them, saying with a loud voice, ‘If anyone worships the beast and his image, and receives his mark on his forehead or on his hand, he himself shall also drink of the wine of the wrath of God, which is poured out full strength into the cup of His indignation. And he shall be tormented with fire and brimstone in the presence of the holy angels and in the presence of the Lamb. And the smoke of their torment ascends forever and ever; and they have no rest day or night, who worship the beast and his image, and whoever receives the mark of his name.’” Revelation 14:9-11.

This image in the holy place is called the “abomination of desolation” by Jesus in Matthew 24:15 see below. His instructions are to flee from the grasp of the beast, because the persecution of Israel and all believers will be more deadly than ever before!

“Therefore when you see the ‘abomination of desolation,’ spoken of by Daniel the prophet, standing in the holy place” (whoever reads, let him understand)…” Matthew 24:15.

The pressure to take the number is intense but the punishment described by the third angel is horrifying and eternal.

Life during this time of tribulation will be unbearable and the stench of death all around will be dreadful and common.

But what is a person’s 60 or 70 years on earth compared to an eternal unending trillions of years in the lake of fire with the devil and his angels?

“And I saw the beast, the kings of the earth, and their armies, gathered together to make war against Him who sat on the horse and against His army. Then the beast was captured, and with him the false prophet who worked signs in his presence, by which he deceived those who received the mark of the beast and those who worshiped his image. These two were cast alive into the lake of fire burning with brimstone. And the rest were killed with the sword which proceeded from the mouth of Him who sat on the horse. And all the birds were filled with their flesh.” Revelation 19:19-21.

It is interesting to contemplate the scene; here we have the beast and his powerful armies gathered in semi-darkness with the intention of killing every last Jew (when the angel poured out the fifth bowl the beast’s kingdom became full of darkness).

“And I will show wonders in the heavens and in the earth: Blood and fire and pillars of smoke. The sun shall be turned into darkness, and the moon into blood, before the coming of the great and terrible day of the Lord.” Joel 2:30-31.

Suddenly the sky is ripped open by a glorious heavenly light, many miles wide, the Lord and His followers are riding out of the sky on horses.

Jesus also tells of His return, His glorious appearing in Matthew 24:26-27 below.

And what is the response to this awe inspiring sight? Why they turn to fight Him!

This is the depraved or debased mind, as mentioned in Romans1:28, having reached the very depths of depravity, God gave them over to a non-functioning mind, a mind that does not work.

“And even as they did not like to retain God in their knowledge, God gave them over to a debased mind, to do those things which are not fitting…” Romans 1:28.

The beast quickly realizes his error because both he and the false prophet are cast live into the lake of fire; evidently they are the first casualties of the battle.

The significance of this is that these two men are the only occupants of the lake of fire until judgment day, about a thousand years later.

My friends, this is not something you want anything to do with; if you have never accepted Jesus Christ as your Savior, I urge you to do so today before it is too late.

“And the rest were killed with the sword…” we now come to the much anticipated end of the seven year tribulation period.

It is time to consider the two edged sword in the mouth of Christ Jesus. The sword as we have seen earlier is the word of God, Jesus speaks and things disassemble as easily as they were created. So what is the effect of the word going forth from the Christ’s mouth?

“And this shall be the plague with which the Lord will strike all the people who fought against Jerusalem: Their flesh shall dissolve while the stand on their feet, their eyes shall dissolve I their sockets, and their tongues shall dissolve in their mouths. It shall come to pass in that day that a great panic from the Lord will be among them. Everyone will seize the hand of his neighbor, and raise his hand against his neighbor’s hand…” Zechariah 14:12-13.

We will next examine the millennium and the great judgment day.