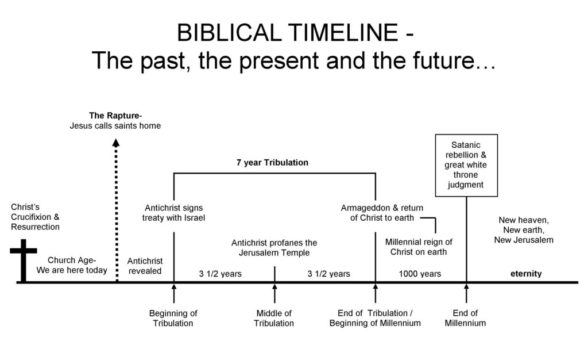 Chapter 19 ends with the destruction of the beast, false prophet and his armies; with the added horror of the beast and false prophet being cast alive into the lake of fire. This ends the last great battle on earth, often called the battle of Armageddon.

In his letter to the Thessalonian church, the apostle Paul said this among other things.

“…since it is a righteous thing with God to repay with tribulation those who trouble you, and to give you who are troubled rest with us when the Lord Jesus is revealed from heaven with His mighty angels, in flaming fire taking vengeance on those who do not know God, and on those who do not obey the gospel of our Lord Jesus Christ. These shall be punished with everlasting destruction from the presence of the Lord and from the glory of His power, when He comes, in that Day, to be glorified in His saints and to be admired among all those who believe, because our testimony among you was believed.” 2 Thessalonians 1:6-10.

And again in Malachi it is written.

“For behold, the day is coming, burning like an oven, and all the proud, yes, all who do wickedly will be stubble. And the day which is coming shall burn them up,” Says the Lord of hosts, “that will leave them neither root nor branch. But to you who fear My name the Sun of Righteousness shall arise with healing in His wings; and you shall go out and grow fat like stall-fed calves. You shall trample the wicked, for they shall be ashes under the soles of your feet on the day that I do this,” says the Lord of hosts.” Malachi 4:1-3.

After the battle of Armageddon is fought and all human rebellion is put down, the very next event comes when an angel takes hold of Satan and binds him with a great chain (there is no reason to think that this is not a real chain). Then casts him into the abyss and sets a seal on it that will not be broken for a thousand years.

Since the word used here is the abyss or bottomless pit, it is not necessary to believe that Satan is imprisoned with the angels in a place called Tartarus, in “…chains of darkness, to be reserved for judgment…” 2 Peter 2:4b.

The terms hell, Hades, the abyss, bottomless pit, Gehenna, and the lake of fire make an interesting and frightening study, one which should be spoken more of in the church today.

It is indicated that the fallen angels, demons and such will be removed from among mankind too.

“It shall be in that day,” says the Lord of hosts, “that I will cut off the names of the idols from the land, and they shall no longer be remembered. I will also cause the prophets and the unclean spirit to depart from the land.” Zechariah 13:2.

Where will they go? The quickest and safest answer would be, to the bottomless pit; however, it could also be the ruins of Babylon that hold them.

“… [And the angel] cried mightily with a loud voice, saying, ‘Babylon the great is fallen, is fallen, and has become a habitation of demons, a prison for every foul spirit, and a cage for every unclean and hated bird!’” Revelation 18:2.

Regardless of where they go, it will be a remarkable event when Satan and his vile companions are confined for a thousand years.

Considering the fact that these unclean spirits are constantly accusing us or pressuring us to do evil, the sudden cessation of their voices will be a peaceful silence we have never experienced before!

Revelation 20:2 also gives us all the names for Satan; the dragon, which shows his bloodthirsty nature (fiery red dragon in Revelation 12:3). Satan is also the serpent of old, indicating that this is the same as the one in the Garden of Eden, with his cunning deceitfulness.

Devil means accuser, and Satan means adversary. There can be no mistake; all of these are one and the same person who has tormented mankind throughout the ages.

“And I saw thrones, and they sat on them, and judgment was committed to them. And I saw the souls of those who had been beheaded for their witness to Jesus and for the word of God, who had not worshiped the beast or his image, and had not received his mark on their foreheads or on their hands. And they lived and reigned with Christ for a thousand years.” Revelation 20:4.

There is one other thing recorded in Matthew 25 that occurs either after the battle of Armageddon, and before the chaining of Satan, see Revelation 20:1-2 (quoted below). Or between the two verses after this in Revelation 20:3 and 4.

“Then I saw an angel coming down from heaven, having the key to the bottomless pit and a great chain in his hand. He laid hold of the dragon, that serpent of old, who is the Devil and Satan, and bound him for a thousand years…” Revelation 20:1-2.

You may be familiar with the following passage regarding the separation of the sheep from the goats spoken by Jesus in Matthew 25:31-46.

“When the Son of Man comes in His glory, and all the holy angels with Him, then He will sit on the throne of His glory. All the nations will be gathered before Him, and He will separate them one from another, as a shepherd divides his sheep from the goats. And He will set the sheep on His right hand, but the goats on the left. Then the King will say to those on His right hand, ‘Come, you blessed of My Father, inherit the kingdom prepared for you from the foundation of the world: for I was hungry and you gave Me food; I was thirsty and you gave Me drink; I was a stranger and you took Me in; I was naked and you clothed Me; I was sick and you visited Me; I was in prison and you came to Me.’” Matthew 25:31-36.

After mentioning six things that the righteous did for Him, they ask Him when they did such things.

“And the King will answer and say to them, ‘Assuredly, I say to you, inasmuch as you did it to one of the least of these My brethren, you did it to Me.’” Matthew 25:40.

“What does it profit, my brethren, if someone says he has faith but does not have works? Can faith save him? If a brother or sister is naked and destitute of daily food, and one of you says to them, ‘Depart in peace, be warmed and filled,’ but you do not give them the things which are needed for the body, what does it profit? Thus also faith by itself, if it does not have works, is dead. But someone will say, ‘You have faith, and I have works.’ Show me your faith without your works, and I will show you my faith by my works.” James 2:14-18.

Then the King, Jesus Christ speaking here in Matthew 25 will turn to the other group and say.

Here He also mentions the same six things to these people, and they ask the same question as the Christians, “When did we see you in all these circumstances?”

Or it is possible that the above separation of the sheep from the goats could have occurred between Revelation 20:3 and 4 shown as follows.

“…and he cast him [Satan] into the bottomless pit, and shut him up, and set a seal on him, so that he should deceive the nations no more till the thousand years were finished. But after these things he must be released for a little while.” Revelation 20:3.

Perhaps at this point the Lord then separates the sheep from the goats as seen in Matthew 25:31-46, then goes on to the following.

“And I saw thrones, and they sat on them, and judgment was committed to them. Then I saw the souls of those who been beheaded for their witness to Jesus and for the word of God, who had not worshiped the beast or his image, and had not received his mark on their foreheads or on their hands. And they lived and reigned with Christ for a thousand years.” Revelation 20:4.

So this is what happens to all of the rest of those who did not go or try to go to Armageddon to fight; two groups, those who rejected the Lord Jesus Christ and those who accepted Him as their Savior.

The ungodly are cast into hell and the godly go on into the millennium. It is possible that shortly after these events that the last part of the marriage of the Lamb to the bride, the marriage supper, is held here on a restored and beautified earth with the tribulation saints in attendance.

“Then he said to me, ‘Write: Blessed are those who are called to the marriage supper of the Lamb!’ And he said to me, ‘These are the true sayings of God.’” Revelation 19:9.

Returning to verse four quoted a few paragraphs earlier, John sees thrones set up and judgment is given to the martyrs of the tribulation who had been beheaded for their witness and refusal to worship the beast or to take his mark.

“And they lived and reigned with Christ for a thousand years.” Revelation 20:4 last sentence.

So the millennium will be populated with godly people who came through the tribulation and then live the entire thousand years. At the same time there will be saints in eternal resurrection bodies working alongside of them.

A thousand years is repeated 6 times in the first seven verses which cover the entire millennial period. Yet there are many who deny that there will even be a millennium.

I apologize, but I do not have much patience with this kind of thinking. One has to allegorize a lot of Scripture to reach such a conclusion, this in turn has the effect of sawing off a little of a table leg to make it sit level, but now it wobbles the other way, and so on.

If you remove the millennium, what happens to passages like the following?

“The wolf also shall dwell with the lamb, the leopard shall lie down with the young goat, the calf and the young lion and the fatling together; and a little child shall lead them. The cow and the bear shall graze; their young ones shall lie down together; and the lion shall eat straw like the ox. The nursing child shall play by the cobra’s hole, and the weaned child shall put his hand in the viper’s den. They shall not hurt nor destroy in all My holy mountain, for the earth shall be full of the knowledge of the Lord as the waters cover the sea.” Isaiah 11:6-9.

“The wolf and the lamb shall feed together, the lion shall eat straw like the ox, and dust shall be the serpent’s food. They shall not hurt nor destroy in all My holy mountain, ’says the Lord.’” Isaiah 65:25.

You cannot build a consistent system of Biblical beliefs on allegorical speculation; it only makes the interpretation of other Scriptures suspect.