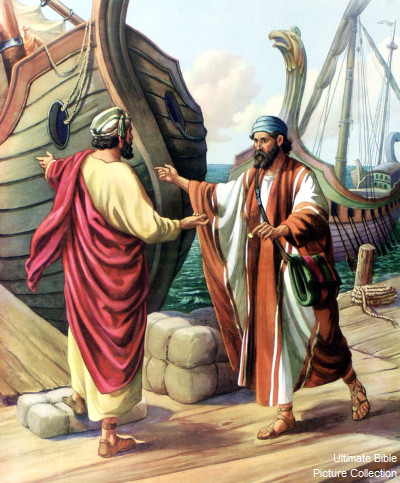 “Now the word of the Lord came to Jonah the son of Amittai, saying, ‘Arise, go to Nineveh, that great city, and cry out against it; for their wickedness has come up before Me’” Jonah 1:1-2.

The book of Jonah was written by the prophet Jonah in 760 B.C. and far from being an allegory as some postulate; it is a true and historically accurate account of God’s salvation of a heathen city.

Nineveh, located in northern Iraq, was the capital of Assyria a menacing nation of such extreme cruelty that whole towns would commit suicide rather than be captured by them.

While at the time of Jonah the Assyrians were in a period of decline in power, that stopped afterward soon enough in 745 B.C. when a mighty warrior by the name of Tiglath-pileser III aka Tiglath-pileser I seized the throne.

During his conquests he overran Israel which remained a vassal until they revolted against Assyria after his death. Samaria the capital of the northern kingdom was then besieged and finally taken by Sargon II in 721 B.C. at which time the people were taken captive and carried off to other lands.

So Jonah was sent to Nineveh during her declining period under Ashur-dan III (772-755 B.C.). But declining or not Assyria was still and would continue to be wicked and cruel, and Jonah knew this.

That Jonah was a real person and his account was a real account, is attested to by none other than the final authority, Jesus Christ.

“But He [Jesus] answered and said to them, ‘An evil and adulterous generation seeks after a sign, and no sign will be given to it except the sign of the prophet Jonah. For as Jonah was three days and three nights in the belly of the great fish, so will the Son of Man be three days and three nights in the heart of the earth. The men of Nineveh will rise up in the judgment with this generation and condemn it, because they repented at the preaching of Jonah; and indeed a greater than Jonah is here.’” Matthew 12:39-41.

The existence of the prophet Jonah is also corroborated by Scripture in another place.

“He [King Jeroboam II 794-753 B.C.] restored the territory of Israel from the entrance of Hamath to the Sea of the Arabah, according to the word of the Lord God of Israel, which He had spoken through His servant Jonah the son of Amittai, the prophet who was from Gath Hepher.” 2 Kings 14:25.

God says of the city of Nineveh, “their wickedness has come up before Me.” That is that they are so wicked that God had to openly intercede.

This is something that He will not likely do again until the prophesied invasion of Israel by Russia and her allies in the near future, see, “Flash Russia Invades Israel” posted here on 10-7-15 and “An Evil Plan” posted on 10-13-15.

Now this is the only incident recorded in Scripture of a prophet of Israel being sent to an ungodly nation to preach repentance to them. However it is true that there are many prophecies in Scripture about places like Egypt, Edom, Babylon, and Assyria.

There are those who believe that this was in part to shame Israel because they were a nation which had a full knowledge of the true and living God.

The Jews having had numerous warnings from their own prophets to return to the Lord their God, which they ignored, while an entire wicked city repented at the preaching of one prophet, Jonah.

Some folks think that Jonah fled out of cowardice or that he was angry with God, but the fact is, I believe that he ran because he wanted the Ninevites to perish, knowing that it would prevent them from harming the nation of Israel.

Whether Jonah was influenced by the prophecies of Amos, a contemporary who warned the northern kingdom of Israel to turn from their wicked idolatrous ways or they would be invaded and carried away is unknown.

Israel having ignored Amos’ warnings was invaded and carried off by Assyria about 39 years later in 721 B.C. as mentioned earlier.

Whatever Jonah’s motives were, an insight into his thinking is given later in the book after God spares Nineveh.

“So he prayed to the Lord, and said, ‘Ah, Lord, was not this what I said when I was still in my country? Therefore I fled previously to Tarshish; for I know that You are a gracious and merciful God, slow to anger and abundant in lovingkindness, One who relents from doing harm.’” Jonah 4:2.

Notice the results of Jonah’s decision to reject God’s commission to him he, “went down to Joppa” paid the fare and, “went down into it [the ship]”; the prophet or Christian who separates himself from God will always decline, go down spiritually.

“Beware, brethren, lest there be in any of you an evil heart of unbelief in departing from the living God; but exhort [encourage] one another daily, while it is called ‘Today,’ lest any of you be hardened through the deceitfulness of sin.” Hebrews 3:12-13.

“I will sing of mercy and justice; to You, O Lord, I will sing praises. I will behave wisely in a perfect [blameless] way. Oh, when will You come to me? I will walk within my house with a perfect heart. I will set nothing wicked [worthless] before my eyes; I hate the work of those who fall away; it shall not cling to me. A perverse heart shall depart form me; I will not know wickedness.” Psalm 101:1-3.

As an aside, Joppa is an extremely old city now known as Jaffa in Israel. It is also where the Apostle Peter had his vision of a sheet full of many animals being let down to him while he stayed with Simon the tanner, Acts chapter 10.

Jonah having decided in his misguided way to disobey God by going as far away as he could, decided to go to Tarshish on board a Phoenician ship. The Phoenicians were seafaring traders who plied numerous Mediterranean ports some as far away as Britain, even down the coast of Africa.

The ships were well built, the sailors were experienced, and business was good. Because of their extensive travel the location of Tarshish is uncertain and possibly one of several sites such as Spain, Cyprus, or even Britain. Wherever Tarshish was, it was a long way off from Nineveh.

“But Jonah arose to flee to Tarshish from the presence of the Lord.” Jonah 1:3a.

Many idolatrous religions of that day had gods who were the god of certain locations depending on the religion. The king of Syria made the mistake of thinking that the God of Israel was limited in this manner and paid dearly for it.

“Then a man of God came and spoke to the king of Israel, and said, ‘Thus says the Lord: “Because the Syrians have said, ‘The Lord is God of the hills, but He is not God of the valleys,’ therefore I will deliver all this great multitude into your hand, and you shall know that I am the Lord.”’” 1 Kings 20:28.

Jonah was a prophet; it is unlikely that he would have thought that he could actually flee from the literal presence of the Lord. It is more likely that he was fleeing from the presence of God in Israel and by distance, even though he was still in God’s presence, he was unable physically to do the task given to him.

“Where can I go from Your Spirit? Or where can I flee from Your presence? If I ascend into heaven, You are there; if I make my bed in hell, behold, You are there, if I take the wings of the morning, and dwell in the uttermost parts of the sea, even there Your hand shall lead me, and Your right hand shall hold me.” Psalm 139:7-10.

Though Jonah may very well have memorized Psalm 139 and knew full well that one cannot escape God’s presence he may not have taken into account God’s reach.