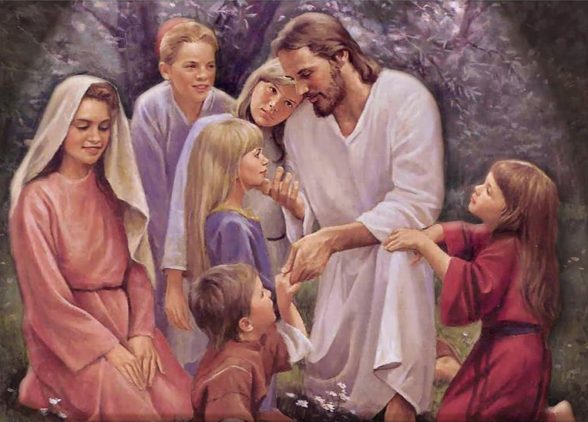 Now for the second time in this chapter we see the term “through Him” which was first used in John 1:3.

Whenever Jesus Christ is mentioned in conjunction with creation it is always referred to as being done through Him.

“…and to make all see what is the fellowship of the mystery, which from the beginning of the ages has been hidden in God who created all things through Jesus Christ…” Ephesians 3:9.

“… [God] has in these last days spoken to us by His Son, whom He has appointed heir of all things, through whom also He made the worlds…” Hebrews 1:2.

The world that did not know Him is the Gentile world that separated from God early on after the flood of Noah’s day. The Gentiles had turned away from God and wandered into the darkness that surrounds the camp of God.

The farther they wandered into the dark the more they became chained to the demonic world, which may promise great things but it only leads to poverty of soul and despair.

“Nevertheless they [Israel] would not hear [the prophets], but stiffened their necks, like the necks of their fathers, who did not believe in the Lord their God. And they rejected His statutes and His covenant that He had made with their fathers, and His testimonies which He had testified against them; they followed idols, became idolaters, and went after the nations [Gentiles] who were all around them, concerning whom the Lord had charged them that they should not do like them.” 2 Kings 17:14-15.

“This I say, therefore, and testify in the Lord, that you should no longer walk as the rest of the Gentiles walk, in the futility of their mind, having their understanding darkened, being alienated from the life of God, because of the ignorance that is in them, because of the blindness of their heart; who, being past feeling, have given themselves over to lewdness, to work all uncleanness with greediness.” Ephesians 4:17-19.

“God, who made the world and everything in it, since He is Lord of heaven and earth, does not dwell in temples made with hands. Nor is He worshiped with men’s hands, as though He needed anything, since He gives to all life, breath, and all things. And He has made from one blood every nation of men to dwell on all the face of the earth, and has determined their preappointed times and the boundaries of their dwellings, so that they should seek the Lord, in the hope that they might grope for Him and find Him, though He is not far from each one of us…” Acts 17:24-27.

Jesus came to set us free from all of these things.

“…Most assuredly, I say to you, whoever commits sin is a slave of sin. And a slave does not abide in the house forever, but a son abides forever. Therefore if the Son makes you free, you shall be free indeed.” John 8:34b-36.

“And you He made alive, who were dead in trespasses and sins, in which you once walked according to the course of this world, according to the prince of the power of the air, the spirit who now works in the sons of disobedience, among whom also we all once conducted ourselves in the lusts of our flesh, fulfilling the desires of the flesh and of the mind, and were by nature children of wrath, just as the others.” Ephesians 2:1-3.

“Therefore remember that you, once Gentiles in the flesh – who are called Uncircumcision by what is called the Circumcision made in the flesh by hands – that at that time you were without Christ, being aliens from the commonwealth of Israel and strangers from the covenants of promise, having no hope and without God in the world. But now in Christ Jesus you who once were far off have been made near by the blood of Christ.” Ephesians 2:11-13.

There is freedom in Christ, freedom from bondage, freedom from superstition, and freedom from the fear of death by knowing we shall ever be with Him, and that He will never leave us nor forsake us.

Jesus came to His own, Israel, and those who should have received Him did not and as a nation they rejected Him, but not all.

All who received the message and baptism of John received Jesus Christ. And multitudes more that were healed, fed, and listened to His words, saw Jesus as the Christ. Indeed they had this to say of Him.

“Then many came to Him and said, ‘John performed no sign, but all the things that John spoke about this Man were true.’ And many believed in Him there.” John 10:41.

“…who were born, not of blood…” while difficult to understand, the three things spoken of in this verse are important. People do not become Christians because of their bloodline. If someone is the child of a great pastor, evangelist, teacher, or missionary, they are not automatically Christians.

This is a grave error, everyone must come to Christ on their own; there are children of either great, or everyday Christians who are now in hell because they did not take the time to examine the gospel carefully enough to see this.

“…nor the will of the flesh…” this applies to those who, as Tim LaHaye calls it, practice churchianity. That is to say they think that joining a church and going every Sunday is what gets them into heaven, or teaching Sunday school, singing in the choir, doing good deeds, or even becoming a pastor. None of these things apply.

“Not everyone who says to Me, ‘Lord, Lord,’ shall enter the kingdom of heaven, but he who does the will of My Father in heaven. Many will say to Me in that day, ‘Lord, Lord, have we not prophesied in Your name, cast out demons in Your name and done may wonders in Your name?’ And then I will declare to them, ‘I never knew you; depart from Me, you who practice lawlessness!’” Matthew 7:21-23.

Unless each individual person accepts Christ as his personal savior they surely will not enter heaven.

“…nor of the will of man…” some believe that ordination, or the blessing of the priest, or the intervention of some other man will save them, not true, so-called holy men cannot even save themselves, much less someone else.

Salvation rests in Christ alone, only He has paid the infinite ransom for our souls. It is none of these, “…but of God.” and God alone.