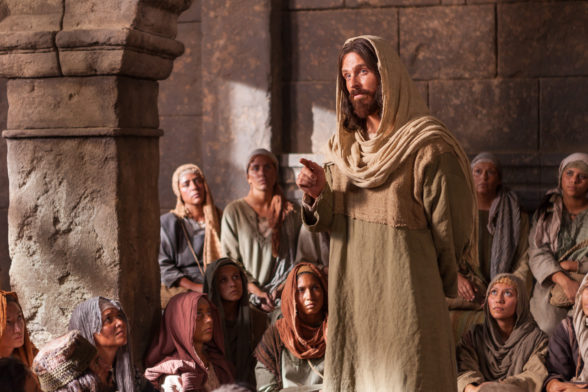 When we think of God it is usually in finite terms like a scale. For instance, if we were to judge men on a scale of say, one to one hundred, comparing them to angels, we might say, Billy Graham is very holy, but he is probably only about a twenty on our mental scale.

Now angels are in the presence of God, so they must be very holy, perhaps eighty on the scale, which means that God who is holiest of all would be one hundred on our scale, maybe a hundred and ten!

Therein is the error of our finite thinking. There is no upper end to the scale, it does not end at one hundred, or any number, the upper end does not exist.

Double entendre, risqué thoughts with a double meaning, snickering at unfortunate phrases, lusts, even when looking at things which would incite lust in most people; these are not the things in the makeup of a holy God.

This is what makes the concept of a holy God becoming a Man and dwelling among such a defiled race truly a striking thought.

There is little difference between this and the disgusting mental image of you and me wading around waist deep in raw sewage all day.

Yet, we would gladly do so if our children were trapped somewhere in a swamp of this filth. Consider Christ in this manner, it may change the way you perceive Him.

Can you see now the evil in saying that Christ was infested with a demon? Not that He was just insane and a liar but infested with the lowest of dark creatures who engender in men the most vile of excesses and filth.

They did indeed dishonor the Prince of Peace, King of kings and God of all creation. Men today are returning to these same demons for inspiration, daily you read or hear of the filth they spew out against Christ.

Judgment Day is coming and every one of them will stand before the Lord of all, and give an account of themselves.

There is a vast difference between these two statements, beginning with the fact that the Greek words used for see and taste are just as different as they appear in English, so the misquote was careless.

Jesus did not say that Christians would not die; He said they would not see death, and whenever He referred to a believer as having died He would say that they sleep.

“But I do not want you to be ignorant, brethren, concerning those who have fallen asleep, lest you sorrow as others who have no hope. For if we believe that Jesus died and rose again, even so God will bring with Him those who sleep in Jesus” 1 Thessalonians 4:13-14.

I believe this story is about Catherine Booth, wife of the founder of the Salvation Army, William Booth.

When Mrs. Booth was on her deathbed, she was in a great deal of pain from cancer; surrounded by friends, she suddenly cried out, “So this is death, why this is glorious!”

This, in a very real way, is what Jesus meant when He said His followers would not see death.

As for those who go to a Christless grave, they see it and truly taste it as they sink into the dark abyss of death.

Even the God hating atheists often cry out that their feet are burning or scream in terror as they realize that they really are dying and are going to face the God they spent their lives mocking and defiling in the name of His Son Jesus.

“Jesus answered, ‘If I honor Myself, My honor is nothing. It is My Father who honors Me, of whom you say that He is your God. Yet you have not known Him, but I know Him. And if I say, “I do not know Him,” I shall be a liar like you; but I do know Him and keep His word. Your father Abraham rejoiced to see My day, and he saw it and was glad.’” John 8:54-56.

See what a powerful statement the Lord makes about His Father, “…of whom you say that He is your God.”

As you go through this book and add up the many statements similar to this one it becomes more and more apparent why it is said that the gospel of John represents Christ as God.

Again He says of them, “Yet you have not known Him…” For all the pomp and ceremony and outward trappings of a godly nation, they were dead inside, and did not know their God.

“Now as He drew near, He saw the city [Jerusalem] and wept over it, saying, ‘If you had known, even you, especially in this your day, the things that make for your peace! But now they are hidden from your eyes. For the days will come upon you when your enemies will build an embankment around you, surround you and close you in on every side, and level you, and your children within you, to the ground; and they will not leave in you one stone upon another, because you did not know the time of your visitation.,” Luke 19:41-44.

Jesus is speaking here of the future sacking of Jerusalem by Titus and the Roman legions in 70 A. D. The last phrase, “…the time of your visitation” is a reference to His incarnation and their rejection of Him.

Jesus would have to have been over 2100 years old to have seen Abraham. The answer to this question is quick and concise.

The words “I AM” are a unmistakable claim to being the YAWEH of the Old Testament, having been the exact same name that God gave to Moses in Exodus 3:14.

Now this is something that the Jews understood, and their response too was a quick one.

“Then they took up stones to throw at Him; but Jesus hid Himself and went out of the temple, going through the midst of them, and so passed by.” John 8:59.