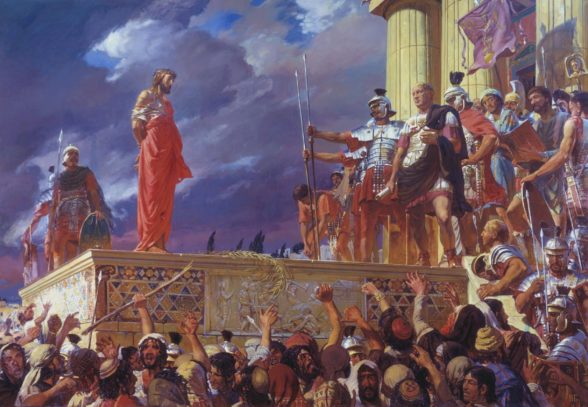 “But you have a custom that I should release someone to you at the Passover. Do you therefore want me to release to you the King of the Jews? Then they all cried again, saying, ‘Not this Man but Barabbas!’ Now Barabbas was a robber.” John 18:39-40.

These verses have been added for context. Barabbas, by the way, was not just a robber but an insurrectionist and a murderer.

“So then Pilate took Jesus and scourged Him. And the soldiers twisted a crown of thorns and put it on His head, and they put on Him a purple robe. Then they said, ‘Hail, King of the Jews!’ and they struck Him with their hands. Pilate then went out again, and said to them, ‘Behold, I am bringing Him out to you, that you may know that I find no fault in Him.’” John 19:1-4.

Scourging which has been explained before was a brutal thing. A whip similar to a cat o’ nine tails with fragments of bone, nails, or pieces of metal attached to the ends was used to flog the malefactor mercilessly, often ending in death.

The Romans used scourging to question suspects and as a prelude to crucifixion after the sentence was passed.

Roman citizens were exempt from this cruelty, see Acts 22:24-29; as they also were from crucifixion. And according to universal tradition the Apostle Paul, who was a Roman citizen, was finally martyred by being beheaded.

Scourging though, was supposed to be inflicted after sentencing; there is little or no indication that Jesus was sentenced to be crucified before He was scourged.

It is likely that Pilate had the Lord scourged before sentencing to elicit sympathy from the mob so that they might allow Him to go free.

The crown of thorns was obviously a mockery along with the robe; He was also given a reed as mock scepter, see Matthew 27:27-31. After kneeling before Him they took the reed and struck Him on the head with it and spat on Him.

These are truly cruel and degrading actions, I can only wonder if anyone else was scourged then treated in this manner.

Having done this cruelty to the Lord and Creator of everything, they led Him back out before the unruly mob.

“All things were made through Him, and without Him nothing was made that was made. In Him was life, and the life was the light of men” John 1:3-4.

As they brought Him forth, Pilate announced, “…I find no fault in Him.” It is not as though this crowd could not understand six little words; they simply did not care.

When Pilate took Jesus inside to scourge Him the Roman guard, chief priests and officers along with a huge crowd, which grew larger as time passed, stood outside.

It had to have taken time to bind the Lord whip Him and then mock Him; all the while people were milling about, murmuring and waiting patiently to make sure this Man was murdered by crucifixion.

And when He is brought out and they behold this pitiful sight of a Man, beaten, His beard ripped out, covered with blood, and a crown of thorns on His head.

“I gave My back to those who struck Me, and My cheeks to those who plucked out the beard; I did not hide My face from shame and spitting.” Isaiah 50:6.

“Just as many were astonished at you, so His visage was marred more than any man, and His form more than the sons of men…” Isaiah 52:14.

It is the chief priests and officers who start the cry to crucify Him. Never missing a beat, they whip the crowd into a frenzy such as only an unruly mob of demonized men are capable of.

Once again the Roman governor, Pilate declares to all, “I find no fault in Him.” As he has done from the beginning of this farce, Pilate tries to extricate himself from it; “You take Him and crucify Him…”

It is not likely that there was any Roman law that allowed the condemnation of an innocent man. Pilate was definitely between a rock and a hard place.

Still, if the truth were to reach Caesar’s ear that Pilate had defended and set free an innocent man, would he have been held at fault for the ensuing riot this time?

“The Jews answered him, ‘We have a law, and according to our law He ought to die, because He made Himself the Son of God.’ Therefore, when Pilate heard that saying, he was the more afraid, and went again into the Praetorium, and said to Jesus, ‘Where are You from?’ But Jesus gave him no answer. Then Pilate said to Him, ‘Are You not speaking to me? Do You not know that I have power to crucify You, and power to release You?’ Jesus answered, ‘You could have no power at all against Me unless it had been given you from above. Therefore the one who delivered Me to you has the greater sin.’” John 19:7-11.

Oops! The Jews almost overplayed their hand. It is possible that they had forgotten that the Romans had many gods, and many children of those gods, demigods.

It is quite likely that this is what jerked Pilate around and caused him to go back to question Jesus again.

If you are interested in the names of the gods and demigods of the Romans, punch that in on your computer, you may be truly frightened (or should be) by the number of folks who are in some kind of game world where they are gods or demigods.

Even grade-schoolers, are familiar with these things from cartoons and movies like “Clash of the Titans”. It will be no surprise then when the Antichrist makes his claim to being God; their minds have been made ready to accept him.

The Apostle Paul speaks of this man who will not be revealed until after the rapture of the church, read 2 Thessalonians 2:1-12.

“…[when the Antichrist] the man of sin is revealed, the son of perdition, who opposes and exalts himself above all that is called God or that is worshiped, so that he sits as God in the temple of God, showing himself that he is God.” 2 Thessalonians 2:3b-4.

This man will come with great signs and wonders so as to fool the very elect if possible see Matthew 24:21-30.

Finally, Pilate asks the question that no one had asked before, “Where are You from?” Unfortunately it is too little too late, and by the wrong person.

The Jews assumed that the Lord was born in Nazareth and never bothered to check up on their facts. Bethlehem, as the prophet wrote was the birthplace of the Christ and not just in a place but birthed by a virgin. No one asked His mother.

But Pilate already had been told that Jesus was of Galilee, that answers the question, but he wants to know, “Where are You from?”

Pilate’s fear and note that he is the more afraid, this whole mess has him rattled, and now he is afraid that he is persecuting the son of a god and retribution against him for such an act would be sudden and terrifying.

The ease with which Jesus could have walked, by saying, “Yes, I am the Son of the God of gods.” shows us His utter and fearless determination to live, and die in obedience to His Father.

Combine that with a simple act like healing a paper cut on Pilate’s hand and this trial would have been over.

“Let this mind be in you which was also in Christ Jesus, who being in the form of God, did not consider it robbery to be equal with God, but made Himself of no reputation, taking the form of a servant, and coming in the likeness of men. And being found in appearance as a man, He humbled Himself and became obedient to the point of death, even the death of the cross.” Philippians 2:5-8.

When the Lord did not answer Pilate’s question, the governor reminded Him that he had the power to crucify or release Him.

It would appear that Jesus’ answer to this, “You could have no power at all against Me unless it had been given you from above. Therefore the one who delivered Me to you has the greater sin.” was, in part, to calm his fear of reprisal from God.

The greater sinner was he who delivered Christ up for crucifixion. Whether this is a reference to Judas Iscariot who is called, “the son of perdition”, or to the high priests is unclear.

Even though there is some implied release for Pilate to continue, he still resists the Jews demands.

“From then on Pilate sought to release Him, but the Jews cried out, saying, ‘If you let this Man go, you are not Caesar’s friend. Whoever makes himself a king speaks against Caesar.’ When Pilate therefore heard that saying, he brought Jesus out and sat down in the judgment seat in a place that is called The Pavement, but in Hebrew, Gabbatha. Now it was the preparation Day of the Passover, and about the sixth hour. And he said to the Jews, “Behold your King!’ But they cried out, ‘Away with Him, away with Him! Crucify Him!’ Pilate said to them, ‘Shall I crucify your King?’ The chief priests answered, ‘We have no king but Caesar!’ So he delivered Him to them to be crucified. So they took Jesus and led Him away.” John 19:12-16.

The Jews are starting to get the hang of this and cry out that if he lets Jesus go he is no friend of Caesar, accusing him of treason really.

Pilate already realized that Jesus had no interest in politics and had no desire to oppose Caesar, making Him innocent of all charges; something that would be hard to prove if the Jews decided to bring him before Tiberius Caesar accusing him of treason.

In his efforts to release Jesus, Pilate had given the crowd a choice between a murderer and the Christ; he did this for a reason.

“For he knew that because of envy they [the religious leaders] had delivered Him.” Matthew 27:18.

Perhaps he thought that he could divert the crowd into sympathizing with Jesus, but the satanically energized priests had anticipated him and swayed the mob to ask for Barabbas.

Shortly before this Pilate’s wife had warned him about Jesus.

“While he was sitting on the judgment seat, his wife sent to him, saying, ‘Have nothing to do with that just Man, for I have suffered many things today in a dream because of Him.’” Matthew 27:19.

As a result of this accumulation of information and:

“When Pilate saw that he could not prevail at all, but rather that a tumult was rising, he took water and washed his hands before the multitude, saying, ‘I am innocent of the blood of this just Person. You see to it.’ And all the people answered and said, ‘His blood be on us and on our children.’” Matthew 27:24-25.

Washing your hands and proclaiming your innocence of a man’s blood does not absolve you of guilt if you have the means to save that person and do not.

Others have been unable to save someone from death and felt guilty when they do not need to. This is far different.

Pilate’s protestations and statements that Jesus was innocent made one thing glaringly clear; it is that the Jews were knowingly insisting on the death of a Man who did not deserve it.

And then they engaged in the profound stupidity of not only cursing themselves by calling out, “His blood be on us and on our children.” but their children as well, something they had no right to do.

The final insult to God after their rejection of His chosen Messiah was their proclamation of allegiance to Caesar.

“We have no king but Caesar!”