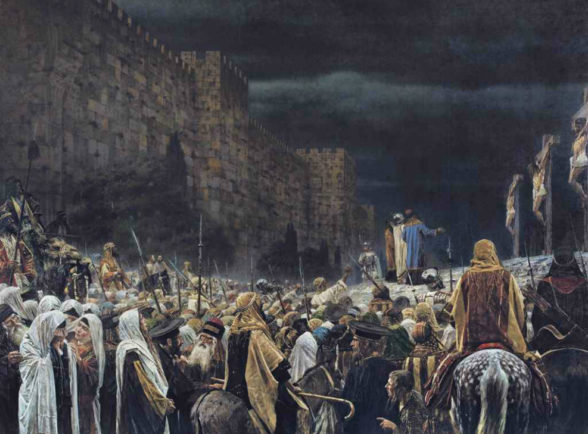 The name Mary was a popular one during this period in history; it is not mentioned at all in the Old Testament. One possible reason for this popularity is that Mary is a derivative of Miriam, the older sister of Moses and Aaron, who was called a prophetess, see Exodus 15:20.

The meaning of both of these names, Miriam and Mary is not very flattering; it is rebellion, or, their rebellion. Bible names are often meaningful.

For instance Miriam was named as a baby, as you might expect, but its full meaning was not revealed until years later when she and her brother Aaron (she being the instigator) rebelled against Moses, hence the meaning of her name “their rebellion”, see Numbers 12:1-15.

If we are to go by all the accounts in Scripture we will find that Mary the mother of Jesus was anything but rebellious, so she may have been named in honor of a relative.

There are six women named Mary in the New Testament, four of them are in the gospels, while the other two are named in, Acts 12:12 and Romans 16:6.

Three of these women are in this one verse above; Mary the mother of Jesus, Mary the wife of Clopas, and Mary Magdalene.

The words, “…Jesus His mother, and His mother’s sister, Mary the wife of…” gives the impression that the sister of the Lord’s mother was also named Mary.

Jesus’ statement, “Woman, behold your son!” is amazing when you consider that He was in such excruciating pain and yet He took this moment to give His mother to another son to care for her. And then gazing on the disciple John, He gives her into his care, “Behold your mother!”

Herein you see the obedience of the disciple, “And from that hour that disciple took her to his own home.” Caring for another in your home is a huge task; and there are many who are doing this or have done it.

The Lord Himself will thank you for your faithfulness when you stand before Him in glory, even if you do not reap some benefits from it now.

On the other hand, it is the task of the Christian guest in another person’s home to do all that is humanly possible to make their stay less burdensome.

It is the duty of both the host and the guest to show the love of God to one another. This can be done in part by showing generosity as a host and gratitude as a guest.

The scene we have before us in that Mary the mother of Jesus is standing near enough to His cross to hear His words, which even though we have exclamation marks ending His sentences, could not have been shouted very loudly due to the constriction caused by His position on the cross; His lungs would also be filling with fluid.

“I am poured out like water, and all My bones are out of joint; My heart is like wax; it has melted within Me. My strength is dried up like a potsherd, and My tongue clings to My jaws; You have brought Me to the dust of death.” Psalm 22:14-15.

As she stood so close to this pitiful sight His mother would unquestionably remember the words of Simeon spoken over thirty years earlier.

God had revealed to Simeon that he would not die before he saw the Lord’s Christ. Upon seeing Mary, Joseph and the baby Jesus, he prophesied over Christ and blessed them, saying this to Mary.

“Behold, this Child is destined for the fall and rising of many in Israel, and for a sign which will be spoken against (yes, a sword will pierce through your own soul also), that the thoughts of many hearts may be revealed.” Luke 2:34b-35.

“…a sword will pierce through your own soul also” what an appropriate description of a mother watching her child die a slow and excruciating death on a cross.

“After this, Jesus, knowing that all things were now accomplished, that the Scripture might be fulfilled, said, ‘I thirst!’” John 19:28.

Of the four gospels John’s gospel is the only one that does not mention the period of darkness that came over the land at noon and lasted until three that afternoon when the Lord yielded up His spirit with His cry, “It is finished!” Three hours of darkness left out of this account.

Matthew, Mark, and Luke are often called the synoptic gospels because they present a “common view” of the life of Christ. The word itself comes from the Greek word sunopsis, meaning, “a blended view”.

These three gospels present Christ to the reader as a, King, Servant, and a Man, respectively; as a result the subject matter, though shown from different perspectives, often overlaps; while John presents Christ as God the Son. As a result many things from the other gospels are left out and a whole lot of different information is given. There are variations in all three of the accounts of darkness; we will just take this one from the book of Luke.

“And it was about the sixth hour, and there was darkness over all the earth until the ninth hour. Then the sun was darkened, and the veil of the temple was torn in two. And when Jesus had cried out with a loud voice, He said, ‘Father, into Your hands I commend My spirit.’ And having said this, He breathed His last. Now when the centurion saw what had happened, he glorified God, saying, ‘Certainly this was a righteous Man!’ And the whole crowd who came together to that sight, seeing what had been done, beat their breasts and returned. But all His acquaintances, and the women who followed Him from Galilee, stood at a distance, watching these things.” Luke 23:44-49.

One curious thing is that it says that there was darkness over all the earth from noon to 3 p.m. It appears that the whole globe was darkened for three frightening hours not just Israel, though we cannot be dogmatic.

“After this, Jesus, knowing that all things were accomplished, that the Scripture might be fulfilled, said, ‘I thirst!’” John 19:28.

It is thought by many that Christ paid for the sin of the world during the entire time that He was on the cross.

The reality is that He endured all of the torment and evil inventions of man and demon from the moment of His arrest until the darkness came at noon.

“Then Jesus said to the chief priests, captains of the temple, and the elders who had come to Him, ‘Have you come out, as against a robber, with swords and clubs? When I was with you daily in the temple, you did not try to seize Me. But this is your hour, and the power of darkness.’” Luke 22:52-53.

But the payment for sin was a matter between the Father and His beloved Son, a matter that was conducted in darkness.

It was in the beginning of that awful darkness that Jesus cried out.

“My God, My God, why have You forsaken Me? Why are You so far from helping Me, and from the words of My groaning?” Psalm 22:1.

And it was in darkness that the full punishment for sin was meted out, and as the Passover lamb was completely consumed, so was the Lamb of God who took the full brunt of the wrath of God for all mankind, if they would only accept that sacrifice.

For this reason, Jesus knew “…that all things were now accomplished” and having suffered all these things He could now call out, “I thirst!”

“Now a vessel full of sour wine was sitting there; and they filled a sponge with sour wine, put it on hyssop, and put it to His mouth. So when Jesus had received the sour wine, He said, ‘It is finished!’ And bowing His head, He gave up His spirit.” John 19:29-30.

It is fitting that the last thing Christ received from man before His death is sour wine. For about two thousand years now men have reached out with the gospel of salvation in Christ, and received only the bitter taste of hatred and rejection.

We must all take the words, “It is finished!” to heart because they tell us that salvation is a complete work.

There is nothing that the Christian can do to add to it, nor is there anything that we can do to lose it, because all sin was taken care of as those words indicate, leaving nothing in our past, our present, or our future that is not covered by the blood of Christ.

“But this man, after He had offered one sacrifice for sins forever, sat down at the right hand of God…” Hebrews 10:12.

In fact, this sacrifice is so all sufficient that God sees the believer as pure in Christ.

“Therefore, because it was the Preparation Day, that the bodies should not remain on the cross on the Sabbath (for that Sabbath was a high day), the Jews asked Pilate that their legs might be broken, and that they might be taken away.” John 19:31.

Bear in mind that it is well after 3 p.m. and that the Sabbath starts in just hours at 6 p.m. (not midnight as we are used to thinking). So the bodies needed to be removed before 6 p.m. at which time it would become the Sabbath.

The bodies of Jesus and the other two men then, if left up after 6 p.m. would have profaned the Sabbath, which happened to be a “high day”.

The days on any calendar change from year to year. For instance, our Fourth of July falls on Thursday this year. Next year it will fall on Friday, and in 2012, it fell on Wednesday.

You know all this, but it illustrates what happens on a high day; every few years the first day of the Feast of Unleavened Bread began on a Sabbath making it a high day or festival.

Though the following references do not further explain the high day, they do give you more information on the Passover see, Exodus chapter 12 and Leviticus 23:4-8.

“Then the soldiers came and broke the legs of the first and of the other who was crucified with Him. But when they came to Jesus and saw that He was already dead, they did not break His legs. But one of the soldiers pierced His side with a spear, and immediately blood and water came out. And he who has seen has testified, and his testimony is true; and he knows that he is telling the truth, so that you may believe. For these things were done that the Scripture should be fulfilled, ‘Not one of His bones shall be broken.’ And again another Scripture says, ‘They shall look on Him whom they pierced.’” John 19:32-37.

When you read Exodus 12 you will see that the Passover lamb was to be completely consumed, none of the bones were to be broken, and anything left till morning was to be burned.

All of this is a picture of the Lamb of God who was to be completely consumed on the cross in His sacrifice for our sin. If we meditate on these things about Christ’s death, it can be seen that His death on a cross was far more horrific than any other.

“He shall see the travail of His soul, and be satisfied. By His knowledge My righteous Servant shall justify many, for He shall bear their iniquities. Therefore I will divide Him a portion with the great, and He shall divide the spoil with the strong, because He poured out His soul unto death, and He was numbered with the transgressors, and He bore the sin of many, and made intercession for the transgressors.” Isaiah 53:11-12.