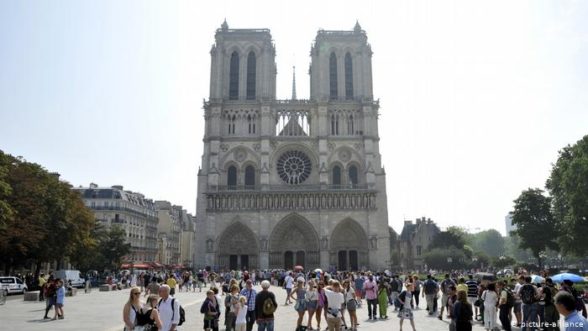 “…endeavoring to keep the unity of the Spirit in the bond of peace.” Ephesians 4:3.

“There is one body and one Spirit, just as you were called in one hope of your calling; one Lord, one faith, one baptism; one God and Father of all, who is above all, and through all, and in you all.” Ephesians 4:4-6.

Ephesians 4:3 has been added to help clarify what we will be discussing in verse 4 above.

Unity then, is very important to God. Not surprising, since disunity is Satan’s primary weapon used against the church, nations, races, families and individuals.

In the following quote you can see that Jesus is merely stating something that Satan was already well aware of.

Division is the method with which Satan has nearly destroyed the modern day church, division is the way in which he has done such damage in the church since its beginning. He is not about to stop now.

The most instructive thing about our study in Ephesians 4:4-6 (verses 5 and 6 to follow) is that these verses are all one sentence. You will notice that they are divided into three parts by two semicolons (;), it is these semicolons which separate the verses into what might be seen as three complete thoughts. Read on, this may become clear shortly.

“There is one body and one Spirit, just as you were called in one hope of your calling;” Ephesians 4:4.

For example, if the rapture of the church, the sudden removal of all true Christians from the earth, were to come on a Sunday during church service, true Christians would disappear, leaving many pseudo-Christians seated in their pews.

However, it is more than that to the Christian. The Christian church is actually compared to the human body in that it is supposed to function as one unit.

“For as the body is one and has many members, but all the members of that one body, being many, are one body, so also is Christ. For by one Spirit we were all baptized into one body – whether Jews or Greeks [Gentiles], whether slaves or free – and have all been made to drink into one Spirit. For in fact the body is not one member but many.” 1 Corinthians 12:12-14.

“For as we have many members in one body, but all the members do not have the same function, so we, being many, are one body in Christ, and individually members of one another.” Romans 12:4-5.

The church was always intended to function as a unit. This is not just an old impractical idea that has been discarded by church leaders; it is a doctrine which has been disrupted by Satan’s lies and the machinations of ungodly men.

“Beware of false prophets, who come to you in sheep’s clothing, but inwardly they are ravenous wolves.” Matthew 7:15.

“Beloved, while I was very diligent to write to you concerning our common salvation, I found it necessary to write to you exhorting you to contend earnestly for the faith which was once for all delivered to the saints. For certain men have crept in unnoticed, who long ago were marked out for this condemnation, ungodly men, who turn the grace of our God into lewdness and deny the only Lord God and our Lord Jesus Christ.” Jude 3-4.

That, in fact, is what has ruined the power of the body of Christ, people who think that this or that should be changed to fit our modern ways. Or those who convince church leadership that they are highly trained Christians, when in fact they are wolves in sheep’s clothing.

Who is qualified to change that? Only the ungodly and those who refuse to listen to the Holy Spirit are foolish enough to do so.

“Hypocrites! Well did Isaiah prophesy about you, saying: ‘These people draw near to Me with their mouth, and honor Me with their lips, but their heart is far from Me. And in vain they worship Me, teaching as doctrines the commandments of men.’” Matthew 15:7-9.

Just as we have seen that there is one body, so too there is only one Spirit.

“There is one body and one Spirit, just as you were called in one hope of your calling;” Ephesians 4:4.

It is the Holy Spirit that moves among the different members of the one body both to keep the body a unity and to lead each member to function in the manner that the head, Christ, desires. The Lord said the following to His disciples about the Holy Spirit. These words are for us too.

“However, when He, the Spirit of truth, has come, He will guide you into all truth; for He will not speak on His own authority, but whatever He hears He will speak; and He will tell you things to come. He will glorify Me, for He will take of what is Mine and declare it to you. All things that the Father has are Mine. Therefore I said that He will take of Mine and declare it to you.” John 16:13-15.

Every true Christian has the Holy Spirit dwelling in them. He is there for guidance, for comfort, wisdom, and we are sealed with the Spirit as a guarantee that we will assuredly be with Him in heaven in a little while.

“In Him you also trusted, after you heard the word of truth, the gospel of your salvation; in whom also, having believed, you were sealed with the Holy Spirit of promise, who is the guarantee of our inheritance until the redemption of the purchased possession, to the praise of His glory.” Ephesians 1:13-14.

“…you were called in one hope of your calling” our hope is to be with Jesus for eternity. This is not just a hope it might happen thing, it is a guaranteed hope having been irrevocably sealed with the Holy Spirit.

There is coming a glorious time when all of the body of Christ from every age will be gathered together in one place.

Finally seeing Jesus, God the Father and the Holy Spirit will be staggering enough, heaven breathtaking, and huge armies of angels as far as the eye can see unimaginable, those blood bought from all the ages, innumerable as the stars in the sky, will humble us, but to see the entire body of Christ from over two millennia will bring a smile to our faces that just will not go away.

All the miseries of this lifetime will vanish away like a wisp of smoke.

“But you have come to Mount Zion and to the city of the living God, the heavenly Jerusalem, to an innumerable company of angels, to the general assembly and church of the firstborn who are registered in heaven, to God the Judge of all, to the spirits of just men made perfect, to Jesus the Mediator of the new covenant, and to the blood of sprinkling that speaks better things than that of Abel.” Hebrews 12:22-24.

Every true Christian will see this with their own eyes one day soon.