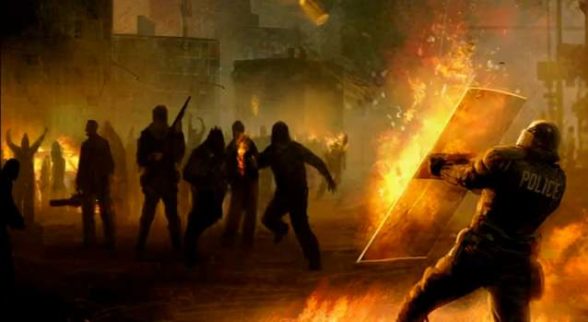 “Then God said, ‘Let Us [Father, Son, and Holy Spirit] make man in Our image, according to Our likeness; let them have dominion over the fish of the sea, over the birds of the air, and over the cattle, over all the earth and over every creeping thing that creeps on the earth.’ So God created man in His own Image; in the image of God He created him; male and female He created them.” Genesis 1:26-27.

“Let Us make man in Our image, according to Our likeness…” Genesis 1:26a.

I once asked a professor from a Bible college, if it was possible that God was speaking to the angels when He said, “Let Us make man in Our image”. His reply was, to paraphrase, “absolutely not, these are words spoken within the Godhead.”

This view is also shared by the translators of the New King James Bible, because they have capitalized the words “Us, Our, and His own Image”, indicating deity.

Man really is the pinnacle of the re-creation chronicled in these first verses from 3-27. It is the atheistic theory of evolution that has done the most to destroy the dignity of mankind.

It is and has always been true that the sin nature has blinded men to the things God has created for them and often in following his own way man has sunk to the level of a brute beast, but nothing has justified such behavior and devalued life as much as evolution which says that man is already an animal.

And the worst of animals because, unlike them, he continually wants to bring all of nature into subjugation to him, no matter how much damage he does. This has created a backlash in many circles.

How does the bumper sticker read? “Save a whale, be a hero, save a baby go to jail”?

There are many self-righteous sorts who have been completely taken over by evolution and have seen fit to infringe upon the right of others to believe what they want.

The end result of their thinking is that man is bad and the poor animals must be protected at all costs. This has led animal rights groups to try to get laws passed to give animals the same rights as humans.

The end result would be that men could no longer eat meat, because the animals have the same rights.

Eventually cities would be similar to places in India where half starved cows roam the streets, add to that, pigs, horses, cats, dogs, and various predators prowling about seeking food and shelter.

Thoughts of animals being equal to men have even entered the thinking of the common man. One person described the shooting of a dog by a policeman as murder.

The reason the policeman shot the dog was not given other than showing the animal as a victim of police brutality. This person described the killing as murder, generally the term is used to describe a homicide, so the word murder was used here to inflame the reader and humanize a dog.

This skewed thinking is spreading even more because schools are not allowing anything other than evolution to be taught.

As a result children grow up thinking that they are nothing but animals that are not even useful to nature because mankind is a blight upon the natural order. It is right to cruelly abort babies, and to defend the rights of animals over humans.

It is Satan’s lie that he does not exist. He not only exists, but he and his fallen angels will spend eternity in the lake of fire with everyone who believes his lies.

“You are of your father the devil, and the desires of your father you want to do. He was a murderer from the beginning, and does not stand in the truth, because there is no truth in him. When he speaks a lie, he speaks from his own resources, for he is a liar and the father of it.” John 8:44.

“Now the Spirit expressly says that in latter times some will depart from the faith, giving heed to deceiving spirits and doctrines of demons, speaking lies in hypocrisy, having their own conscience seared with a hot iron…” 1 Timothy 4:1-2.

It is easy to forget that doctrines of demons are not just, heresies, or religious things like idolatry, Spiritualism, necromancy, or witchcraft. Such seemingly non-religious doctrines such as atheism, communism, socialism, evolution, and the politically correct are also doctrines of demons.

This is evident because they are based on lies, they enslave rather than free, they create a tremendous disparity between the rich and the poor (Which is all that will be left. There will be no middle class).

Doctrines like the politically correct create their own anti-Biblical morality which is illegal to question. Robs people of their freedom of speech, dividing and creating animosity between people, whether ethnically, racially, or monetarily, by encouraging a have and have not mentality.

All of them have the end goal of subjecting the majority to a greedy and incompetent minority who create misery wherever they are in power.

And none of these make any allowance for the knowledge of the true God to be lifted up or taught about by anyone.

As a result they have, and are creating an evil hell-bound generation who have no mind of their own. These are brute beasts who are enslaved to their lower fleshly natures.

“Now the works of the flesh are evident, which are: adultery, fornication, uncleanness, licentiousness, idolatry, sorcery, hatred, contentions, jealousies, outbursts of wrath, selfish ambitions, dissensions, heresies, envy, murders, drunkenness, revelries, and the like; of which I tell you beforehand, just as I also told you in time past, that those who practice such things will not inherit the kingdom of God.” Galatians 5:19-21.

“But know this, that in the last days perilous times will come: For men will be lovers of themselves, lovers of money, boasters, proud, blasphemers, disobedient to parents, unthankful, unholy, unloving, unforgiving, slanderers, without self-control, brutal, despisers of good, traitors, headstrong, haughty, lovers of pleasure rather than lovers of God, having a form of godliness but denying its power. And from such people turn away! For of this sort are those who creep into households and make captives of gullible women loaded down with sins, led away by various lusts, always learning and never able to come to the knowledge of the truth. Now as Jannes and Jambres resisted Moses [see Exodus 7:11, 22], so do these also resist the truth: men of corrupt minds, disapproved concerning the faith; but they will progress no further, for their folly will be manifest to all, as theirs [Jannes and Jambres] also was.” 2 Timothy 3:1-9.

“I charge you therefore before God and the Lord Jesus Christ, who will judge the living and the dead at His appearing and His kingdom: Preach the word! Be ready in season and out of season. Convince, rebuke, exhort, with all longsuffering and teaching. For the time will come when they will not endure sound doctrine, but according to their own desires, because they have itching ears, they will heap up for themselves teachers; and they will turn their ears away from the truth, and be turned aside to fables. But you be watchful in all things, endure afflictions, do the work of an evangelist, fulfill your ministry.” 2 Timothy 4:1-5.

“I charge you therefore before God and the Lord Jesus Christ… fulfill your ministry.” 2 Timothy 4.