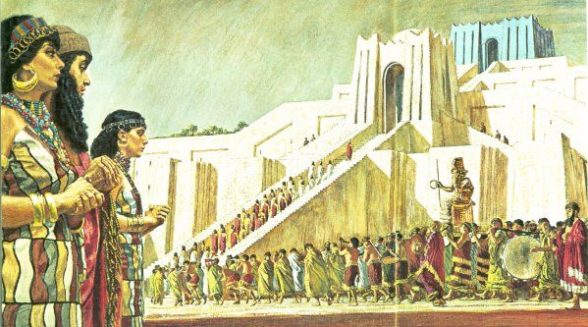 “Now the whole earth had one language and one speech. And it came to pass, as they journeyed from the east, that they found a plain in the land of Shinar, and they dwelt there. Then they said to one another, ‘Come, let us make bricks and bake them thoroughly.’ They had brick for stone, and they had asphalt for mortar. And they said, ‘Come, let us build ourselves a city, and a tower whose top is in the heavens; let us make a name for ourselves, lest we be scattered abroad over the face of the whole earth.’” Genesis 11:1-4.

The above passage is given to maintain context, we will continue with Genesis 11:5.

“But the Lord came down to see the city and the tower which the sons of men had built.” Genesis 11:5.

It is not that God had to come down to find out what was happening; He already knew that. This is worded in this manner to show that He gave serious consideration just as righteous men would do before passing judgment on the people and the city.

“For His eyes are on the ways of man, and He sees all his steps. There is no darkness nor shadow of death where the workers of iniquity may hide themselves. For He need not further consider a man, that he should go before God in judgment. He breaks in pieces mighty men without inquiry, and sets others in their place.” Job 34:21-24.

“And the Lord said, ‘Indeed the people are one and they all have one language, and this is what they begin to do; now nothing that they propose to do will be withheld from them. Come, let Us go down and there confuse their language, that they may not understand one another’s speech.’ So the Lord scattered them abroad from there over the face of all the earth, and they ceased building the city. Therefore its name is called Babel, because there the Lord confused the language of all the earth; and from there the Lord scattered them abroad over the face of all the earth.” Genesis 11:6-9.

Because of man’s obstinacy all of us have to suffer the curse of confusion and misunderstanding due to the different tongues in the world. If they had just dispersed as they were commanded to do how different the world would be today.

World commerce and the relationships between nations would be so much easier and with a greater degree of trust than we have today.

However, a unifying language apparently did not help the generations before the flood. In fact, in less than two thousand years the world was so corrupted God needed to destroy it to save it.

So the confusion of tongues has been a preserving factor in keeping the evil hearts of man from again destroying us.

There was a tremendous amount of technical knowledge that came through the flood waters with Noah and his sons.

It has been speculated that the knowledge of the pre-flood generations was at least equal to the Greeks – and I would go so far as to say equal to the Romans, and perhaps much greater.

Men living before the flood, especially in the earlier years, lived without disease, they had abundance of food, perfect weather, longevity of life, and because of their purer, disease free, and unimpaired DNA they had clearer minds and near perfect bodies.

Couple this with many years (or centuries) without war, and you have a civilization that made great advances in the various sciences of chemistry, metallurgy, building and farming to name some.

If left alone after the flood as a one language community it would have taken very little time to get back to where they were technically and morally before the flood.

It is quite possibly what the Lord had in mind when He said:

“Indeed the people are one and they all have one language, and this is what they begin to do; now nothing that they propose to do will be withheld from them.” Genesis 11:6.

When God did this, technology became survival and the things they knew of before the flood became myths and gods. Eden became hard earth that needed plowing to break up the clods and prayer for rain and not famine, harvest and bleak winters.

The times for frivolity were swept aside, and the need to invent was swallowed up by the need to survive. And the isolation of the gene pool brought national identity for Egyptians, Greeks, Israelites, Italians, Vikings, and the like.

“God, who made the world and everything in it, since He is Lord of heaven and earth, does not dwell in temples made with hands. Nor is He worshiped with men’s hands, as though He needed anything, since He gives to all life, breath, and all things. And He has made from one blood every nation of men to dwell on all the face of the earth, and has determined their preappointed times and the boundaries of their habitation, so that they should seek the Lord, in the hope that they might grope for Him and find Him, though He is not far from each one of us; for in Him we live and move and have our being, as also some of your own poets have said, ‘For we are also His offspring.’” Acts 17:24-28.

There is another reason why God confused the languages. If these men were allowed to continue to grow, not only would they have soon reached the same tipping point that doomed the creation before the flood, but they might have attempted to annihilate the godly line of Shem.

This godly line is important because it is the lineage of the Christ who was to come and fulfill the prophecy given to Adam and Eve.

This promise is that God would send Jesus into the world to pay the debt for sin, and at the same time defeat Satan, which He did at the cross.

Satan must have felt that God would deal with mankind in the same manner as He did with him and his followers. Satan and his rebellious angels were booted out of heaven with a thunderclap.

Once he recovered from shooting himself in the foot, Satan came up with a new game plan, he would destroy the godly line of Christ by polluting it with intercourse between angels and women, or by killing them, or as in the case of the flood by corrupting mankind.

But God has and always had since before time began, His plan and His will, and this will, will not be thwarted by an amateur like Satan.

“Look to Me, and be saved, all you ends of the earth! For I am God, and there is no other. I have sworn by Myself; the word has gone out of My mouth in righteousness, and shall not return, that to Me every knee shall bow, every tongue shall take an oath. He shall say, ‘Surely in the Lord I have righteousness and strength. To Him men shall come, and all shall be ashamed who are incensed against Him.’” Isaiah 45:22-24.

“Therefore God also has highly exalted Him [Jesus] and given Him the name which is above every name, that at the name of Jesus every knee should bow, of those in heaven, and of those on earth, and of those under the earth, and that every tongue should confess that Jesus Christ is Lord, to the glory of God the Father.” Philippians 2:9-11.

“…knowing this first: that scoffers will come in the last days, walking according to their own lusts, and saying, ‘Where is the promise of His coming? For since the fathers fell asleep, all things continue as they were from the beginning of creation.’ For this they willfully forget: that by the word of God the heavens were of old, and the earth standing out of water and in the water, by which the world that then existed perished, being flooded with water. But the heavens and the earth which now exist are kept in store by the same word, reserved for fire until the day of judgment and perdition of ungodly men.” 2 Peter 3:3-7.