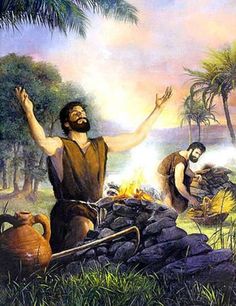 “Jude, a servant of Jesus Christ, and brother of James, to those who are called, sanctified by God the Father, and preserved in Jesus Christ: Mercy, peace, and love be multiplied to you. Beloved, while I was very diligent to write to you concerning our common salvation, I found it necessary to write to you exhorting you to contend earnestly for the faith which was once for all delivered to the saints. For certain men have crept in unnoticed, who long ago were marked out for this condemnation, ungodly men, who turn the grace of our God into licentiousness and deny the only Lord God and our Lord Jesus Christ.” Jude 1-4.

“But I want to remind you, though you once knew this, that the Lord, having saved the people out of the land of Egypt, afterward destroyed those who did not believe. And the angels [fallen angels, the, “sons of God” who may have had sex with women in Genesis 6: 1-4] who did not keep their proper domain, but left their own habitation, He has reserved in everlasting chains under darkness for the judgment of the great day; as Sodom and Gomorrah, and the cities around them in a similar manner to these, having given themselves over to sexual immorality and gone after strange flesh, are set forth as an example, suffering the vengeance of eternal fire.” Jude 5-7.

The fallen angels, who kept not their proper domain, had sex with the daughters of men in an attempt to pollute the human race, “having given themselves over to sexual immorality and gone after strange flesh.”

While homosexuality is highlighted in the Sodom and Gomorrah accounts, after seeing the pandemic of children openly being trained in school to be sex objects, child abductions and pedophilia going on today, revolting things which the sane mind would never even conceive, surely they were destroyed for these things too.

Both the sin of the fallen angels and those of the people of Sodom and Gomorrah are alike in that they were unnatural and destructive to those who committed them.

These illustrations show the inevitability of the punishment awaiting the heretics who defile Christ’s church and will suffer “the vengeance of eternal fire” in the lake of fire.

“Likewise also these dreamers defile the flesh, reject authority, and speak evil of dignitaries. Yet Michael the archangel, in contending with the devil, when he disputed about the body of Moses, dared not bring against him a reviling accusation, but said, ‘The Lord rebuke you!’ But these speak evil of whatever they do not know; and whatever they know naturally, like brute beasts, in these things they corrupt themselves.” Jude 8-10.

“Likewise”, that is to say, in the same manner as those described in verses 5-7, these do the same. And what is the substance of their arguments, dreams, they are “dreamers” and the reality of their philosophies and theologies is nothing more than a hot wind swirling up from the emptiness of a dead soul.

These ungodly dreamers also, defile, reject and speak evil of things they know nothing of.

“For many walk, of whom I have told you often, and now tell you even weeping, that they are the enemies of the cross of Christ: whose end is destruction, whose god is their belly, and whose glory is in their shame – who set their mind on earthly things.” Philippians 3:18-19.

Pay particular attention to Michael the archangel, if anyone deserves a good chewing out it is the devil, yet he says, “The Lord rebuke you!” This is not the whimper of a little nobody, Michael stands in the presence of God, yet he realizes that the devil is God’s problem and it is not up to him to correct the evil one.

Whether you are a Christian or not, this is good advice, be careful what you say or do around those in authority, if your mouth is shut, you cannot put your foot in it. Been there, done that, and I have paid dearly for it.

Yet man cannot become like an animal without debasing himself below the level of the beast for the animal has no moral sense but in becoming one, man shows himself to be immoral.

“Woe to them! For they have gone in the way of Cain, have run greedily in the error of Balaam for profit, and perished in the rebellion of Korah.” Jude 11.

These are the three driving ambitions of these heretics, they arrogantly make up their own religion, they profit from their trickery and they are rebellious against God.

Pride, greed and rebellion were behind the ungodliness of, Cain, Balaam and Korah.

“And in the process of time it came to pass that Cain brought an offering of the fruit of the ground to the Lord. Abel also brought of the firstlings of his flock and of their fat. And the Lord respected Abel and his offering [they both knew what the Lord required as an offering], but He did not respect Cain and his offering. And Cain was very angry, and his countenance fell.” Genesis 4:3-5.

In stiff-necked pride Cain offered God what he decided should be offered. If your boss told you to build a cabinet and you built a coffee table instead, because you felt like it, would it make you angry because he rejected it?

Since the greed of Balaam was examined earlier in Judah, Part 1, posted on 3-23-22 we will skip to Korah’s rebellion.

“They gathered together against Moses and Aaron, and said to them, ‘You take too much upon yourselves, for all the congregation is holy, every one of them, and the Lord is among them. Why then do you exalt yourselves above the congregation of the Lord?’” Numbers 16:3.

If you read the story of Moses and Aaron it is obvious that God had chosen them for the leadership posts that they occupied, yet Korah and the group he had gathered around himself felt that just anyone could have these jobs.

It really makes no sense, yet there they are, the ensuing death and chaos was a totally unnecessary horror and a blemish on the tribes in the wilderness, it did, however rid the nation of some rebels. For a more complete story see, Numbers chapters 16-17.

“These are spots in your love feasts, while they feast with you without fear, serving only themselves; they are clouds without water, carried about by the winds; late autumn trees without fruit, twice dead, pulled up by the roots; raging waves of the sea, foaming up their own shame; wandering stars for whom is reserved the blackness of darkness forever.” Jude 12-13.

“Clouds without water, carried about by the winds”, clouds have the promise of refreshing rain to satisfy the thirsty, but these are without water and satisfy no one. Even their teaching is unstable and it drifts about like so many clouds in the wind.

“…we should no longer be children, tossed to and fro and carried about with every wind of doctrine, by the trickery of men, in the cunning craftiness by which they lie in wait to deceive…” Ephesians 4:14.

Do not be fooled, men actually do “lie in wait to deceive”.

“Now Enoch, the seventh from Adam, prophesied about these men also, saying, ‘Behold, the Lord comes with ten thousands of His saints, to execute judgment on all, to convict all who are ungodly among them of all their ungodly deeds which they have committed in an ungodly way, and of all the harsh things which ungodly sinners have spoken against Him.’” Jude 14-15.

Enoch is mentioned in Genesis 5:19-24 and Hebrews 11:5-6 and the reference in the passage above is to Christ’s return after the tribulation.

“Then I saw heaven opened, and behold, a white horse. And He who sat on him was called Faithful and True, and in righteousness He judges and makes war. His eyes were like a flame of fire, and on His head were many crowns. He had a name written that no one knew except Himself. He was clothed with a robe dipped in blood, and His name is called The Word of God. And the armies in heaven, clothed in fine linen, white and clean, followed Him on white horses.” Revelation 19:11-14.

A day is coming when sin and evil will be dealt with, as sure as the flood and the destruction of Sodom and Gomorrah.

“These are murmurers, complainers, walking according to their own lusts; and they mouth great swelling [arrogant] words, flattering people to gain advantage.” Jude 16.

“A man who flatters his neighbor spreads a net for his feet.” Proverbs 29:5.

At this point Jude tells the Christian to be prepared mentally.

“But you, beloved, remember the words which were spoken before by the apostles of our Lord Jesus Christ: how they told you that there would be mockers in the last time who would walk according to their own ungodly lusts. These are sensual persons, who cause divisions, not having the Spirit.” Jude 17-19.

“But you, beloved, building yourselves up on your most holy faith, praying in the Holy Spirit…” Jude 20.

“…keep yourselves in the love of God, looking for the mercy of our Lord Jesus Christ unto eternal life.” Jude 21.

Be on the offensive.

“And on some have compassion, making a distinction; but others save with fear, pulling them out of the fire, hating even the garment defiled by the flesh.” Jude 22-23.

The closing verses are a benediction which needs no explanation, just believe it and claim it for yourself.

“Now to Him who is able to keep you from stumbling, and to present you faultless before the presence of His glory with exceeding joy, to God our Savior, who alone is wise, be glory and majesty, dominion and power, both now and forever. Amen.” Jude 24-25.

“…being confident of this very thing, that He who has begun a good work in you will complete it until the day of Jesus Christ…” Philippians 1:6.

“Now to Him who is able to do exceedingly abundantly above all that we ask or think, according to the power that works in us, to Him be glory in the church by Christ Jesus to all generations, forever and ever. Amen.” Ephesians 3:20-21.