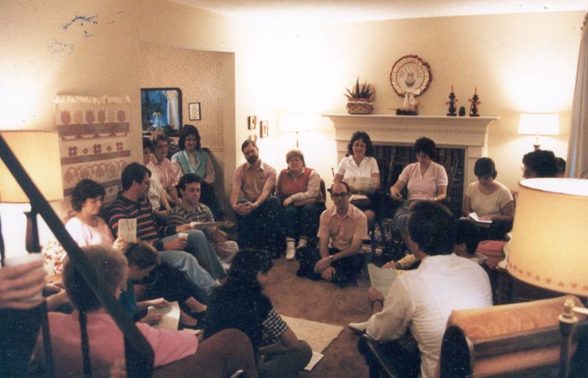 “And to the angel of the church in Philadelphia write, ‘These things says He who is holy, He who is true, He who has the key of David, He who opens and no one shuts, and shuts and no one opens…’” Revelation 3:7.

The name Philadelphia means brotherly love and after a period of about 1400 years of church history it is a breath of fresh air. The city itself was built in 189 B.C. by King Eumenes II, who for the love of his brother, Attalus II Philadelphus, named it after him.

Destroyed by a number of earthquakes over the years, the most notable of which occurred in 17 A.D. the city was quickly rebuilt with the help of Roman Emperor Tiberius.

Philadelphia was noted for its fine wine, so fine in fact the Roman poet Virgil commended it. The city still exists and is known by the name of Alashehir.

The time frame for the church of Philadelphia was approximately from 1750-1925 A.D. this church still exists, though to a lesser degree of influence today, as we will soon see.

As noted in Revelation 3:1-6 posted on 5-5-22 and 5-8-22, the Reformation started off well but began to implode within just a few years of its successes when state churches began to be established.

Because of this, unsaved persons began to get the impression that they were going to heaven because they had joined the church. The gospel could be heard in these churches but it soon became a dead formality, when ungodly men were given positions of authority in church hierarchy.

And many, especially in the Anglican churches, began to preach Deism, a demonic teaching which came out of Rationalism.

To put it simply it teaches that God created everything, wound up the clock, so to speak, and either went off to occupy Himself with other things, or He simply does not interfere with the affairs of men.

“Where can I go from Your Spirit? Or where can I flee from Your presence? If I ascend into heaven, You are there; if I make my bed in hell [Sheol, grave, place of the dead], behold, You are there. If I take the wings of the morning, and dwell in the uttermost parts of the sea, even there Your hand shall lead me, and your right hand shall hold me.” Psalm 139:7-10.

The error of Deism and the inarticulate, boring sermons given half-heartedly by a clergy who were interested only in their own lives and the comfort thereof caused church attendance to drop off.

Who in their right mind would want to sit on a hard pew for an hour or more listening to a sermon containing nothing but wind? A dart game at the local pub would be far more entertaining.

It is also true that Sunday was the only day off from work for most folks. Why spend Sunday listening to pallid godspeak drivel?

As a result godlessness, loose morals, gambling and drunkenness became a way of life throughout Europe and to a lesser degree in America (though the problem here was beginning to worsen).

This began to change when one, Philipp Spener, 1635-1705, of Germany became concerned with the spiritual coldness and lack of moral consciousness in that country began a weekly Bible study, prayer, discussion group in his home.

Though this generated some heat from the church establishment in Germany, the idea began to spread throughout the land then eventually throughout Europe.

This group was given the derisive name Pietists, the name stuck and so did the movement, causing an increase in evangelism, missionary work and increased influence throughout the world.

John Wesley preached for 65 years and rode an estimated 250,000 miles on horseback to different locations to preach an estimated 42,000 sermons.

No roadies, no microphones, no stages and chairs. They were denied access to the churches for their preaching by an entrenched clergy and so had to preach in the open; which was a good thing because the churches could not contain the huge crowds that gathered to hear them.

Moreover they were stoned by rock throwing crowds and met with problems with unsympathetic officials. These guys were serious.

George Whitefield preached some 18,000 sermons over span of 34 years to over 10,000,000 people sometimes as many as 20,000 at a time. He preached not in England alone but he also came to America and became very instrumental in our revival too.

The Wesley brothers were also the beginnings of the Methodist church. Another man, a Christian English statesman, William Wilberforce helped to change the manners in English society from one of drunken immorality to one of kindness, generosity and a sense of duty.

By his efforts slave trade was banned in 1807 and it was abolished altogether empire wide in 1833.

It was Jonathan Edwards, 1703-1758, whose powerful preaching of the truth of salvation through Christ shed blood, began the Great Awakening in America.

He became disturbed by the lack of the preaching of the gospel in this country and by the common knowledge that some ministers in the New England churches were unconverted.

New England’s problem was not moral decay for their Puritan beginnings still influenced their actions; however focus had shifted from religion to the things of this world.

The Christian work ethic still prevailed and as a result of their hard work they were well off. In fact due to the Puritan work ethic, there were no poor in New England!

Deism made some inroads into this country but it never really caught on. The people who founded this country were committed Christian believers and not Deist as the revisionist historians and propagandist claim. Do not believe this slander against our founding fathers.

About 1857 there was what is known as the Second Great Awakening. This was begun by a man who got saved while reading Bible verses quoted in the law books he used while studying to be a lawyer.

The conversion was powerful and complete, Charles G. Finney, 1792-1875, was responsible for the salvation of some 500,000 souls during his ministry, both here and in England.

D.L. Moody, 1837-1899, also preached to great crowds in America and Great Britain; and did much to bring this country back to one nation under God.

“These things says He who is holy, He who is true…” Revelation 3:7a.

Jesus is holy, this is an easy thing to just glance over but it is much more complicated than that.

Holy is not done justice in the dictionary as it concerns God. The holiness of God is a nature that is entirely against and devoid of evil, and it is absolute moral perfection without spot and without blemish, unchanging forever.

God said this of the sins of Judah.

“…they have also built the high places of Baal, to burn their sons with fire for burnt offerings to Baal, which I did not command or speak, nor did it come into My mind.” Jeremiah 19:5.

So holy is God that He can say that such evil did not come into His mind. Here is One who is so separated from evil that even though He is omniscient He does not have evil come to mind.

Jesus was the same. He lived with us and yet evil would not cross His mind, all the lusts and filthiness that we live with on a daily basis did not enter His mind, not because He had to force Himself to look away, but because it was not in His nature, He is God the Son.

“For such a High Priest was fitting for us, who is holy, harmless, undefiled, separate from sinners, and has become higher than the heavens; who does not need daily, as those high priests, to offer up sacrifices, first for His own sins and then for the people’s, for this He did once for all when He offered up Himself.” Hebrews 7:26-27.

This is an infinite holiness higher than the angels and so remote from us that it has to be imputed to us by God Himself for we cannot possibly work for that which was purchased by the blood of Christ. Do you see why you cannot work your way to heaven?

Yet many easily work their way to hell. In California they are trying to pass a law to extend abortion rights up to 28 days after birth. So if one tires of this cute wiggly little person because they are an inconvenience the state will kill your child for you, see AB 2223.

Christ calls Himself, “He who is true” Revelation 3:7b, referring to Himself as real, genuine, authentic, the true Christ.

“And we know that the Son of God has come and has given us an understanding, that we may know Him who is true; and we are in Him who is true, in His Son Jesus Christ. This is the true God and eternal life.” 1 John 5:20.

“He who has the key of David, He who opens and no one shuts, and shuts and no one opens.” Revelation 3:7c.

This verse is almost a direct quote from Isaiah 22.

The context of this verse is that a man named Shebna was steward over the house of King Hezekiah, his duties included ministry of the domestic affairs of the king.

However he was very worldly and during a siege by the Assyrians he fortified the city and promoted an attitude among the people of “…Let us eat and drink for tomorrow we die” Isaiah 22:13, rather than one of seeking the Lord’s protection. For this his position was taken from him by God and given to a godly man named Eliakim.

So the “key of the house of David” is a position of authority and this man Eliakim is a picture of the greater Son of David, Jesus who now holds this key.

“Behold, the days are coming,” says the Lord, “that I will raise to David a Branch [Jesus] of righteousness; a King [Christ] shall reign and prosper, and execute judgment and righteousness in the earth. In His days Judah will be saved, and Israel will dwell safely; now this is His name by which He will be called: THE LORD OUR RIGHTEOUSNESS.” Jeremiah 23:5-6.

This is the title of the one who holds “the key of David”. This passage not only speaks of His first advent, His incarnation, but also of His second advent when He comes to earth to reign during the millennium and forever.

There can be no debate about His ability to open and no one shuts and shut and no one opens. The Lord is sovereign whether it is apparent to us or not.

“And there is no other God besides Me, a just God and a Savior; there is none besides Me. Look to Me, and be saved, all you ends of the earth! For I am God, and there is no other. I have sworn by Myself; the word has gone out of My mouth in righteousness, and shall not return, that to Me every knee shall bow, every tongue shall take an oath.” Isaiah 45:21b-23.