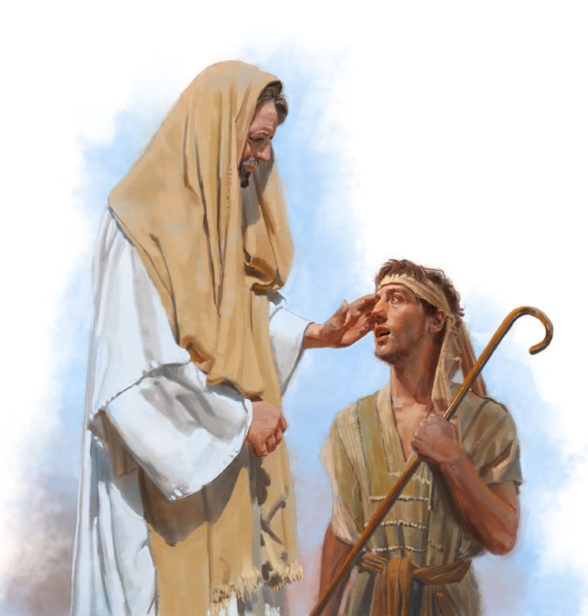 “And His disciples asked Him, saying, ‘Rabbi, who sinned, this man or his parents, that he was born blind?’” John 9:2.

“Jesus answered, ‘Neither this man nor his parents sinned, but that the works of God should be revealed in him. I must work the works of Him who sent Me while it is day; the night is coming when no one can work. As long as I am in the world, I am the light of the world.’” John 9:3-5.

All things both bad and good will reveal the works of God. Though it seems impossible, we will see this with our own eyes at the end of time, if not sooner.

Sooner, if we look for the work of God in all things, even if that work involves letting man spin out of control as he is doing today asserting his own godless will.

“Great peace have those who love Your law, and nothing causes them to stumble.” Psalm 119:165.

Jesus’ words, “…that the works of God should be revealed in him [the blind man]” have an immediate meaning too. It is a reference to the works that God the Father gave Christ to do before time began.

This is why He added the words, “I must work the works of Him who sent Me while it is day; the night is coming when no one can work.” In other words, while I am alive I do the tasks that the Father has given Me to do.

The night that is coming is Satan’s hour, the hour in which the Lord will be taken and crucified. This particular work which the Lord is doing, healing the blind man, is also the sixth of the seven signs in this gospel.

We too have a similar purpose if we choose to do them.

“For we are His workmanship, created in Christ Jesus for good works, which God prepared beforehand that we should walk in them.” Ephesians 2:10.

We are neither purposeless blobs of goo out of some primordial swamp nor are we spectators in life; we are, rather, destined to fulfill the works of God given to us before time began.

Even the godless have a purpose waiting for them, if they will accept Christ as their savior. In Christ their lives will be an example of how God can take even the worst of sinners and give them a glorious future.

Or if they reject Him, they will be an example of how God can circumvent the evil machinations of even the vilest of God haters.

I might add that every Christian starts out in the same manner, as hell bound sinners whose destination was the same – the lake of fire.

Mark this well, there is no individual or group (atheist, homosexual etc.) of mankind destined to hell. Without the sacrifice of Christ on the cross, everyone was doomed to hell! God the Father gave Jesus His Son as a sacrifice for all who will accept it for their own.

Again, the Lord repeats that phrase, “I am the light of the world” John 8:12.

And why is He the light of the world? It is because He reveals God the Father to the world.

“…I speak to the world those things which I heard from Him” John 8:26b.

The world had become, and is spiritually dark and had perverted the things which revealed God to men, including the twisting of Scripture by godless men like the Pharisees.

Jesus was, and is today, that bright light which reveals God to all men as He really is, by His Spirit and through His word.

This latest flash of light will enlighten at least one man and will reveal the extreme darkness of others who should know better.

“When He had said these things, He spat on the ground and made clay with the saliva; and He anointed the eyes of the blind man with the clay. And He said to him, ‘Go wash in the pool of Siloam’ (which is translated, Sent). So he went and washed, and came back seeing.” John 9:6-7.

Many folks make the mistake of trying to assign a reason for Christ’s making clay with saliva or odd things like the following.

“Then they brought to Him one who was deaf and had an impediment in his speech, and they begged Him to put His hand on him. And He took him aside from the multitude, and put His fingers in his ears, and He spat and touched his tongue. Then, looking up to heaven, He sighed, and said to him, ‘Ephphatha,’ that is, ‘Be opened.’ Immediately his ears were opened, and the impediment of his tongue was loosed, and he spoke plainly.” Mark 7:32-35.

“Then He came to Bethsaida; and they brought a blind man to Him, and begged Him to touch him. So He took the blind man by the hand and led him out of the town. And when He had spit on his eyes and put His hands on him, He asked him if he saw anything. And he looked up and said, ‘I see men like trees, walking.’ Then He put His hands on his eyes again and made him look up. And he was restored and saw everyone clearly.” Mark 8:22-25.

Returning to the clay, saliva statement in our study, many people try to look for some natural reason for making clay. It has been said that the clay was to change into the missing or incomplete eyeball.

Theories like this are interesting, but sometimes they cause us to miss the point of the lesson or of the whole chapter.

Jesus did not do anything for nothing. There is a natural or symbolic reason for all of these things, so they can be found out, but I do not want the new Christian spending all of their time trying to figure things out that do not add to the intention of the narrative.

Jesus’ day began with His convicting the men who brought the woman accused of adultery before Him, causing them to leave her and walk away.

It was the light of Christ that shone into those men’s hearts and showed them their own sinful condition.

Here in chapter 9 we now see that no matter how bright that light, men still willfully reject it, while others will begin to see.

As we progress you will see how the spiritual blindness is washed off of this blind man’s heart by the flowing water of the Holy Spirit, which is what this pool represents.

In a reference to the pool of Siloam from which water was poured out during the Feast of Tabernacles, the Lord said the following.

“On the last day, that great day of the feast, Jesus stood and cried out, saying, ‘If anyone thirsts, let him come to Me and drink. He who believes in Me, as the Scripture has said, out of his heart will flow rivers of living water.’ But this He spoke concerning the Spirit, whom those believing in Him would receive; for the Holy Spirit was not yet given, because Jesus was not yet glorified.” John 7:37-39.

The actions of the Holy Spirit are such as the following.

“As for you, my son Solomon, know the God of your father, and serve Him with a loyal heart and with a willing mind; for the Lord searches all hearts and understands all the intent of the thoughts. If you seek Him, He will be found by you; but if you forsake Him, He will cast you off forever.” 1 Chronicles 28:9.

“I, the Lord, search the heart, I test the mind, even to give every man according to his ways, and according to the fruit of his doings.” Jeremiah 17:10.

“Where can I go from Your Spirit? Or where can I flee from Your presence? If I ascend into heaven, You are there; if I make my bed in hell, behold, You are there. If I take the wings of the morning, and dwell in the uttermost parts of the sea, even there Your hand shall lead me, and Your right hand shall hold me. If I say, ‘Surely, the darkness shall fall on me,’ even the night shall be light about me; indeed, the darkness shall not hide from You, but the night shines as the day; the darkness and the light are both alike to You.” Psalm 139:7-12.

There is nothing too difficult for the Holy Spirit, but He will not force anyone to accept Christ as their savior; that task belongs to the individual alone.

So then after washing and receiving his sight he returned to his original location, but Jesus had gone on to another place. It would appear that the man now had to come to his own conclusions about Christ.