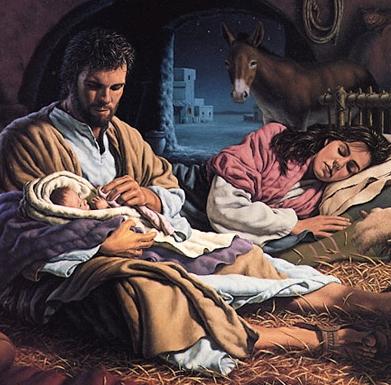 “Now a great sign appeared in heaven: a woman clothed with the sun, with the moon under her feet, and on her head a garland of twelve stars. Then being with child, she cried out in labor and in pain to give birth.” Revelation 12:1-2.

The opening line specifically calls this a sign, so this is not a literal woman. This sign appears in heaven and not the sky, so it is not an earthly spectacle.

It actually takes place in heaven beyond the sky where the writer, the Apostle John is seeing these visions, so no earthly eyes will see what he is seeing.

“After these things I [John] looked, and behold, a door standing open in heaven. And the first voice which I heard was like a trumpet speaking with me, saying, ‘Come up here, and I will show you things which must take place after this.’ Immediately I was in the Spirit; and behold, a throne set in heaven, and One sat on the throne.” Revelation 4:1-2.

So, who is the woman? Not surprisingly, the Catholic Church sees her as the Virgin Mary, but as you read the full passage it will become obvious that it is not she.

Mary Baker Eddy the founder of Christian Science stated that she was the woman giving birth to Christian Science. To paraphrase Mrs. Eddy’s statement that, “The blood of Christ had no more value when spilled on the cross than it had while coursing through His veins”, pretty much invalidates her claims to any legitimacy as a true Christian.

Some conservative commentators have said that the woman is the church. However the church did not give birth to Christ, rather Christ brought forth the church.

Others have said that this is all believers from the time of Adam and Eve to the call of Abraham and onward to the birth of Christ. Close, but it really ignores too many prophecies in the Scriptures.

The Bible is often its own interpreter, so the best thing is to go to Scripture for some hint of what is going on here.

“Then he [Joseph] dreamed still another dream and told it to his brothers, and said, ‘Look, I have dreamed another dream. And this time, the sun, the moon, and the eleven stars bowed down to me.’ So he told it to his father and his brothers; and his father rebuked him and said to him, ‘What is this dream that you have dreamed? Shall your mother and I and your brothers indeed come to bow down to the earth before you?’” Genesis 37:9-10.

We have good imagery here and the similarities are enough to draw some real conclusions from. Not to mention the fact that this dream is already interpreted by Joseph’s father Jacob.

Jacob, as the father of the twelve tribes of Israel and grandson of Abraham, easily represents the nation of Israel.

If you consider Joseph as one of the stars of Israel the number of stars comes to twelve, exactly the same as in the garland of stars on the woman which connects her with them.

If Jacob is representative of Israel (Jacob’s name was changed to, Israel, Genesis 32:24-32), then it is not too much of a stretch to see a woman giving birth as a picture of the nation of Israel.

If we accept the woman as representing the nation of Israel then the picture of her being clothed with the sun becomes a little clearer when you consider the following.

“For your [Israel’s] Maker is your husband, the Lord of hosts is His name; and your Redeemer is the Holy One of Israel; He is called the God of the whole earth.” Isaiah 54:5.

The sun which clothes this woman is the glory of the “God of the whole earth”.

The moon under her feet here is a little more difficult to interpret precisely, but the moon is a reflector and has no light of its own, it all comes from the sun.

This is the light that both Israelites and Christians are called to show, the reflection of the face of God in Christ in our own lives.

Israel as the woman is further augmented by Theodore H. Epp in his “Practical Studies in Revelation” published by Back to the Bible Broadcast.

The words, being, in labor (travailing), and pain, are all present tense in the Greek, indicating a continuous action. By this we see that the nation of Israel was continually with child, and continually in labor and pain to give birth to the Messiah.

Many women longed to give birth to the Christ; and many, though they had not given birth to Him, are honored grandmothers in His lineage. This is why the Virgin Mary could say the following.

“… My soul magnifies the Lord, and my spirit has rejoiced in God my Savior. For He has regarded the lowly state of His maidservant; for behold, henceforth all generations will call me blessed.” Luke 1:46-48.

Later in the chapter we will see the woman flee into the wilderness where she is fed for a time and times and a half time, something that Mary did not do, nor the church for that matter.

That this is Israel is further shown by the last verse in chapter 11.

“Then the temple of God was opened in heaven, and the ark of His covenant was seen in His temple. And there were lightnings, noises, thunderings, an earthquake, and great hail.” Revelation 11:19.

The temple and particularly the Ark of the Covenant are singularly of Israel, not Gentile. This is further indication that God is dealing with His people Israel here in Revelation chapter 12.

One thing that many writers seem to omit, though I believe that they would agree, is this; the Israel that this woman represents is the Israel of faith, not unbelieving Israel, there is a difference.

Throughout the history of Israel the people have either accepted the word of God by faith as their father Abraham did, or they have not.

“For what does the Scripture say? ‘Abraham believed God, and it was accounted to him for righteousness.’” Romans 4:3.

“For the promise that he would be the heir of the world was not to Abraham or to his seed through the law, but through the righteousness of faith.” Romans 4:13.

Unbelieving Israel has attempted to establish a righteousness of their own by following the law. Yet this cannot be done because the law is impossible to keep, so they do what they can and establish their own values of righteousness based loosely on the law.

Others rebelled outright and plunged headlong into idolatry which led them into bondage to every kind of vile passion, cult prostitution, human sacrifice, perverse sexual conduct, demonic mystery rituals, and murder.

These wicked things are called by different names in America today but they are done openly in many places and are all pervasive within our government and media. This is why America is suffering today.

Still in the midst of this when it seemed it could get no worse and Elijah cried out:

“I have been very zealous for the Lord God of hosts; for the children of Israel have forsaken Your covenant, torn down Your altars, and killed Your prophets with the sword. I alone am left; and they seek to take my life.” I Kings 19:10.

God’s reply was this:

“Yet I have reserved seven thousand in Israel, all whose knees have not bowed to Baal, and every mouth that has not kissed him.” I Kings 19:18.

There have always been a people within Israel who look for the kingdom of God on earth no matter how bad it became it is this Israel that the woman represents.