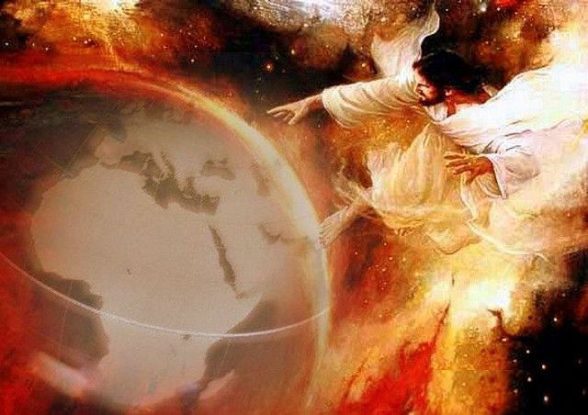 “The Lord reigns; let the earth rejoice; let the multitude of isles be glad! Clouds and darkness surround Him; righteousness and justice are the foundation of His throne.” Psalm 97:1-2.

The above is retained for context. This post will be concerned with the rest of Psalm 97:3-12.

At this time the seven year period of the tribulation are coming to an end, the earth is cloaked in darkness and the armies of the world who are with the Beast have gathered in Israel to destroy her once and for all.

This godless army will have wreaked havoc on Israel and the nation will suffer greatly by the time of the Lord’s return. However, return He will, and suddenly the dark sky will be torn apart and the glory of the Lord will shine into the darkness.

“For as the lightning comes from the east and flashes to the west, so also will the coming of the Son of Man be. For wherever the carcass is, there the eagles [vultures] will be gathered together.” Matthew 24:27-28.

“Then I saw an angel standing in the sun; and he cried with a loud voice, saying to all the birds that fly in the midst of heaven, ‘Come and gather together for the supper of the great God, that you may eat the flesh of kings, the flesh of captains, the flesh of mighty men, the flesh of horses and of those who sit on them, and the flesh of all people, free and slave, both small and great.’” Revelation 19:17-18.

The irresistible onslaught of the Lord Jesus Christ will consist of a fire going before Him, lightnings which light up the world, the earth sees and trembles; men and the earth tremble, the earth quakes and the mountains fall flat as is they were melting.

“Then the seventh angel poured out his bowl into the air, and a loud voice came out of the temple of heaven, from the throne, saying, ‘It is done!’ And there were noises and thunderings and lightnings; and there was a great earthquake, such a mighty and great earthquake as had not occurred since men were on the earth. Now the great city [Jerusalem] was divided into three parts, and the cities of the nations fell. And great Babylon [Revelation 18] was remembered before God, to give her the cup of the wine of the fierceness of His wrath. Then every island fled away, and the mountains were not found. And great hail from heaven fell upon men, each hailstone about the weight of a talent. Men blasphemed God because of the plague of the hail, since that plague was exceedingly great.” Revelation 16:17-21.

Then both the godless and those who accepted Christ during the tribulation will see the majesty and power of the Lord as He destroys all the wicked who destroy the earth.

“The heavens declare His righteousness, and all the peoples see His glory.” Psalm 97:6.

“…since it is a righteous thing with God to repay with tribulation those who trouble you, and to give you who are troubled rest with us when the Lord Jesus is revealed from heaven with His mighty angels, in flaming fire taking vengeance on those who do not know God, and on those who do not obey the gospel of our Lord Jesus Christ. These shall be punished with everlasting destruction from the presence of the Lord and from the glory of His power, when He comes, in that Day, to be glorified in His saints and to be admired among all those who believe, because our testimony among you was believed.” 2 Thessalonians 1:6-10.

There is coming a day when all false religions will cease to exist and those who serve them will be put to shame when they see their emptiness before the God of all creation.

“Let all be put to shame who serve carved images, who boast of idols. Worship Him, all you gods. Zion hears and is glad, and the daughters of Judah rejoice because of Your judgments, O Lord. For You, Lord, are most high above all the earth; You are exalted far above all gods.” Psalm 97:7-9.

Every knee includes Satan and all the demons who are the power behind lifeless idols and cults.

Even though Israel hears and is glad at the end of all false religion, they will first mourn for their rejection of the Messiah whom they will recognize when He finally comes in power and great glory to rescue them from certain destruction at the hand of the Antichrist.

“It shall be in that day that I will seek to destroy all the nations that come against Jerusalem. And I will pour on the house of David and on the inhabitants of Jerusalem the Spirit of grace and supplication; then they will look on Me whom they have pierced [crucified, John 19:37]; they will mourn for Him as one mourns for his only son, and grieve for Him as one grieves for a firstborn. In that day there shall be a great mourning in Jerusalem, like the mourning at Hadad Rimmon in the plain of Megiddo.” Zechariah 12:9-11.

“Behold, He is coming with clouds, and every eye will see Him, even they who pierced Him. And all the tribes of the earth will mourn because of Him. Even so, Amen.” Revelation 1:7.

All Scripture is relevant whether it was read in the times it was written, whether it is read by you and I today or tomorrow.

Even if it is read during the tribulation in a cave somewhere by someone hiding from roving gangs of murderers or the Antichrist, it is relevant.

Everything Scripture tells us is important even in the glorious, peaceful millennium which follows the tribulation, Scripture will be relevant.

“You who love the Lord, hate evil! He preserves the souls of His saints; He delivers them out of the hand of the wicked.” Psalm 97:10.

These words seem out of place do they not? Yet they are very relevant to the Christian. Christians absolutely must hate evil!

However, experience shows us that this is not true is it?

I believe that the majority of us hate most evil but there are some that we merely dislike, and at times we even indulge in others.

The reason I am so dogmatic in this statement is that I too struggle along with so many of my brothers and sisters to hate all evil!

This is nearly an impossible task to hate evil because so much of it appeals to our flesh. Some of the things which appeal to the flesh are: adultery, fornication, hatred, jealousy, and envy. See Galatians 5:16-21 for a full list.

This is why we must cling to Jesus and confess our sins when we recognize them.

If we confess our sins and forsake them, and we may have to forsake them numerous times before we are free of them, we must never allow Satan to tell us that God is done with us and our constant sinning. Satan is a liar and has nothing to do with our relationship with God in Christ.

Let us not forget though that there is a promise, if we hate evil we will be preserved before our enemies and delivered out of the hand of the wicked.

Never be too embarrassed or ashamed to come to God and confess your sin no matter how often you fall.

The humble and contrite heart cannot exhaust the grace of God. It is only by sincere recognition and confession that the Holy Spirit can make real change in your heart.

This exhortation to hate evil is also put here for another reason. This psalm is about the return of Christ to end all of the evil that man has indulged himself in throughout history and specifically during the tribulation when lawlessness is pandemic.

The words “You who love the Lord, hate evil!” is a warning to those living during the tribulation. And those who read this at that time are told that if they want to be preserved, they are not to give in to the evil desires that surround them.

The tribulation will seem to drag on forever and the return of Christ as promised will seem so far away, many Christians in that period will just give up. Jesus said this about those days:

“And because lawlessness will abound, the love of many will grow cold. But he who endures to the end shall be saved [preserved].” Matthew 24:12-13.

This warning to tribulation Christians is repeated in a different way at the end of the tribulation when the sixth bowl of judgment is poured out, setting the stage for the battle of Armageddon.

“Behold, I am coming as a thief. Blessed is he who watches, and keeps his garments, lest he walk naked and they see his shame.” Revelation 16:15.

“You who love the Lord, hate evil! He preserves the souls of His saints; He delivers them out of the hand of the wicked. Light [understanding and wisdom] is sown for the righteous, and gladness for the upright in heart. Rejoice in the Lord, you righteous, and give thanks at the remembrance of His holy name.” Psalm 97:10-12.

Recognize and hate evil. There is coming a day when it will cease to exist, and Jesus will be glorified.

“And being found in appearance as a man, He humbled Himself and became obedient to the point of death, even the death of the cross. Therefore God also has highly exalted Him and given Him the name which is above every name, that at the name of Jesus every knee should bow, of those in heaven, and of those on earth, and of those under the earth, and that every tongue should confess that Jesus Christ is Lord, to the glory of God the Father.” Philippians 2:8-11.